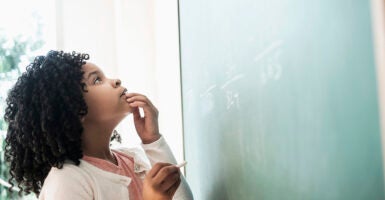 The academic achievement gap between black and white students has proven resistant to most educational policy changes. Some say that educational expenditures explain the gap, but is that true?

Look at educational per pupil expenditures: Baltimore city ranks fifth in the U.S. for per pupil spending at $15,793. The Detroit Public Schools Community District spends more per student than all but eight of the nation’s 100 largest school districts, or $14,259. New York City spends $26,588 per pupil, and Washington, D.C., spends $21,974.

There appears to be little relationship between educational expenditures and academic achievement.

But what about the performance of students in charter schools? In his recent book, “Charter Schools and Their Enemies,” Thomas Sowell compared 2016-17 scores on the New York state English language arts test.

Thirty percent of Brooklyn’s William Floyd public elementary school third-graders scored well below proficient in English and language arts, but at a Success Academy charter school in the same building, only one did.

Among Success Academy’s fourth-graders, 51% and 43%, respectively, scored proficient and above proficient, while their William Floyd counterparts scored 23% and 6%, respectively.

It’s worthwhile stressing that William Floyd and this Success Academy location have the same address.

Similar high performance can be found in the Manhattan charter school KIPP Infinity Middle School among its sixth-, seventh-, and eighth-graders when compared with that of students at New Design Middle School, a public school at the same location.

Liberals believe integration is a necessary condition for black academic excellence. Public charter schools such as those mentioned above belie that vision.

There’s little question that many charter schools provide superior educational opportunities for black youngsters. Here is my question: Why do black people, as a group, accept the attack on charter schools?

New York City Mayor Bill de Blasio explicitly campaigned against charter schools, saying: “I am angry about the privatizers. I am sick and tired of these efforts to privatize a precious thing we need—public education.”

The New York Times article went on to say, “Over 100,000 students in hundreds of the city’s charter schools are doing well on state tests, and tens of thousands of children are on waiting lists for spots.”

One would think that black politicians and civil rights organizations would support charter schools. The success of many charter schools is unwelcome news to traditional public school officials and teachers unions.

To the contrary, they want to saddle charter schools with the same procedures that make so many public schools a failure.

For example, the National Association for the Advancement of Colored People demands that charter schools “cease expelling students that public schools have a duty to educate.” It wants charter schools to “cease to perpetuate de facto segregation of the highest performing children from those whose aspirations may be high but whose talents are not yet as obvious.”

Most importantly, it wants charter schools to come under the control of teachers unions.