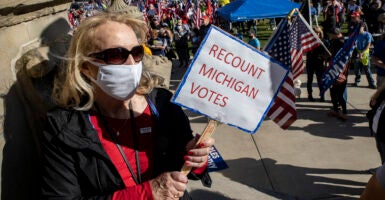 Amid litigation and recounts in the presidential election, significant attention is focused on a Denver-based company with strong political ties.

All those states have seen razor-thin margins in returns from the presidential election, which is officially undecided.

The company controls more than one-third of the voting machine market in the United States, according to multiple news reports.

According to Dominion’s website, its machines also are used in the states of California, Utah, Alaska, Colorado, New Mexico, Illinois, New York, and New Jersey, plus Puerto Rico.

Election officials found specific glitches in Michigan and Georgia, but the company says that’s not the fault of the equipment.

“There are no credible reports or evidence of any system software errors in Georgia or Michigan, including erroneous reporting of unofficial results from Antrim County, Michigan,” Dominion said in a statement linked on its website, adding:

Claims about software updates being done the night before Election Day are 100% false.

Major media outlets projected Saturday that former Vice President Joe Biden won the presidential election. But with close margins in several states, President Donald Trump has not conceded and officials have not certified vote tallies as litigation by the Trump campaign continues.

Here are four key things to know about Dominion, the voting machine manufacturer that is causing such a stir.

Antrim County, a predominantly Republican county in Northern Michigan that went to Trump with 62% of the vote in 2016, flipped to Biden on Election Day, when the count initially gave the former vice president 6,000 votes that actually belonged to Trump.

After red flags went up, county election officials did a hand recount of ballots and determined that Trump actually won with 56%, the Detroit Free Press reported.

Most of Michigan’s other 82 counties also use Dominion voting machines. In unofficial results, Biden defeated Trump in Michigan by 50.6% to 47.9%.

“This was an isolated error, there is no evidence this user error occurred elsewhere in the state, and if it did it would be caught during county canvasses, which are conducted by bipartisan boards of county canvassers,” the office of Michigan Secretary of State Jocelyn Benson, a Democrat, said in a written statement.

But the Michigan Repuplican Party called for further investigation in other counties.

Dominion responded: “The Georgia Secretary of State’s office continues to publicly affirm that there are no widespread issues.”

2. Ties to Clintons, Pelosi, and McConnell

It’s not entirely unusual for a major company to have ties to political leaders—often on both sides. Dominion apparently is no exception here.

The Clinton Foundation, run by former President Bill Clinton; his wife, former Secretary of State Hillary Clinton; and his daughter, Chelsea Clinton, includes a laudatory post about Dominion on its website.

“In 2014, Dominion Voting [Systems] committed to providing emerging and post-conflict democracies with access to voting technology through its philanthropic support to the DELIAN Project, as many emerging democracies suffer from post-electoral violence due to the delay in the publishing of election results,” the Clinton Foundation post says, adding:

Over the next three years, Dominion Voting will support election technology pilots with donated Automated Voting Machines (AVM), providing an improved electoral process, and therefore safer elections. As a large number of election staff are women, there will be an emphasis on training women, who will be the first to benefit from the skills transfer training and use of AVMs. It is estimated that 100 women will directly benefit from election technology skills training per pilot election.

The firm includes lobbyists David Cohen and Brian Wild, who also lobby for Dominion and contributed $2,000 and $1,000, respectively, to the 2020 campaign of Senate Majority Leader Mitch McConnell, R-Ky., according to the left-leaning site Truth Out.

Close political ties pose a danger of a conflict of interest for a company in charge of getting the votes right, said Ty McCoy, a former assistant secretary of the Air Force who is vice chairman of the Cyber, Space, and Intelligence Association.

“Allowing people with strong political views to essentially count the votes when they are politically connected is almost like allowing a defense contractor to sit in on meetings where the Pentagon decides what weapons systems to use. It’s highly improper,” McCoy told The Daily Signal.

One of the rumors traveling on the internet before Election Day was that liberal financier and philanthropist George Soros owned Dominion. He doesn’t. There is a link between the two, though.

Two partners, John Poulos and James Hoover, founded Dominion Voting Systems in 2000 in Toronto. The company is headquartered in Denver.

Dominion entered a 2009 contract with Smartmatic, which builds and implements electronic voting systems, and provided it with optical scanners used in the 2010 election in the Philippines, Accesswire reported.

Lawsuits in the Philippines ensued over glitches and allegations of fraud. An independent review of the source codes used in the machines found numerous problems. The review said, “The software inventory provided by Smartmatic is inadequate, … which brings into question the software credibility.”

The chairman of Smartmatic is Mark Malloch-Brown, a member of the British House of Lords, who also is a member of the Global Board of the Soros-founded Open Society Foundations, The Associated Press reported.

Texas rejected Dominion’s voting machines twice, in 2013 and again in 2019. Two state offices discovered what they called “multiple hardware and software issues that preclude the Office of the Texas Secretary of State from determining that [Dominion’s] Democracy Suite 5.5-A system satisfies each of the voting-system requirements set forth in the Texas Election Code.”

In October 2019, the Office of the Texas Secretary of State explained that Dominion didn’t meet certification requirements under the Texas election code.

“The examiner reports identified multiple hardware and software issues that preclude the Office of the Texas Secretary of State from determining that the Democracy Suite 5.5-A system satisfies each of the voting-system requirements set forth in the Texas Election Code,” the statement says, adding:

Specifically, the examiner reports raise concerns about whether the Democracy Suite 5.5-A system is suitable for its intended purpose; operates efficiently and accurately; and is safe from fraudulent or unauthorized manipulation. Therefore, the Democracy Suite 5.5-A system and corresponding hardware devices do not meet the standards for certification prescribed by Section 122.001 of the Texas Election Code.

In its postelection statement, Dominion asserts that the equipment was approved elsewhere.

“Dominion’s Democracy 5.5 system, the one used in Georgia, was approved by the National Elections Assistance Commission in 2018. The next year, it failed certification in Texas,” the company’s statement says.