Memo to the Supreme Court: Keep the Faithful Free to Foster 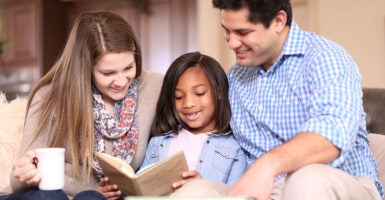 Foster families provide lifesaving care to hundreds of thousands of children each and every year in the United States. Sadly, more children are in need than there are families ready to provide care.

To best serve these children, public policy needs to maximize the number and diversity of foster agencies (including faith-based agencies). This increases recruitment efforts from diverse pools of parents and increases the number of foster families.

Right now, 250 kids in Philadelphia are waiting for families to open their homes to them. And yet, two years ago, the city of Philadelphia stopped one faith-based foster agency, Catholic Social Services, from helping children find homes.

The Supreme Court should protect the freedom of these women to foster, as well as the right of this agency to continue the vital work it has done for more than 200 years.

To fully understand the significance of this case, it’s important to understand how the foster system works. Children in need of assistance are wards of the state, but the state can’t find them homes on its own. So the government partners with a variety of private agencies to recruit, evaluate, and ultimately endorse families for fostering.

In Philadelphia, Catholic Social Services had always ranked at the top of the agencies. But once city officials read in the newspaper that it didn’t endorse same-sex couples to foster, the city refused to work with it anymore.

This has significant impacts on foster parents and the children they serve.

Going through the process to become a foster parent is not like going to the Department of Motor Vehicles to renew your driver’s license. Fostering a child can create practical, economic, social, and spiritual challenges, and so a wide variety of foster agencies can best serve those families.

Faith-based agencies provide unique inspiration and encouragement to foster families and help maximize families for children in need. The government shouldn’t deprive children of their essential services by discriminating against their religious beliefs.

Here are three things to know about Wednesday’s oral arguments at the Supreme Court.

1. No same-sex couple had ever gone to, let alone been turned away by, Catholic Social Services to foster.

What would bother a liberal justice, such as Justice Stephen Breyer, about a Catholic foster care agency having to go all the way to the Supreme Court? Here’s how he put it: “What’s actually bothering me quite a lot about this case is I think that no family has ever been turned down by this agency. Indeed, none has ever applied, no gay family, no gay couple.”

Furthermore, of the 30 foster care agencies in Philadelphia, 29 of them will work with same-sex couples. Wouldn’t a better outcome be a situation where more agencies are able to help children find homes? So what was the real motivation for why the city had to force the Catholic agency out?

If we are honest about what’s really going on here, it’s not about ensuring that same-sex couples in Philadelphia have the opportunity to be foster parents. It’s the fact the City can’t stand the message that Catholic Social Services and the Archdiocese are sending by continuing to adhere to the old fashion view about marriage.

Indeed, comments made by city officials support the conclusion that the city was motivated by animus against traditional religion.

As the legal brief on behalf of the mothers and agency points out, the city official who met with the Catholic leaders “urged them to follow ‘the teachings of Pope Francis,’ (as interpreted by the Commissioner) and told them that ‘times have changed,’ ‘attitudes have changed,’ and [Catholic Social Services] should change its policy because it is ‘not 100 years ago.’”

The brief also points out that the “mayor had previously publicly disparaged the Archdiocese by saying he ‘could care less about the people at the Archdiocese,’ calling Archbishop Chaput’s actions ‘not Christian,’ and exhorting Pope Francis ‘to kick some ass here!’”

This hostility against traditional Catholic beliefs violates the Free Exercise and Free Speech Clauses of the First Amendment to the U.S. Constitution, and the Supreme Court should not allow it to stand.

Indeed, Philadelphia’s hostility toward Catholic Social Services is strikingly similar to the hostility shown in Masterpiece Cakeshop v. Colorado Civil Rights Commission. I noted those parallels in The Wall Street Journal back in 2018:

Catholic Social Services has never received a complaint from a same-sex couple wanting to foster a child. Same-sex couples could foster or adopt a child from another agency. Yet Philadelphia officials were willing to shut down a good agency that causes no harm merely to send a message that its religious beliefs are intolerable—precisely what the Supreme Court in Masterpiece Cakeshop [v. Colorado Civil Rights Commission] said the government may not do.

2. If the city can take over foster care and violate religious liberty, what’s to prevent it from taking over other areas of the public square?

The foster care case raises a troubling question: Can the government take over an area of historic religious exercise and then regulate traditional religious groups out of their historic ministries?

Justice Neil Gorusch asked “whether the City can effectively take over a service that had been provided privately for some time, and taken over so much so that it regulates it pervasively and this [religious liberty] analysis shouldn’t apply at all.”

Justice Amy Coney Barrett then made that question more concrete:

Could the government completely take over the historic health care ministries of churches—and then tell them they must practice medicine the government’s way, or not at all?

It’s not difficult to see how in our ever-growing governmental alphabet soups, historic ministries—on health, education, and welfare, for example—are either being regulated or taken over by government.

The basic facts here are that Catholics have been caring for widows and orphans longer than the City of Brotherly Love has existed. And when it comes to orphan care, Catholic groups have been serving Philadelphia’s children for over 200 years, while the city itself only entered the space 50 years ago.

More than 8,000 faith-based agencies across the country stand to be affected by the Supreme Court’s ruling. Can the government take over an area of historic ministry to the needy and then impose rules and regulations that violate religious liberty?

And if the government can do it with respect to the care of children, why not on medicine as a whole—as Barrett’s question highlights with respect to abortion, but could just as easily apply to physician-assisted suicide and assisted reproductive technologies, for example.

3. The race analogy does not apply here.

Many commentators try to force an analogy on same-sex marriage to interracial marriage. As I wrote in the Georgetown Journal of Law and Public Policy, that analogy fails miserably.

As Alito asked U.S. Department of Justice lawyer Hashim Mooppan: “Didn’t the Court say that there are honorable and respectable reasons for continuing to oppose same-sex marriage? Would the Court say the same thing about interracial marriage?”

Mooppan replied: “Obergefell [v. Hodges] does say that. Loving [v. Virginia], of course, didn’t say that and never would have said that.”

Here’s the exact language Alito was paraphrasing. Justice Anthony Kennedy, in his majority opinion in Obergefell v. Hodges, noted that “many who deem same-sex marriage to be wrong reach that conclusion based on decent and honorable religious or philosophical premises, and neither they nor their beliefs are disparaged here.”

He went on to acknowledge that support for male-female marriage was held “in good faith by reasonable and sincere people here and throughout the world.”

Instead, it said that when it came to bans on interracial marriage, “There is patently no legitimate overriding purpose independent of invidious racial discrimination.”

Kennedy pointed out in oral arguments in Masterpiece Cakeshop v. Colorado that “tolerance is essential in a free society.” But, he continued, “it seems to me that the state in its position here has neither been tolerant nor respectful of Mr. Phillips’s religious beliefs.” The same is true with respect to the city of Philadelphia and Catholic Social Services.

It seems like this case requires us to think about the balance between two very important rights recognized by this Court, the religious exercise and belief right, obviously, in the First Amendment, and the same-sex marriage right, as recognized in Obergefell.

And it seems when those rights come into conflict, all levels of government should be careful and should often, where possible and appropriate, look for ways to accommodate both interests in reasonable ways. It’s a very—you know, it’s very sensitive, controversial. There are strong—very strong feelings on all sides that warrant respect.

And it seems like we and governments should be looking, where possible, for win-win answers, recognizing that neither side is going to win completely on these issues given the First Amendment on the one hand and given Obergefell on the other.

And what I fear here is that the absolutist and extreme position that you’re articulating would require us to go back on the promise of respect for religious believers.

Whenever possible, we should seek to live peaceably with our neighbors even when disagreeing on important issues.

For those who support same-sex marriage and parenting, there was a win-win offer. Twenty-nine of the 30 foster care agencies in Philadelphia served same-sex couples, and so any same-sex couple seeking to foster a child could work with them. But why force the one agency with traditional beliefs about marriage to either violate its beliefs or simply stop helping children in need?

That’s not a win-win, but an attempt at imposing a sexual orthodoxy on the nation.

When the Supreme Court redefined marriage in 2015, it said that support for the historic understanding of marriage was based on “decent and honorable” beliefs, and that neither the people who support traditional marriage nor their beliefs “are disparaged here.”

Now the Supreme Court must decide if the city of Philadelphia may disparage such people and their beliefs at the expense of children in great need.

The Supreme Court should uphold the Constitution’s protection of religious freedom by allowing all to foster. Doing so will also serve children best. A win-win.