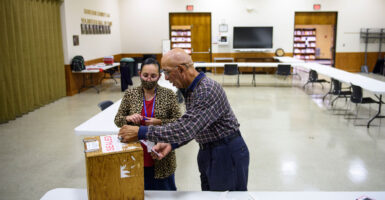 Volunteers seal a ballot box Tuesday at the O.P. Owens Agricultural Center before bringing the information to the Robeson County Board of Elections in Lumberton, North Carolina. (Photo: Melissa Sue Gerrits/Getty Images)

While most of America focuses on the presidential election, some huge issues are being decided in states around the country through ballot measures and propositions.

It’s easy to forget as the nation obsesses over who occupies the White House that most policies and laws are set at the state and local level.

And given that we have a federalist system, whereby states are free to choose their own laws, a wide gap of policies and outcomes can exist from state to state.

Many ballot questions were decided by voters Tuesday. Here is a roundup of some of the most significant ones.

One of the ballot measures receiving the most attention is California’s Proposition 16. This measure, if passed, would overturn Proposition 209, which prohibited state government and institutions from giving preferential treatment to people based on race or sex. It would officially bring back affirmative action to California.

Although affirmative action is an old idea, it has been given new life by the so-called anti-racist movement.

Leading anti-racists, like Ibram X. Kendi, the director of the Center for Antiracist Research at Boston University and the author of “How to Be an Antiracist,” argue that discrimination is a good thing if it helps create “equity” and corrects for past grievances and oppression.

However, evidence suggests that affirmative action programs, besides being out of step with American ideas about equal rights, don’t actually help the people they are intended to.

The Heritage Foundation noted that following the passage of Proposition 209 in 1996, college drop out rates for black and Hispanic students dropped significantly even as their numbers in colleges dipped slightly:

While minority students did drop from 58.6 percent of the student body to 48.7 percent, white students made up a bare majority, and Asian-Americans came in second at 38 percent. What happened to the other minorities?

Virginia and Missouri both have ballot measures to change the way they draw up congressional districts. Instead of allowing them to be drawn up as a part of the normal political process, it would be handed over to a commission.

Those who back these sorts of measures, which have been used in states like California, argue that they would put an end to partisan “gerrymandering.” That is, carving up irregularly shaped districts to ensure political victories.

However, it’s almost impossible to take politics out of politics, and handing over the process to a commission does not ensure that districts will be free from bias or partisanship regardless.

I wrote in 2017 about how this process can be corrupted too:

Robert D. Loevy, a retired professor and former Colorado redistricting commissioner, wrote in his book ‘Confessions of a Reapportionment Commissioner‘ that the independent commission guidelines for fair apportionment were essentially a ‘sham.’

Politicking persisted as parties tried to stack or manipulate the commissions to suit their interests, just as they had used their power to create more favorable districts through gerrymandering. The process just became less apparent on the surface and further out of the view of the public.

Other states have tried similar ‘fixes,’ and yet, despite proliferating ‘nonpartisan’ and ‘citizen’ commissions and panels, redistricting generally remains as partisan as ever.

The measures passed in Virginia and Missouri.

A ballot proposition in Florida would raise the minimum wage in the state to $15 by the year 2026. The state’s current minimum wage is $8.56.

The state already has been hit hard by business closures and job losses due to COVID-19 shutdowns.

According to The Wall Street Journal:

Florida had 451,000 fewer jobs in September, compared with a year earlier, according to the U.S. Labor Department, including 235,000 fewer jobs in the hospitality industry, which includes restaurants, hotels and theme parks.

“Fight for $15” has been a huge rallying cry for minimum wage proponents who argue that raising it will help workers. However, some studies show that a $15 minimum wage actually depresses employment, especially for lower-income workers.

The initiative passed, according to WTSP, a Tampa Bay area CBS affiliate.

States around the country had various proposals to legalize drugs.

The District of Columbia’s Initiative 81 would legalize hallucinogenic mushrooms, and Oregon’s Measure 211 would decriminalize all recreational drugs including heroin, cocaine, and methamphetamines.

Both the District of Columbia and Oregon measures passed.