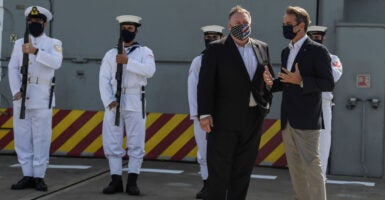 NATO has announced that in 2020, 10 countries will spend at least 2% of gross domestic product on defense—a major improvement compared to 2016. Pictured: Secretary of State Mike Pompeo, left, and Greek Prime Minister Kyriakos Mitsotakis visit a Greek naval frigate on Sept. 29. The U.S. and Greece have spent the largest percentage of gross domestic product on defense in the NATO alliance this year. (Photo: Aris Messinis/Pool/AFP/Getty Images)

President Donald Trump has placed a significant emphasis on the need for increased defense spending among NATO allies, and the newest data suggests his efforts are paying off.

In 2016, non-U.S. NATO members spent $262 billion on defense; in 2020, they will spend $313 billion. Regardless of whether this increase resulted from changing threat perceptions or Trump’s laser-like focus on inadequate defense spending, or of some combination of the two, the results speak for themselves. The $50 billion increase is equivalent to the entire defense budget of France.

And that is just one year. Since 2016, NATO Secretary-General Jens Stoltenberg noted that European allies and Canada will have added $130 billion to their defense budgets.

As an intergovernmental security alliance, NATO is only as strong as its member states. Weak defense spending in Europe beginning with the end of the Cold War led to a significant loss of capabilities and embarrassing gaps in readiness for NATO allies, and American presidents of both political parties have long called for increases in defense spending by NATO allies.

Article 3 of the treaty that established NATO states that members will, at a minimum, “maintain and develop their individual and collective capacity to resist armed attack.” Only a handful of NATO members can say they have lived up to this.

Interestingly, Secretary of Defense Mark Esper and national security adviser Robert O’Brien have recently noted that the NATO benchmarks have become the “gold standard” for other U.S. allies, importantly in the Pacific region.

In 2016, only four NATO members (including the U.S.) met the benchmark to spend 2% of GDP on defense, and only nine spent 20% of defense budgets on equipment purchases.

Last week, NATO announced that in 2020, 10 countries will spend at least 2% of gross domestic product on defense:

Additionally, 16 NATO allies will spend 20% of their defense budgets on “major new capabilities.”

Reaching the spending benchmarks and fulfilling the Article 3 obligation requires the political, economic, and societal will to invest in defense. In recent years, a number of U.S. allies have stepped up and fulfilled their commitments—an important achievement for U.S. policy in Europe.

Other nations in the NATO alliance have not done so, or do not yet have a plan to do so. There are a number of steps NATO and the U.S. can take to encourage NATO members to further increase defense spending in a realistic and timely way.

Failure to reach these benchmarks should not dampen U.S. support for the alliance, or its active leadership within NATO. The U.S. remains in Europe and a leader in the alliance because it is in America’s national interest to do so.

A peaceful, stable Europe has paid economic, cultural, and military dividends far greater than the amounts the U.S. spends on military personnel and basing on the Continent.

It is possible for the U.S. to remain entirely committed to NATO’s collective defense and encourage allies to increase defense spending to boost readiness and fund much-needed capabilities. More work needs to be done, but NATO’s recent data shows a continuance of defense reinvestment for some allies.

Hopefully, this trend will continue in 2021.