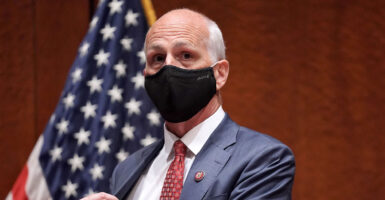 “If the reason that you want a 20% cut in the defense budget is because you see the U.S. military as a fundamentally destabilizing force in the world, then I’m not going to be there.”

He was addressing the progressive wing of the Democratic Party, which earlier this year tried to cut the defense budget by 10%, even though it could not cite a legitimate strategic reason for doing so. Cooler heads at the time prevailed, and the effort failed dramatically, going down 324-93 in the House, and 77-23 in the Senate.

The progressive wing is currently organized under the Congressional Progressive Caucus. One of its co-chairs, Rep. Pramila Jayapal, D-Wash., stated that a top priority for the group in the coming 117th Congress is “to really get some meaningful budget cuts in Pentagon spending this next cycle.”

Strikingly absent from her statement or those of the movement’s other leaders is any reference to why the United States maintains a military force in the first place, what its impact on the globe is, or how the nation’s force size allows us to realize our current National Defense Strategy—not to mention what would happen to that force with a big cut.

But those are the very elements that should be considered when determining the level of the defense budget.

As James Carafano, vice president for foreign and defense policy studies at The Heritage Foundation, has said, “The cost of defense should rise or fall in proportion to the security threats facing our nation. And, by that measure, it is abundantly clear that we should be spending more—not less—on our defense.”

Led by Russia and China, the security threats facing the U.S. are trying their best to protect and advance autocracies and oppressive regimes. It was only three years ago when the country shifted its primary focus from terrorism toward great power competition, with the publication of the Trump administration’s 2017 National Security Strategy.

As The Heritage Foundation’s Index of U.S. Military Strength affirms, to execute the shift to great power competition and to rebuild our depleted forces in the wake of our wars in the Middle East, our military needs additional resources allocated to modernization, increase its size, and increase its readiness levels.

Now is not the time to rest on the laurels of the past efforts of the Department of Defense. Rather, it is time to take those actions necessary to ensure that the U.S. military is suitably prepared and organized for the coming challenges. Forming the U.S. Space Force a year ago was a good first step in that direction.

Instead of discussing how to reduce the defense budget simply because the number looks big—or because some have designs to divert the funding to their pet causes—the nation should focus on understanding the threats posed by Russia and China around the globe, both today and in the future, and ensure that our military is on the right path to counter those threats.

From prepositioning troops and assets in Eastern Europe to freedom of navigation operations in the South China Sea, the American armed forces play an essential role in maintaining global stability. It is that stability that has enabled the unrivaled prosperity of the last few decades.

Unilaterally reducing our defense budget while maintaining the same goals and missions for our armed forces would be an invitation for our adversaries to challenge our resolve and our commitments abroad. Both our conventional and strategic deterrence has to promote global stability and prosperity.

Does that mean that defense budgets should go on autopilot, with constant increases every year? No. Our defense leaders must justify every dollar, explain every instance of waste or abuse, and be constantly seeking opportunities for savings and efficiencies.

But once they have met those requirements, the nation should be prepared to resource the necessary national security needs of the nation.

It is up to the American people to hold their elected officials accountable to properly provide for our national defense.