Our National Interest and the South China Sea 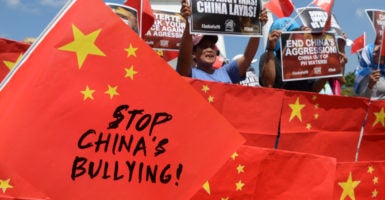 Activists display anti-China placards and flags during a protest at a park in Manila on June 18, after a Chinese vessel last week collided with a Philippine fishing boat which sank in the South China Sea and sailed away sparking outrage. (Photo: Ted Alibe /AFP/Getty Images)

It’s difficult to explain how a country goes about defining its national interests.

Sure, we know the policy processes. We know the considerations. Interests in borders, war, and peace are easy to understand. But why are other, more abstract interests, such as American concern for the freedom of navigation in a far-flung place like the South China Sea, so enduring?

I could make a wonky argument around the free flow of trade and the global commons, the need to maintain access for warships required in the defense of American allies, and regional stability.

But the more compelling answer may be: “It just is.”

What’s more, it’s not going to change. That’s the lesson to take from the Trump administration’s recent moves in the South China Sea.

The American interest in the freedom of the seas preceded President Donald Trump by more than 200 years and will continue throughout his time in office, and that of his successor, whatever happens in the broader U.S.-China relationship.

It is a timely reminder, because of late, the issue has become more prominent.

The Chinese seem to have doubled down on its maritime claims vis-a-vis America’s allies in the Philippines, no doubt because Philippine President Rodrigo Duterte has proven such an easy mark.

Chinese maritime militias have swarmed fishing vessels around islands held and governed by the Philippines, made multiple unlawful transits through Philippine waters, and deployed survey ships in the Philippines’ exclusive economic zone.

Things are also simmering between China and Vietnam. The Chinese coast guard is harassing non-Chinese drilling activity off the coast of Vietnam. It has also begun its own, unauthorized oil and gas survey, similar to one in 2014, when such activity provoked a serious crisis between the two countries.

The Vietnamese have been less obsequious than Duterte, who this week staged an exchange of views on the issue with Chinese Communist Party chief Xi Jinping in Beijing. The Vietnamese, by contrast, have loudly condemned the activity and explicitly sought the support of the international community.

In fairness to the Filipinos, the Vietnamese themselves have a communist government whose dealings with China are far from transparent. It is impossible to know what is happening behind the scenes between Hanoi and Beijing.

Nevertheless, the international support Vietnam requested has been forthcoming. The U.S. issued a couple of very strong statements. The Australians have as well. Even the Europeans—the U.K., Germany and France—agreed to a joint statement, albeit a gentle one.

As for the operational side of an international response, the U.K. and especially France have been helpful. The real push, however, has long come from the U.S., and since coming to office, the Trump administration has intensified it.

The U.S. has carried out at least 15 China-related freedom of navigation exercises in the South China Sea since 2017—the most recent just last weekend.

Now, the almost-Pavlovian response from American Asia watchers is that those exercises “are not a strategy.”

Critics of the previous administration made similar complaints about President Barack Obama’s (far fewer) exercises. Sure, they’re right, but they have lost sight of the broader context.

There are a heck of a lot of other related things going on, too. The Trump administration is responding vigorously to Chinese designs across American interests, from Taiwan to cybersecurity. It’s much more active on human rights than generally credited with. And on trade, you may disagree with his tactics—and I most certainly do—but you can’t say Trump is not doing anything.

Most importantly, the administration is in the midst of a multiyear effort to rebuild the American military and expand its presence in the Western Pacific. Secretary of Defense Mark Esper testified to this anew last week at the U.S. Naval War College, where he also repeated the bipartisan American mantra that the U.S. will “fly, sail, and operate wherever international rules allow.”

Besides, no administration develops and implements a strategy as meticulously as critics dream.

We have a National Security Strategy, a National Defense Strategy, and a Defense Department Indo-Pacific Strategy. That’s all to the good. They make clear to the world where our priorities lie. They help properly distribute resources. But documents like these do not exactly lie dog-eared and worn on the desks of any administration’s practitioners.

American foreign policy is about promoting and protecting American interests. Explaining why, since the War of 1812, freedom of the seas has ranked so prominently among them is complicated and not necessarily convincing.

The best guide to understanding U.S. interests is its track record. Trump no less—and perhaps more—than his predecessors has prioritized free navigation in the South China Sea.

If you’re sitting in Beijing or Manila or Hanoi—or London, Paris, or Berlin for that matter—you should consider American vigor in its defense a permanent part of the operating environment.