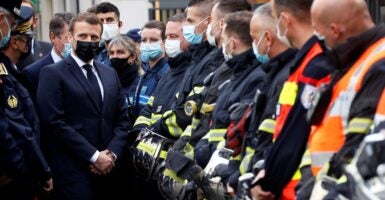 French President Emmanuel Macron (left) on Oct. 29 visits the scene of an attack by an Islamic terrorist at the Basilica of Notre-Dame de Nice in Nice, France, that left three dead. (Photo: Eric Gaillard/Agence France-Presse/Getty Images)

Samuel Paty was brutally decapitated Oct. 16 outside a middle school in a north Paris suburb where he worked.

Paty, 47, a history and geography teacher, was targeted by an 18-year-old Muslim incensed that Paty had shown his class controversial cartoons from the French satirical magazine Charlie Hebdo.

The Paty incident would soon become part of a new wave of Islamist violence in France. On Thursday, a man with a knife entered a church and killed three in Nice, France.

One of the victims was said to be “virtually beheaded” in a similar fashion to what happened to Paty. The suspect, whot and wounded by police, was reported to have repeated the phrase “Allahu Akbar,” the Arabic chant of “God is greater,” over and over.

These violent incidents follow on the heels of a Sept. 25 attack in which a Pakistani Muslim teenager walked up to two bystanders in the 11th Arrondissement (governmental administrative district) in Paris and slashed them with a knife, sending them to the hospital with serious injuries.

Paris is no stranger to violent crime, but this was not a random attack. The September crime took place outside the old Charlie Hebdo offices that were the site of a massacre just five years earlier, when Islamist gunmen killed 12 people and injured 11 others.

The terrorists said they acted in response to the magazine’s depiction of the Islamic Prophet Mohammed and what they perceived to be the mocking of Islam.

The attack spurred a wave of jihadist violence in France, including a hostage situation in a kosher supermarket, where a gunman killed four Jewish shoppers before being killed by police.

The Pakistani teen in the Sept. 25 attack claimed the slashings were “in the context of the republication of the cartoons.” Those cartoons are the same images of Mohammed that the 2015 attackers cited to justify their act of mass murder.

The two newest attacks likely stemmed from the trial of 14 people suspected of helping the terrorists carry out the attacks on Charlie Hebdo and the kosher supermarket. The trial began at the end of September.

To commemorate the victims and as an act of defiance, Charlie Hebdo republished some of the original cartoons that motivated the 2015 massacre.

In the wake of the original Charlie Hebdo slayings, France finds the threat of radical Islamist terrorism forever locked into the national psyche. French citizens are uniquely at risk of being targeted by Muslim extremists.

As research produced by leading British counterterrorism expert Robin Simcox noted, “The threat in France has consistently increased from year to year … . This is not just because of an increase in the number of plots facing Europe overall. Over one-quarter (27%) of all plots against Europe in 2014 were focused on France.”

“President Macron’s decision to actively shut down pro-terrorist groups in France is an important step in curtailing Islamist violence,” he said. “French anti-terrorism forces are some of the best in the world, and they are well-prepared to protect the French people.”