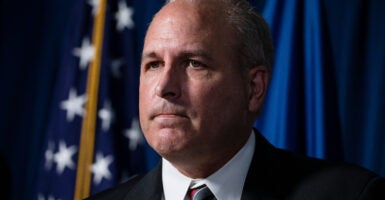 Rather than going after Mark Morgan for battling every day to keep everyday Americans free, safe, and prosperous, his critics should pay more attention to the significant accomplishments made under his tenure to deliver better borders for all of us.

Morgan is the commissioner of U.S. Customs and Border Protection. That would be the 60,000 men and women who every day monitor and guard our borders so that goods and services and legitimate travelers cross as speedily as possible, while stopping the criminals and smugglers, who are harmful and dangerous to all of us.

Morgan’s entire professional life has been dedicated to selfless service. He started in the Marine Corps and served in the FBI before coming to the Department Homeland Security, of which CBP is a part. His credentials are top of the line, and he’s a proven and responsible leader. Under his tenure, the border has been better secured.

Nothing in Morgan’s track record and performance in office, however, has stopped him from being unfairly targeted and criticized.

When the possibility of amnesty for illegal immigrants came up in the presidential debate, it highlighted that even the promise of amnesty complicates securing the border.

Human traffickers would use the possibility of amnesty as a massive advertising tool. They will try to flood the border, not just with a new wave of illegal migration, but also to open opportunities for smuggling fentanyl and other dangerous drugs.

This administration rejects amnesty, as it should, sparking endless criticism from the left. Morgan also defended the administration’s policy of ending “catch and release.”

The end of “catch and release” serves as a powerful deterrent against illegal border crossing. Morgan tweeted that resuming it would trigger an “invasion.”

One House member running for reelection immediately accused him of “racism.”

Securing the border is anything but racist or hateful conduct. Everyone suffers when the cartels and transnational gangs run wild on the U.S.-Mexico border.

Those violent, brutal criminal enterprises employ “coyotes” to run human smuggling and illegal crossings at the border, using the profits to finance their other criminal activities, including smuggling of drugs and guns, prostitution, and money laundering.

The greatest victims are the migrants themselves, who are at risk of rape, assault, disease, exposure, extortion, human slavery, and death. Knowing the loopholes in our immigration system, smugglers traffic children to help fraudulent family units easily enter the U.S.

American communities are also victimized by the many crimes that attend transnational criminal activities, from car theft to gang violence.

It’s disturbing to see members of Congress go after the messenger, rather than work with the administration to address the problem.

Censoring government officials who are trying to enforce the law and ensure public safety is also deeply troubling.

When social media platforms take such actions, warns The Heritage Foundation’s technology expert, Klon Kitchen, they are rightly “viewed as biased and untrustworthy.”

Much has been done over the past four years to build a better border, and Morgan has been a key factor in that success.

Americans should be working together to build on that legacy, not degrade the effort with calumnies.