‘Gloves Are Off’ With Border Security Under Trump, Top Official Says 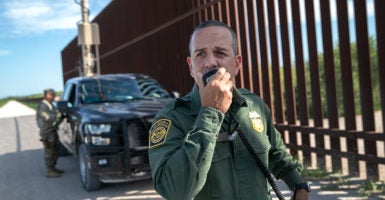 The Obama and Trump administrations couldn’t be further apart on the issue of border security and immigration. One man knows that from firsthand experience. Mark Morgan served as chief of Border Patrol under President Barack Obama, and now works for President Donald Trump as acting commissioner of U.S. Customs and Border Protection.

Today, Morgan joins the podcast in a special edition from President’s Club, an annual gathering of Heritage Foundation supporters in Washington. Morgan describes the progress being made under Trump and the night-and-day difference between the two administrations. This interview begins at 23:15.

Rachel del Guidice: We’re honored to be joined today on The Daily Signal Podcast by Mark Morgan, the chief operating officer and acting commissioner of U.S. Customs and Border Protection.

Commissioner Morgan, thank you so much for being with us today.

Mark Morgan: Thank you for having me.

del Guidice: So it’s no secret, we all know that we do have a humanitarian crisis at the southern border. The Washington Post, they had a piece out this week saying that there’s a surge of Mexican immigrants at the border. What’s your current perspective on the situation at the border right now?

Morgan: Here’s what I’ll say, and it’s very important, although we’ve made tremendous progress in the last four months … Again, if you recall in May, we were at our highest—144,000 in one month. It wasn’t unusual to have over 5,000 apprehensions in a single day.

Fast forward now four months later, that has dropped almost 65%. Last month, we had about 52,000 apprehensions for the month. That’s a dramatic shift.

That’s absolutely due to this president and this administration efforts, the network of rules and policies and initiatives that have directly led to this decrease. As well as our partnership with the government of Mexico, the Northern Triangle countries.

But make no mistake, we’re not out of the water yet. There is still a tremendous amount of work to be done, with the increase in Mexican families we’re seeing now, a slow increase. What that should alert the American people to is that the cartels, the human smuggling organizations, they are smart and they’re flexible.

As soon as we start to cut off the flow for the Northern Triangle countries … we know that they’re using social media now to encourage Mexican families to start coming across illegally. So although we’ve made tremendous progress, we’re not done yet.

del Guidice: So in regard to not being done yet, is there a specific facet of what’s happening at the border that concerns you the most? If there’s one thing that you say, “This is top of mind for me,” what would that issue be?

Morgan: Yeah, Congress has failed the American people. That’s at the top of my list.

Look, we’ve got the government of Mexico that has stepped up in unprecedented ways. Over 25,000 troops. They probably are going to double their apprehensions at their southern border this calendar year. They are absolutely targeting the smuggling routes. They’re stopping large groups coming in.

In May, we had between 40 to 50 large groups. Last month, we had one. Just a couple weeks ago, we had a caravan starting to come together of over a thousand. Mexican troops went right in there and absolutely disbanded that.

So look, Mexico is doing an incredible job. We have the agreements with the Northern Triangle countries. They’re really stepping up to do this and really [looking] at this as a regional crisis and being partners.

del Guidice: You’ve been critical of the judicial activism that we’ve seen with the courts getting involved in affecting border policy. What can be done in this area?

Morgan: I harken back to my law school days. I like to put things [simplistically]. I learned my first few days of law school … judges, courts are supposed to interpret the law, not make the law. That’s what we’ve seen. We’ve seen, again, an unprecedented amount of judicial activism during this administration, and every single time.

So we have both ends. We have Congress on one end that’s failed to do their job, and judicial activism on the other that every time this administration, this president tries to implement a new rule, a new policy, new regulations, it’s shot down.

The judicial activism should scare every single citizen in this country. These individuals are not elected, but yet they are legislating from the bench. That’s scary.

del Guidice: What role does [Customs and Border Protection] play in preventing drugs from coming over the border. And how big is this problem, and what do we need to do? I know a lot of people across this country find it very concerning. So what is the role you all play in that?

Morgan: That’s a great question. I’ll tell you what, we need to talk about this more because when we talk about how we secure the southwest border, the wall, it’s always in the realm of talking about illegal immigration. What we don’t talk enough about is the national security crisis part of that, the illicit drugs.

ICE [Immigration and Customs Enforcement] just a couple of weeks ago, they did interior enforcement operations in six Midwest states—Missouri [was] one of them, my home state. They caught almost a hundred illegal aliens. A hundred criminal illegal aliens that were here illegally and committed additional crimes. And guess what? There were absolutely individuals who were smuggling drugs through this.

So last year, I’ll give you another stat, 910,000 kilograms of illicit drugs [Customs and Border Protection] sees in one year—910,000 kilograms. This year, even though up to 50% of the Border Patrol resources were taken off the line due to humanitarian [needs], I removed 731 officers out of ports.

Even with all those resources going this year … That is something that’s killing American citizens every single day. [Customs and Border Protection is] on the front lines of that.

del Guidice: For some reason, you never hear this reported on mainstream media. It’s all about the concentration camps at the border. You don’t hear about all these drugs that are being apprehended and keeping Americans safer.

Morgan: That’s exactly right. I’ll even go back. Remember, it wasn’t that long ago where we were told that this was a manufactured crisis on the humanitarian side. And then when they came … the facts were there and they couldn’t deny that, well then, what they said is, “Well, it’s a humanitarian crisis.”

We’ve been saying the law enforcement, specifically [Customs and Border Protection], we’ve been saying forever, this is a dual-front crisis. It’s both a humanitarian and national security crisis.

How come we’re not talking about this every single day? Sixty-eight thousand Americans died last year to drug overdose, and an overwhelming amount of drugs are pouring into this country from the southwest border.

del Guidice: That’s very true. Ten years ago, Democrats in Congress, like [Sen.] Chuck Schumer, they were very supportive of a border wall, which isn’t the case anymore. You mentioned that Congress has failed in its job to secure the border, to have good immigration policy that they’ve worked on. Why is this the case, do you think?

Morgan: Look, from a law enforcement perspective, I don’t want to weigh in politics. I’ll let people decide that for themselves. But you just said it. I think it’s common sense.

So 2005, we had bipartisan support for the Secure Fence Act that led to 654 miles of wall being built. Fast forward now, and this current president is in power, and now all of a sudden, the wall is immoral and ineffective. It’s hypocrisy and it’s a lie.

The wall is part of a multi-layer strategy example of infrastructure, technology, and personnel. It works. We can give you data and facts that everywhere that those three elements have been applied effectively, illegal immigration has gone down, illegal drug entry in this country has gone down, and assaults of agents have gone down. It works.

del Guidice: Final question. You were the Border Patrol chief under President Barack Obama. How have things changed … looking at the past administration you served in and the administration you’re in now? And what are your reflections from these two different times that you’ve been serving our country in?

Morgan: My reflections, it’s almost 180 degrees. It’s a priority. Both maintaining the rule of law, maintaining the integrity of our current immigration system, and ensuring the safety of this country. And that our hands aren’t tied anymore with selective enforcement.

It means, look, if someone is here illegally, we’re going to enforce the rule of law, whether we apprehend you at the border or interior enforcement. Your hands aren’t going to be tied [as though] you can only enforce someone here that’s illegal if they fit into this certain category. The gloves are off.

I think more importantly though, it’s just become a priority. … This administration realized the importance of securing our borders and to safeguard every citizen in this country. That’s the major difference.

del Guidice: Well, Commissioner Morgan, thank you so much for being with us on The Daily Signal Podcast.

Morgan: Thank you for having me.