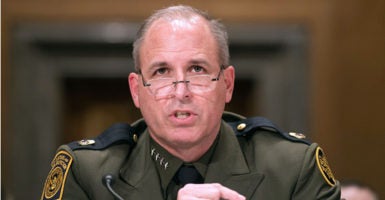 Mark Morgan, then chief of the U.S. Border Patrol, testifies Nov. 30, 2016, before the Senate Homeland Security and Governmental Affairs Committee. President Donald Trump announced over the weekend that Morgan is his choice for director of Immigration and Customs Enforcement. (Photo: Nicholas Kamm/AFP/Getty Images)

President Donald Trump’s choice to run U.S. Immigration and Customs Enforcement potentially could draw bipartisan support in the Senate confirmation process for his time working on related issues in the Obama administration.

Mark Morgan also backs Trump on the need for a border wall and says Congress could enact a legislative solution to address 85% of the border crisis.

In an interview last week with The Daily Signal, before Trump announced plans to nominate him as ICE director, the former Border Patrol chief and veteran FBI agent said illegal immigration must be tackled from two sides.

“First of all, it’s absolutely a national emergency and here’s a couple things,” Morgan said. “One thing gets lost in the narrative …  they really only talk about one element of the crisis and that’s the humanitarian side, and what’s lost is it’s a dual crisis. It’s both a humanitarian and national security threat.”

ICE, which many Democrats say they want to see abolished, is the agency in charge of interior enforcement of immigration laws, as well as arresting, detaining, and deporting illegal immigrants.

Here are four things to know about Morgan.

In his interview with The Daily Signal, Morgan talked about how Congress could address the growing problems at the southern border.

“With a legislative fix, they could address the Flores Settlement Agreement and TVPRA [Trafficking Victims Protection Reauthorization Act],” Morgan said during the interview with Robert Bluey, executive editor of The Daily Signal. “Put everything else aside, Congress does those two things in 15 minutes, catch [and] release ends, and 85% of the humanitarian crisis ends the next day. That’s what Congress needs to do, and they need to do it tomorrow.”

As ICE director, whether confirmed by the Senate or in an acting role, Morgan could have influence in making a case to Congress about closing immigration loopholes that force the catch-and-release process for illegal immigrants.

In 1997, the Clinton administration entered into the Flores Settlement Agreement, which ended a class action lawsuit first brought in the 1980s. The settlement established a policy that the federal government would release unaccompanied minors from custody to their parents, relatives, or other caretakers after no more than 20 days, or, alternatively, determine the “least restrictive” setting for the child.

In a separate development, in 2008 the Democrat-controlled Congress approved bipartisan legislation to combat human trafficking and President George W. Bush, a Republican, signed it into law.

Section 235 (g) of that law, known as the William Wilberforce Trafficking Victims Protection Reauthorization Act, states that unaccompanied minors entering the United States must be transferred to the custody of the Department of Health and Human Services’ Office of Refugee Resettlement, rather than to the Department of Homeland Security.

The U.S. Court of Appeals for the 9th Circuit expanded the Flores settlement in 2016 to include children brought to the country illegally by their parents. For consistency between the provision of the anti-trafficking law and the 9th Circuit’s interpretation of the Flores agreement, children who came into the country illegally with parents had to be taken into HHS custody.

2.  His Time in Obama Administration

Morgan served as President Barack Obama’s last Border Patrol chief. At least in theory, that part of his background should bring some bipartisan support, said Art Arthur, a former federal immigration judge and general counsel for the Immigration and Naturalization Service (now known as ICE).

“It is interesting that Trump tapped Obama’s former Border Patrol chief,” Arthur, now a resident fellow for law and policy at the Center for Immigration Studies, told The Daily Signal. “It will be difficult [for Democrats] to attack his character, given he was an Obama appointee. He supports the president’s policies, has a law enforcement background, and has a bipartisan background. He checks all the boxes.”

Before Obama appointed him to run the Border Patrol in the final three months of his administration, Morgan served as the head of internal affairs at Customs and Border Protection—the agency that oversees both the Border Patrol and ICE.

Trump named Thomas Homan as acting ICE director days after taking office in January 2017, then nominated him for the job the following November. The Senate didn’t confirm Homan, however, and he served in the acting capacity until retiring in June 2018. Trump named Deputy Director Matthew Albence as the new acting ICE director.

In the interview last week, Morgan said matters have gotten worse at the border than they were at the end of 2016.

“I’ll tell you, it’s worse in many aspects. It was a challenge when I was [Border Patrol] chief in 2016,” Morgan said, explaining:

I estimated about 15% of Border Patrol agents were pulled off the line to do humanitarian mission, what I call kind of child day care services, right? … Now, fast-forward to 2019, the numbers have skyrocketed and now that 15% of Border Patrol agents being pulled off the line and some sectors, that’s 40%. So the Border Patrol [agents] every day … go to work, they know that the border is absolutely less secure than the day before. Their morale is low, they’re frustrated, they want Congress to act.

3. His Years With the FBI

Before Morgan served in the Department of Homeland Security during the Obama administration, he had a two-decade career in the FBI.

For 17 years, he was a career special agent for the FBI, according to his LinkedIn page.

Morgan previously served in the Marines for 11 years and did a brief stint with the Los Angeles Police Department. He graduated from the University of Central Missouri before earning a law degree at the University of Missouri-Kansas City.

“President Trump said he wants to get ‘tougher’ with immigration enforcement. There is no one tougher than Mark Morgan,” Mike Howell, former oversight counsel for the Department of Homeland Security, told The Daily Signal.

“His decades in federal law enforcement, deep understanding of immigration law, and gritty leadership will rejuvenate the agency so central to this administration’s agenda to faithfully execute our nation’s laws,” said Howell, now senior adviser for executive branch relations at The Heritage Foundation. “The country will be a safer place and our immigration laws more respected with Morgan at the helm. An excellent choice.”

4. He Backs a Border Wall

Morgan strongly supports the border wall as part of a larger solution, and has in recent months gained much media attention as the former Obama official who backed Trump’s call for a better barrier at the border.

“One of my catchphrases I’ve been saying is, ‘We need to do it all, including the wall,’” Morgan said in the interview with The Daily Signal. “So the American people need to understand the wall is still an integral part of securing the border. … Again, the wall is part of that multilayer strategy of infrastructure, technology, and personnel and strategic locations that … the Border Patrol needs.”

Morgan isn’t new to the problems he would be tackling, noted Arthur of the Center for Immigration Studies.

“Morgan will be a good director of ICE. He was the chief of the Border Patrol and a former FBI agent,” Arthur said. “He understands what the problems are and will carry out the president’s policies and programs.”