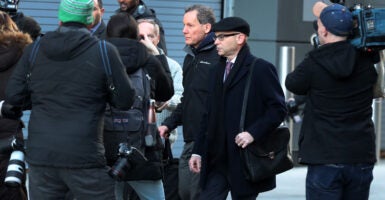 The U.S. government has voiced concerns before about China’s espionage, but the action it has taken to revoke the visas of more than 1,000 Chinese nationals followed numerous examples of the communist nation’s infiltration of higher education.

Most of those who lost their U.S. visas in August were graduate students and researchers visiting the United States.

“One-third of all foreign students are from China. Even if they don’t get discovered [for espionage], there are a significant number that do,” Ira Mehlman, media director for the Federation for American Immigration Reform, which advocates strict enforcement of immigration law, told The Daily Signal.

“The communist government pays the full tuition even if [students] are not working for the military or intelligence,” Mehlman said.

In late July, the FBI launched a probe of Chinese student visa holders suspected of having undisclosed ties to China’s military.

Some Chinese nationals are “abusing student visas to exploit American academia,” Wolf said, adding that “the actions of China may be unabating, but they are not unthwartable.”

“We are blocking visas for certain Chinese graduate students and researchers with ties to China’s military fusion strategy to prevent them from stealing and otherwise appropriating sensitive research,” he said.

In May, the State Department authorized revoking the visas of about 3,000 Chinese students in the U.S., noting national security concerns as its primary reason. The decision was narrowly related to students associated with the Chinese military, or the People’s Liberation Army.

“That’s as it should be—narrowly focused on national security concerns,” Walter Lohman, director of the Asian Studies Center at The Heritage Foundation, told The Daily Signal. “Don’t want to throw the research baby out with the bathwater. U.S.-China scientific collaboration is an important thing internationally; [it] leads to innovation at home and helps keep our universities competitive globally.”

In 1931, he said, the Soviet Union used students to infiltrate the Massachusetts Institute of Technology in Cambridge.

Here are six examples of Chinese espionage at U.S. institutions of higher learning.

In June, the FBI arrested Xin Wang, a scientific researcher and officer with China’s People’s Liberation Army, at Los Angeles International Airport as he attempted to depart the United States for Tianjin, China. They charged him with visa fraud.

Wang came to the United States in March 2019 after receiving a visa in December 2018. His visa application stated that the purpose of his visit was to conduct scientific research at the University of California, San Francisco.

Court documents say Wang admitted that a supervisor at a military university lab run by the Chinese government instructed him to observe the layout of the lab at UC San Francisco and bring back information on how to replicate it in China.

Federal prosecutors say Wang made fraudulent statements on his visa application by claiming to have served as an associate professor in medicine in the People’s Liberation Army.

When Customs and Border Protection officers interviewed Wang at the airport, prosecutors say, he provided information that he actually was a technician in the Chinese army and employed by a military university lab. CBP officials also determined that Wang was being paid by the Chinese army and the China Scholarship Council in addition to receiving compensation from UC San Francisco.

Court documents say Wang was employed by the People’s Liberation Army while studying in the United States and that he made false statements about his military service in his visa application to increase the likelihood that it would be approved.

Prosecutors allege that Wang duplicated the work of his UC San Francisco lab supervisor, which had been funded through grants from the National Institutes of Health. Prosecutors also say that Wang wiped his personal phone of WeChat text-messaging content earlier on the morning he arrived at Los Angeles International Airport.

Prosecutors charged Lieber with one count of making a materially false, fictitious, and fraudulent statement. The professor pleaded not guilty in June.

According to the Justice Department, Lieber specializes in nanoscience and the research he oversaw was financed by more than $15 million in grants from the National Institutes of Health and the Defense Department. Such grants require the disclosure of significant foreign financial conflicts of interest, including financial support from foreign governments or foreign entities.

Federal prosecutors say Harvard wasn’t aware that beginning in 2011, Lieber became a “strategic scientist” at Wuhan University of Technology in China and was a contractual participant in China’s Thousand Talents Plan from around 2012 to 2017.

The Thousand Talents Plan is designed to attract and recruit Chinese working overseas to bring their knowledge and experience back to China and reward individuals for stealing proprietary information.

The Justice Department says that under the terms of Lieber’s three-year contract, Wuhan University of Technology paid Lieber $50,000 per month, living expenses of up to 1 million Chinese yuan (about $158,000), and more than $1.5 million to establish a research lab at the Wuhan school.

The Justice Department also says that in 2018 and 2019, Lieber lied to federal investigators about his involvement in the Thousand Talents Plan and his affiliation with the Wuhan university.

In 2018, the National Institutes of Health inquired about Lieber’s association with the Thousand Talents Plan and the Wuhan university. The Justice Department says that Lieber misinformed Harvard, prompting that university to lie to NIH.

In January, federal prosecutors charged Yanqing Ye, 29, a lieutenant in the People’s Liberation Army, with one count each of visa fraud, making false statements, acting as an agent of a foreign government, and conspiracy. Ye is currently in China.

Prosecutors say Ye falsely identified herself as a student and lied about her ongoing military service at the National University of Defense Technology, a top military academy directed by the Chinese Communist Party.

While Ye was studying at Boston University’s Department of Physics, Chemistry, and Biomedical Engineering from October 2017 to April 2019, she continued to work for the Chinese military in conducting research, assessing U.S. military websites, and sending U.S. documents and information to China, the Justice Department further says.

Federal investigators interviewed Ye in April 2019 at Boston’s Logan International Airport. She falsely claimed she had minimal contact with two professors at the National University of Defense Technology who were high-ranking Chinese military officers, the Justice Department alleges.

Prosecutors say a search of her electronic devices demonstrated that at the direction of one professor, a PLA colonel, Ye had accessed U.S. military websites, researched U.S. military projects, and compiled information for the Chinese military on two U.S. scientists with expertise in robotics and computer science.

The Justice Department also says a review of a WeChat conversation revealed that Ye and the second Chinese military official from the National University of Defense Technology were collaborating on a research paper about a risk assessment model designed to decipher data for military applications.

During the interview, Ye admitted that she held the rank of lieutenant in the PLA and was a member of the Chinese Communist Party.

In January, federal prosecutors charged Zaosong Zheng, 30, a Chinese national, with attempting to smuggle 21 vials of biological research to China.

Although Zheng didn’t work for a university, he was a researcher at Beth Israel Deaconess Medical Center in Boston.

Prosecutors allege that Zheng, who had arrived in the U.S. in September 2018, stole 21 vials of biological research and attempted to smuggle them out of the country aboard a flight to China.

Federal agents who arrested Zheng at Logan Airport found the vials in socks inside one of his bags, the Justice Department says.

The Justice Department alleges that Zheng lied to agents about the contents of his luggage, but later admitted he had stolen the vials from a lab at Beth Israel. Prosecutors say Zheng admitted that he intended to take the vials to China and use them to conduct research in his own laboratory, then publish the results under his own name.

In May, the Justice Department charged Simon Ang, an electrical engineering professor at the University of Arkansas, with wire fraud after he allegedly accepted funds improperly from the Chinese government.

The University of Arkansas fired Ang in in September, saying he misappropriated the university’s intellectual property for his own benefit.

Like the Harvard professor, Ang was involved in China’s Thousand Talents program. Prosecutors charged him with keeping the arrangement secret from the university and from the federal government, which allowed his research projects to get grant money from NASA and other federal agencies.

Ang reportedly obtained more than $5 million in grants from the U.S. government over the past seven years, but never told the University of Arkansas that he did work for Chinese universities and electronics technology companies, in violation of school policy.

Xiao-Jiang Li, a former professor at Emory University in Atlanta, pleaded guilty in May to a felony charge of filing a false tax return that omitted about $500,000 that he received from China’s Thousand Talents program.

Li was sentenced to a year of probation and ordered to pay $35,089 in restitution.

Li joined the Thousand Talents program in late 2011 when he taught at Emory, according to the Justice Department. The Chinese paid him at least $500,000 that prosecutors say he kept hidden while studying Huntington’s disease.

He worked at the Chinese Academy of Sciences in Beijing and at Jinan University in Guangzhou conducting research similar to what he was doing at Emory, the Justice Department says.