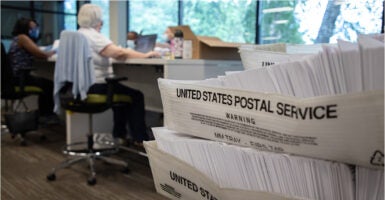 The 4th U.S. Circuit Court of Appeals ruled in favor of the North Carolina State Board of Elections on Tuesday, allowing it to count absentee ballots that arrive before Nov. 12 as long as they were postmarked by Nov. 3.

“All ballots must still be mailed on or before Election Day,” said Circuit Judge James Wynn in the court’s 12-3 ruling. “The change is simply an extension from three to nine days after Election Day for a timely ballot to be received and counted. That is all.”

The Trump campaign and the state Republican Party had sued over the extension, saying that it violated North Carolina’s election code.

The court’s ruling upheld an earlier decision by U.S. District Judge William Osteen, who said that changing the state’s rules only weeks before the election could result in “judicially created confusion.”

His decision prompted an appeal from the Trump campaign, who argued that the decision was a “wholesale alteration” of North Carolina’s election laws, Reuters reported.

The decision was lauded as a victory by Democrats in the state. North Carolina was the first state in the country to mail ballots to voters who had requested them, and over 2 million ballots have been cast so far, over 40% of which have been from registered Democratic voters.

North Carolina is also the only state in the country to feature competitive races at the presidential, senatorial, and gubernatorial levels.