How the Michigan Supreme Court Whacked Whitmer for COVID-19 Overreach 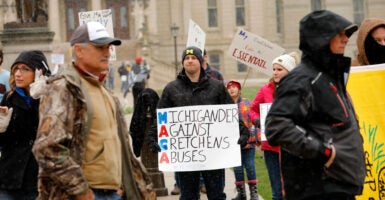 In two cases that were fast-tracked to the Michigan Supreme Court, justices ruled against Gov. Gretchen Whitmer's overuse of executive orders on COVID-19 restrictions. Pictured: Michiganders protest against excessive quarantining amid the coronavirus pandemic at the Michigan state Capitol in Lansing, Michigan, on April 15. (Photo: Jeff Kowalsky /Agence France-Presse/Getty Images)

During the past several months, COVID-19 policies have stretched the limitations in the constitutions of Michigan and other states, as well as those of the U.S. Constitution.

In two cases that were fast-tracked to the state’s highest court, the Michigan Supreme Court ruled against Gov. Gretchen Whitmer.

Whitmer and several other governors across the country have used executive orders extensively, instead of working with their legislatures or county health departments on solutions.

That distorts the separation of powers in our constitutions, both state and federal. The orders have devastated innumerable businesses by keeping them closed longer than necessary.

Here in Michigan, Whitmer, a Democrat, has issued 192 executive orders, many of which were struck down recently by the state Supreme Court.

The governor got spanked unanimously by the court for flouting a 1976 law, the Emergency Management Act. She extended the state of emergency without the Legislature’s permission. Lawmakers must renew their consent every 28 days. They did that once, through April 30. Whitmer has been in violation of the law ever since.

The court’s unanimous ruling was not widely reported. It went unmentioned by the governor as she criticized the “narrow majority of Republican justices” in a second ruling, which, by a 4-3 decision, struck down as unconstitutional a 1945 law that gave governors expansive authority without a time limit.

A recent Heritage Foundation analysis of the ruling described some of the orders the governor made under the emergency management laws.

The court ruled that Whitmer unlawfully used her power to “reorder social life and to limit, if not altogether displace, the livelihoods of residents across the state and throughout wide-ranging industries.”

Instead of being chastened by the judicial branch or embarrassed by her unconstitutional actions since May 1, Whitmer doubled down:

Today’s Supreme Court ruling, handed down by a narrow majority of Republican justices, is deeply disappointing, and I vehemently disagree with the court’s interpretation of the Michigan Constitution.

Then she vowed to accomplish her purposes by other means. Some existing regulations by the Michigan Department of Health and Human Services could be legally expanded. County health departments have also stepped in with mask-wearing and other regulations.

Those are appropriate and lawful means, unlike the governor’s use of a perpetual state of emergency to shutter businesses without the Legislature’s approval.

The judiciary’s job, beyond ruling on civil or criminal cases, is to rein in rogue legislatures and other lawbreakers.

Despite the COVID-19 virus making collecting signatures more difficult, Unlock Michigan, a coalition of residents concerned about Whitmer’s lockdown orders, turned in 500,000 signatures on Oct. 2 for its ballot proposal to repeal the 1945 law. The Supreme Court ruling rendered the ballot proposal moot.

The spin from Democrats, echoed by many in the news media, has been that we need to maintain mask-wearing indoors and social distancing everywhere. However, most people don’t have a problem with that.

How will all this affect the Nov. 3 elections in this battleground state? Whitmer is not on the ballot for another two years, but her policies are. Conservatives are more fired up than liberals about all this, so it will be interesting to see what effect it will have.

In this major battleground state, former Gov. John Engler, a Republican, was dubbed “King John” by his critics for what they viewed as his heavy-handed leadership. Whitmer has been labeled “Queen Gretchen” and worse.

Government works best with a diversity of opinions working toward the same goal; in this case, safety from a deadly virus, but without crippling businesses, and without the collateral damage of clinical depression and even suicides. (A June survey by the federal Centers for Disease Control and Prevention reported 31% of Americans had anxiety or depression symptoms and 11% had seriously considered suicide.)

Of the coronavirus crisis, state Senate Majority Leader Mike Shirkey, a Republican, said it well: “Now is the time for bipartisan action to transition from government operating in fear of the virus to government managing life in the presence of the virus.”

Other states would do well to follow Shirkey’s advice.