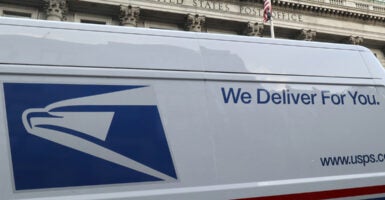 Authorities said they retrieved over 1,800 pieces of mail, including 99 ballots, from dumpsters in New Jersey. Pictured: A Postal Service truck is parked outside a post office in Jersey City, New Jersey, on Aug. 17. (Photo: Gary Hershorn/Getty Images)

Over 1,800 pieces of mail were retrieved from dumpsters, 99 of which were ballots, according to CBS. Federal prosecutors told the network that the postal worker, identified as Nicholas Beauchene, 26, was scheduled to deliver mail in parts of Orange and West Orange, New Jersey.

Nearly 300 campaign flyers promoting candidates for the West Orange Council and the township’s school board also were recovered from local dumpsters, CBS reported.

Beauchene faces up to five years in prison and a fine of $250,000, FOX29 Philadelphia reported.

News of the incident comes amid ongoing concerns regarding mail-in ballots and voter registration forms in several states.

Bernadette Breslin is a contributor to The Daily Caller News Foundation.