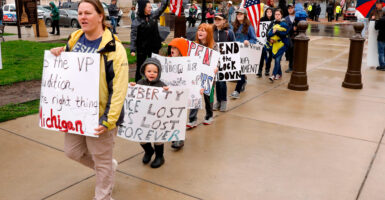 Michigan Gov. Gretchen Whitmer got slapped down by the Michigan Supreme Court on Oct. 2 for her unconstitutional assertions of executive power under the guise of protecting Michiganders from COVID-19.

Whitmer, a Democrat, is one of several governors who have grossly overstepped their authority by issuing sweeping, draconian lockdown orders across their states.

The opinion of the Michigan Supreme Court follows on the heels of a similar opinion striking down the outrageous orders and secretive process of Pennsylvania’s Democratic governor, Tom Wolf.

As one of us wrote back in March in The Wall Street Journal, federal and state governments have extraordinary emergency powers to deal with the COVID-19 pandemic. But those powers have limits.

In Michigan, state law sets legislative and temporal limits, both of which Whitmer blithely ignored.

Before we get to the ruling, it’s important to chronicle the various executive orders issued by Whitmer, what they covered, how long they lasted, and the authority under which they were promulgated. Once you understand that, it’s easy to see why the Michigan Supreme Court ruled as it did.

On March 10, Whitmer issued her first order, Executive Order (EO) 2020-04, declaring a “state of emergency” pursuant to two state statutes, the Emergency Management Act of 1976 and the Emergency Powers of the Governor Act of 1945.

Ten days later, she issued her second order, EO 2020-17, prohibiting medical providers from performing nonessential services. Three days after that, she issued her third, EO 2020-21, ordering all residents to stay at home with limited exceptions.

In accordance with state law, she asked the Michigan state legislature to extend the declarations, which they did, but only until April 30.

On that day, she issued EO 2020-66, terminating the declaration of a “state of emergency” and a “state of disaster” under the Emergency Management Act. That was in accordance with state law, which requires that, after 28 days, the governor is required to either (1) issue an executive order declaring the disaster terminated, or (2) request both houses of the legislature to approve a resolution extending the state of disaster for a “specific number of days.”

That was all good under state law, but then Whitmer went off the rails.

Not surprisingly, health care providers who were affected by Whitmer’s executive orders sued in federal district court, which, in turn, certified two questions to the Michigan Supreme Court: (1) whether, under the Emergency Management Act  or the Emergency Powers of the Governor Act, the governor had the authority after April 30 to issue or renew any executive orders related to the COVID-19 pandemic, and (2) whether the Emergency Powers of the Governor Act  and/or the Emergency Management Act violate separation of powers and/or the nondelegation clauses of the Michigan Constitution.

The Michigan Supreme Court made short work of the answer to the first certified question: No.

Since the legislature did not approve an extension of the states of emergency and disaster declarations after April 30, Whitmer was required to issue an executive order declaring those powers terminated.

The court wrote that the legislature clearly did not intend to allow “the Governor to redeclare under the EMA the identical state of emergency and state of disaster … . [S]uch a redeclaration would effectively render the 28-day limitation a nullity.”

The 28-day limitation in the Emergency Management Act was “nothing more than a durational limitation on the Governor’s authority.”

To the majority, this was a simple matter of standard statutory construction. To us, it was a matter of whether you could read English. The statute was easy to understand.

Under the Michigan Constitution of 1963, Article 3, Section 2: the powers of the government are “divided into three branches: legislative, executive, and judicial.”

No person exercising powers of one branch shall exercise powers properly belonging to another branch except as expressly provided in this constitution.

The legislative power is vested in a Senate and House of Representatives.

In analyzing whether the Emergency Powers of the Governor Act amounted to an unconstitutional delegation of legislative authority to the executive branch, the court focused on the subject matter of the emergency powers conferred by the act, the breadth of those powers, and the duration of those powers.

With respect to the subject matter and breadth, the court found that the delegation was “remarkably broad, authorizing the Governor to enter orders ‘to protect life and property or to bring the emergency situation within the affected area under control.’”

The court surveyed all the orders Whitmer issued and found them “sweeping in scope, both with regard to the subjects covered and the power exercised.”

The court concluded that Whitmer asserted power to “reorder social life and to limit, if not altogether displace, the livelihoods of residents across the state and throughout wide-ranging industries.”

With respect to the duration of the delegation, the statute authorized those powers until a “declaration by the governor that the emergency no longer exists.”

Unlike the 28-day cap under the Emergency Management Act, there are no temporal limits to the Emergency Powers of the Governor Act.

“The fact that the EPGA authorizes indefinite exercise of emergency powers for perhaps months—or even years—considerably broadens the scope of authority conferred by the statute,” warned the court.

The court concluded that the Emergency Powers of the Governor Act constituted “an unlawful delegation of legislative power to the executive and is therefore unconstitutional.”

The court issued its opinion on Oct. 2. You would think that the governor would stand down, be reasonable, and exercise the prudence and delineated authorities she does have going forward to serve Michiganders.

Instead, she has been lambasting the decision as the product of “Republican judges” and has already asserted other supposed powers she claims to have.

Lord Acton knew what he was talking about when he wrote a letter to Bishop Creighton in 1887, saying, “Power tends to corrupt, and absolute power corrupts absolutely.”

Expect more lawsuits in Michigan and other states in the near future.