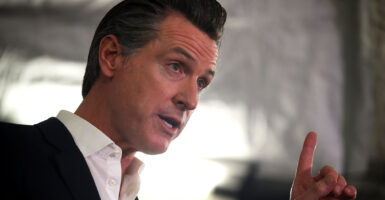 When California's one-party government cannot find solutions to current existential crises, it turns to divisive issues that have little to do with the safety and well-being of its 40 million citizens. Pictured: California Gov. Gavin Newsom speaks during a news conference about the state's efforts on the homelessness crisis in Oakland, California, Jan 16. (Photo: Justin Sullivan/Getty Images)

Apparently, when California’s one-party government cannot find solutions to current existential crises, it turns to divisive issues that have little to do with the safety and well-being of its 40 million citizens.

California has the highest gas taxes in the nation, even as its ossified state highways remain clogged and dangerous. Why, then, does Sacramento keep pouring billions of dollars into the now-calcified high-speed rail project?

When fires raged, killed dozens, polluted the air for months, consumed thousands of structures, and scorched 4 million acres of forest, in response the governor thundered about global warming. But Newsom was mostly mute about state and federal green polices that discouraged the removal of millions of dead and drought-stricken trees, which provided the kindling for the infernos.

When gasoline, sales, and income taxes rose, and yet state schools became even worse, infrastructure remained decrepit and deficits grew, California demanded that federal COVID-19 money bail out its own financial mismanagement.

In a time of pandemic, mass quarantine, self-induced recession, riot, arson, and looting, the California way is to borrow money to spend on something that will not address why residents can’t find a job, can’t rely on their power grid, can’t drive safely, can’t breathe the air, can’t ensure a high-quality education for their children, and can’t walk the streets of the state’s major cities without fear of being assaulted or stepping in excrement.

So it is a poor time to discuss reparations, even if there were good reasons to borrow to pay out such compensation. But in fact there are none.

One, California was admitted to the Union in 1850 as a free state. Its moral insistence 170 years ago that slavery be outlawed precipitated a crisis—and almost sparked the Civil War 10 years before it actually began. Despite the efforts of some slave-owning arrivals into California, there was never legal slavery in the state.

Two, about 27% of California residents were not born in the United States. Most of the naturalized citizens and undocumented immigrants arrived in the state after the Civil Rights Act was passed in 1964.

How, then, do California residents from Asia, Latin America, or Europe owe reparations to the current 6.5% of the state’s population that is African American?

Are we to establish a precedent that those who never owned slaves in a society that has no memory of slavery are to redistribute billions of their dollars to those whose grandparents were never slaves?

Three, in a multiethnic, multiracial California—where those identifying as white are a minority, and those of mixed ancestries number in the millions–how does the state adjudicate who owes what to whom?

Is an arriving Mexican immigrant a victim of institutionalized racism in Mexico, or was he part of a Mexican establishment notorious for its racism? In a multiracial state, will we adopt ancient “one drop” Confederate race laws to determine whose DNA qualifies someone for state money?

Should the state pay reparations to the descendants of Jews who fled the Holocaust, of Cambodians who fled Pol Pot’s reign of death, of Armenians who escaped Ottoman barbarity, or of Irish and Chinese who were worked to death on the Transcontinental Railroad?

Four, how will borrowing money to pay some 2 million to 3 million of the state’s 40 million residents make things easier for the African American population? And are multimillionaire state residents such as LeBron James, Oprah Winfrey, Kayne West, Jay-Z, and Beyonce eligible?

Did it mean nothing that trillions of dollars have been spent over the last half-century on anti-poverty programs, state entitlements, and diversity and inclusion programs?

If per-capita economic parity for the black population is truly the state’s concern, then why not allow more charter schools in California’s inner cities? Or deregulate the state’s cumbersome bureaucracy to ensure small businesses more opportunity and less resistance to building low-income housing?

It is said that California fails because its wealthy elites virtue-signal their caring to square the circle of their own impotence to solve the problems in their midst. Californians who live in gated homes often damn walls on the border. Those who depend on imported water damn water transference for agriculture. Those who put their children in private academies damn public charter schools. And those who raise taxes on the middle class have tax experts to find ways of avoiding taxes.

In that context, Assembly Bill 3121 can be understood—as a loud virtue signal to make up for failed responses to concrete crises.