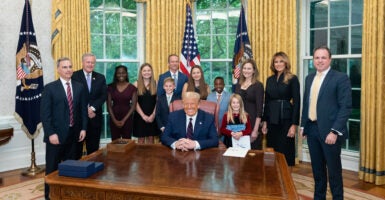 President Donald Trump and first lady Melania Trump pose with Supreme Court nominee Judge Amy Coney Barrett (third from right), along with her husband, Jesse (rear center), and their seven children on Sept. 26 in the Oval Office of the White House. Two of the children, Vivian and John Peter, were adopted from Haiti. (Photo: Andrea Hanks/White House Flickr)

Just when you thought you’d seen the bottom of the political sewer as it relates to opposing Supreme Court nominee Judge Amy Coney Barrett, along come some despicable, racist tweets by two college professors.

Their repulsive comments are, sadly, par for the course for some on the far left who oppose transracial adoption.

On the day Barrett was nominated to the Supreme Court, professor Ibram X. Kendi tweeted that Barrett and her husband are “white colonizers” for adopting two black orphans from Haiti, and that they were trying to “civilize” the children, who they supposedly think are “savages,” in the “superior ways of White people, while using them as props.”

Barrett and husband Jesse, according to Kendi, did that “while cutting the biological parents of these children out of the picture of humanity.”

When some on Twitter pushed back, Kendi said that he is “challenging the idea that White parents of kids of color are inherently ‘not racist.’” In other words, Kendi is saying that just because the Barretts adopted two orphans from Haiti, that doesn’t prove they aren’t racists.

Kendi is, ironically, the founder and director of the Center for Antiracist Research at Boston University. He is the Andrew W. Mellon professor in the humanities at the university, an author, and a fellow at Harvard, where he’s working on a book to be called “Bones of Inequity: A Narrative History of Racist Policies in America.” He also contributes to The Atlantic and is a contributor to CBS News.

Kendi has received some criticism for his racist tweet, most notably on Twitter and in a Newsweek piece. But the silence from Boston University, Harvard, CBS, and The Atlantic is deafening—and telling.

Imagine if a white conservative professor had tweeted similar bile about a black Supreme Court nominee who had adopted a white child.

Then there’s the similarly vile tweet by Ruth Ben-Ghiat, a New York University professor of Italian and history. According to her NYU webpage, she is an expert on “fascism, authoritarianism, war, propaganda, and Donald Trump.” Oh.

She praises Kendi’s tweet, and adds: “Many authoritarians seized children of color for adoption by White Christians,” she tweeted. “Pinochet’s regime did this with indigenous kids and Nazis took Aryan looking Poles for German families. Trump takes migrant kids for adoption by Evangelicals.”

These two professors ignore the fact that millions of children across the globe are orphans, and that parents around the world have opened up their homes to them. Those parents—black, brown, and white—do so because they care deeply about the needs of others, to build or add to their families, and out of love.

Sadly, Kendi and Ben-Ghiat are not alone in their warped views about transracial adoption.

As Jason Riley noted Sept. 29 in The Wall Street Journal, the National Association of Black Social Workers has been opposed to transracial adoption since 1972. It established a written position statement on the subject, linked here, and takes “a vehement stand against the placements of black children in white homes for any reason.”

According to the association, “black children in white homes are cut off from the healthy development of themselves as Black people, which development is the normal expectation and only true humanistic goal.”

Its position statement includes highly disturbing assertions, including: white parents of black children “seek out special help with their parenting”; a white mother will “panic” as she ponders who her black son will date; white parents need “special programming in learning how to handle black children’s hair”; and white parents have to “prepare their neighbors for their forthcoming Black child.”

Perhaps the group’s position, taken 38 years ago, was understandable then, but this is 2020. Yet, it hasn’t changed its position on transracial adoption to account for the changing nature of the American family, or recent social science research on the subject, which shows how out of the mainstream it is.

Furthermore, the National Association of Black Social Workers’ position discourages white parents from adopting orphans and children in need of a stable home when those babies are black.

Riley, who is himself black, also points out that social science research on interracial adoption supports the practice, and reveals no evidence of harm to black children.

He cites the 2018 book “Saving International Adoption,” by economists Mark Montgomery and Irene Powell, in which they analyzed the literature on interracial adoption and found that, when comparing black adoptees in white families with those in black families, “there is no statistical difference between the groups in terms of self-esteem, self-concept, and family integration.”

The Barretts adopted their son John Peter from a Haitian orphanage after the devastating earthquakes on the Caribbean island nation in 2010.  He was 3 years old when he was adopted. That natural disaster killed almost 250,000 people and displaced more than 1.5 million Haitians.

Earlier, the Barretts adopted their daughter Vivian from a Haitian orphanage where she was 14 months old. At the time, she was so malnourished that she wore size 0 clothes and couldn’t pull herself up or even make vocal sounds.

Haiti is one of the poorest countries on the earth. Forty-six percent of its population is malnourished, and citizens there have a life expectancy of just 63 years, so it’s not surprising that many children are available for adoption.

Does anyone really think John Peter and Vivian would have been better off growing up (if they survived) in Haiti, rather than in the Barretts’ home in South Bend, Indiana?

Today, John Peter and Vivian are thriving in a loving, large family.

So, before anyone else decides to stir the “white colonizer” pot in the run-up to Barrett’s Supreme Court confirmation hearing, they might want to learn a bit about international adoptions, and adoptions from Haiti in particular.

Armed with that knowledge, they will see how cumbersome the process is, why it’s lengthy, and the protections built into the system to protect the rights of the child.

The United States is a party to the Hague Adoption Convention, an international treaty that provides important safeguards to “protect the best interests of children, birth parents, and adoptive parents who are involved in intercountry adoptions.”

That convention entered into force in the United States in 2008, but even before that, there were international rules in force and in each country where the orphan lives, which protect the rights of the child.

The preamble to the Hague Adoption Convention reads:

Every child benefits from a loving home in deeply profound ways. Intercountry adoption has made this permanently possible for hundreds of thousands of children worldwide.

When children cannot remain with a relative, and new parents within their communities cannot be found, intercountry adoption opens another pathway to children to receive the care, security, and love that a permanent family can provide.

Since Haiti is also a party to the Hague Adoption Convention, adoption requirements of both countries have to be followed. Americans who want to adopt internationally have a mountain of paperwork and process to endure, even before the adoption agency they contract with works with the host country to get them on a waiting list, which often takes years.

To adopt internationally, Americans must be at least 25 years old. If you’re married, you must jointly adopt the child. You must undergo a criminal background check; go through an exhaustive home study conducted by a licensed provider; provide your financial data and credit history; and undergo other scrutiny.

Furthermore, prospective parents must meet eligibility and suitability requirements as determined by U.S. Citizenship and Immigration Services. Once the prospective parents are in country, and the eligible child is identified for adoption, they are all required to be interviewed by the U.S. consulate in the host country.

Haitian law requires prospective adoptive parents to obtain a full and final adoption decree under Haitian law before the child can emigrate to the United States.

Haitian law requires that prospective parents prove that they are employed and financially stable. It also requires them to travel to Haiti before the adoption is finalized, and that for married couples (which can include same-sex couples), at least one member be at least 30 years old.

For a Haitian child to be eligible for adoption, the biological parents must have relinquished the child, be deceased, or be unknown. Then, and only then, can the state make the child available for international adoption.

Our children, like those of the Barretts, had unique medical and psychological needs. But we, like so many other people, persevered because we believe that orphans—of any color—need a loving, stable home.

Sadly, as Riley pointed out, there are “more black children in need of adoption, here and abroad, than there are black families who have expressed a willingness to take them.”

Liberals who oppose adoption in general, and interracial adoption in particular, are in the extreme minority, and their views, especially in 2020, are backwards and repulsive.

The Barretts should be applauded for adopting a sickly, malnourished orphan girl and an orphaned boy from Haiti.

They, like so many other adoptive parents, did so out of pure love and gave those children a better life than the ones they would have suffered in their birth country.