Corruption and Violence Are Crippling Haiti 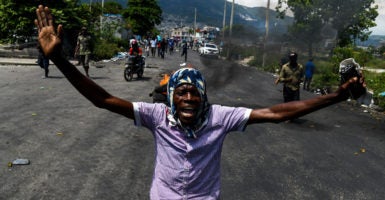 A demonstrator partakes in a protest march against the ruling government in Port-au-Prince on June 13, 2019. (Photo: Chandan Khanna/AFP/Getty Images)

Grant Steele is a member of the Young Leaders Program at The Heritage Foundation.

Haiti is trapped in yet another cycle of violence.

Blocked roads create difficulties for the distribution of food, water, medicines, and utilities, causing an already-impoverished people even more hardship.

This latest round of protests began after a report by Haiti’s senate that alleges that, among other high-level government officials and private-sector elites, President Jovenel Moïse and his predecessor, Michel Martelly, have embezzled as much as $2 billion of funds from Venezuela’s now-defunct “PetroCaribe” program.

Those funds were intended to assist the poor of Haiti by improving infrastructure, health, and education services.

The movement against Moïse is growing. Several political parties, civic and grassroots organizations, and leading business figures have expressed their discontent for the sitting president.

Some observers predict that Moïse will be forced from office before his term expires. Opposition forces have promised that protests will continue at a national level until Moïse resigns.

His advisers and spokesman defiantly assert that Moïse will not resign and deflect allegations and blame for Moïse’s involvement in the scandal.

Moïse denies any involvement and recently made a statement attempting to exonerate himself. He is calling for all those involved to be held accountable, an investigation to take place, and for justice to be upheld.

Given the credibility of the accusations, though, it is no surprise that Moïse’s popularity is low and steadily dropping.

Adding to the political instability, the Haitian parliament failed yet again to ratify a government and a new prime minister after ousting Jean-Henry Céant from the job in March. Ultimately, frustrated opposition leaders ransacked the parliamentary building, giving new meaning to the term “floor fight.”

Thus, Haiti has become more ungovernable with each passing day.

The International Monetary Fund has suspended a $229 million loan because Haiti does not have a functioning government in place to receive the funds, and a lack of hard currency reserves has caused a massive energy shortage that has left many without a steady source of electricity or access to gasoline.

Inflation has spiked, too, putting basic goods and food out of the reach of many.

The State Department recently reduced its travel warning for Haiti to the second-highest level, after keeping it at the highest level (“Do Not Travel”) for most of the first six months of 2019. Many other countries also have issued travel warnings.

As a result, airline companies have decreased flights to the island nation, which makes it harder for missionary and humanitarian organizations from the U.S. and elsewhere to send volunteers and supplies, which threatens a vital lifeline and creates a void in schools, clinics, community centers, and other important institutions that help keep Haiti afloat.

The Heritage Foundation’s Index of Economic Freedom outlines the steps the Haitian government must take to restore stability and create the conditions for improved economic freedom and growth.

No. 1 on that list of recommendations is to combat internal corruption and enforce the rule of law vigilantly.

These and other reforms are vital if the Haitian people are to avoid further suffering.