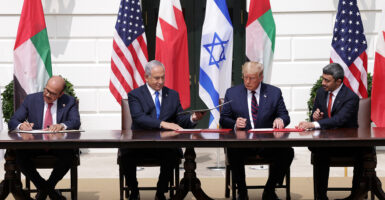 This week, I had the great honor and privilege of observing history. I was blessed to be a guest of the White House and witness the signing of the momentous peace agreement between Israel and two Arab nations: Bahrain and the United Arab Emirates.

Watching as President Donald Trump hosted Israeli Prime Minister Benjamin Netanyahu and the Emirati and Bahraini foreign ministers, I felt a swelling of joy in my heart. This was the dawning of a new day.

Seeing these enhanced and improved ties between Israel and the Arab world is both encouraging and exciting. For those who love Israel and want to see peace in the Middle East, this is the next leap forward. Israel is rapidly expanding ties and cooperation with its neighbors, and this is genuinely an extraordinary development.

The fruits of these deals will be many. We will see increased economic cooperation in the region as these countries collaborate on medical innovation, agricultural technologies, and so much more.

It will become evident that this normalization serves only to lift each society and provide gifts for the entire world. With eager partners in the region, Israel’s technology and innovation will benefit the whole Middle East. Make no mistake; these two agreements are game-changers.

This moment is hugely significant on the world stage. And it also highlights the critical importance that people play in making policy happen. Most people don’t know that a chance encounter in a Washington, D.C., restaurant in March played an instrumental role in getting these historic agreements over the finish line.

At this casual meeting, Israel’s idea of establishing full and warm diplomatic relations with an Arab country (outside of Egypt and Jordan) shifted from being an unthinkable development to a project secretly in the works.

Netanyahu was in Washington for meetings with Trump, dining one night in a Georgetown restaurant. Present in the same place was UAE Ambassador to the U.S. Yousef Al Otaiba.

When the two men learned that they were dining in the same establishment, they had a brief encounter where they shook hands, exchanged pleasantries, and spoke for a while. This friendly chat would be one of the deciding factors in a deal that will reshape the Middle East dynamics.

Netanyahu invited Al Otaiba to visit Israel, which is significant in and of itself. The ambassador declined.

But it was not because he did not want to visit the Jewish state. To his immense credit, Al Otaiba thought not just about the value of him taking a trip to Israel, but about his country.

He proposed bringing his entire country to the Jewish state, imagining that it could be a first step toward normalizing relations and creating real peace ties. Genuine ties, which start at the human level, person-to-person, and expand to include entire societies.

Without question, this never would have been possible without some key individuals working tirelessly behind the White House scenes.

Jared Kushner played an essential role and was a driving force, bringing a fresh and innovative approach to establishing peace in the region. His boundless energy and creativity, applied to these thorny geopolitical issues, have proven to be invaluable.

And at the end of the day, there is only one person in charge, one person to whom we can credit this deal that so many doubters thought would never come. That person is Donald Trump. Without his global leadership and his unwavering commitment to pursuing peace in the Middle East, this historic breakthrough would not have been achieved.

The fact that Trump was able to convene Israel, Bahrain, and the UAE at the White House for the signing ceremony is truly a fantastic thing, not to be taken for granted.

This achievement is a real testament to the Trump administration’s commitment to pursuing peace and being the most generous friend—not just to Israel but also to the people of the Middle East—that there has ever been in the White House.

As Israel, Bahrain, and the UAE embark upon their new journey together, I have full faith that this will only be the beginning. And I look forward to attending other peace ceremonies in the near future that include Saudi Arabia and Oman.