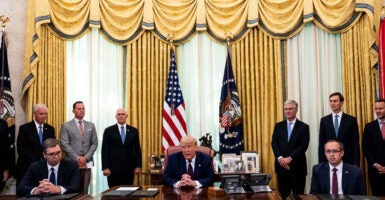 After years of sharp disagreements and failed negotiations, the Sept. 4 agreements—achieved under the auspices of the United States—aim to enable a more free and efficient flow of people and goods across the border between Serbia and Kosovo, and promise a more forward-looking and constructive relationship between the two nations in the future.

Richard Grenell, the Trump administration’s special envoy for Serbia and Kosovo, underscored the importance of the accord:

Ever since 2017, the U.S. position on the Serbia-Kosovo conflict has been that steps toward economic normalization will dilute the power and importance of the dispute’s hot-button political matters.

His belief from the start has been that trust is built first in the process of creating opportunities and futures for young people, rather than in the settlement of scores, symbolism, or the righting of historical wrongs.

Grenell also made it clear: “The U.S. will spend the next year implementing these new agreements, and the people and governments of Kosovo and Serbia have the full trust of the U.S. government to carry them forward.”

Kosovo is a small country in the western Balkans with a history rooted in complex relations between its ethnic and religious groups. Following the wars of the 1990s, Kosovo was placed under U.N. administration in June 1999.

On Feb. 17, 2008, Kosovo declared its independence from Serbia and has been recognized by 114 countries, including the United States and all of Kosovo’s neighbors in the Balkans except Serbia, as an independent, sovereign nation.

Currently, the U.S. maintains 660 troops in Kosovo as the largest contingent in NATO’s Kosovo Force, a peacekeeping force the alliance maintains in the region. From Washington’s foreign policy perspective, creating and preserving a more secure and prosperous Balkans is clearly in America’s interest.

Even so, Washington cannot provide Kosovo and Serbia—“moderately free” economies, according to The Heritage Foundation’s annual Index of Economic Freedom—with the lasting political will that they need to transform their economies according to free-market principles.

Both countries need significant additional reforms to economic policies still too reminiscent of their socialist pasts. The U.S. can help by engaging at the technical and practical level in ways that enable Kosovo and Serbia to advance their economic modernization and attract greater private sector investment.

The historic agreements between Kosovo and Serbia to take practical steps toward economic normalization usher in a welcome new chapter for America and the Balkan region.

The advancement of economic freedom, opportunity, and prosperity for both Kosovars and Serbs is a worthy and achievable goal for America’s strategic engagement in the region.