Virginia Republicans Sign ‘Police Pledge’ to Back the Blue 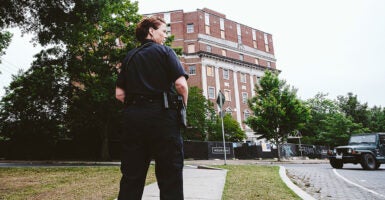 The Republican Party of Virginia has signed onto a "Police Pledge" committed to opposing the defunding of law enforcement. Pictured: A police officer patrols after a report of a gunman June 20 on a building overlooking a park in Richmond, Virginia, where demonstrators protested a statue of Confederate Gen. Robert E. Lee,. (Photo: Eze Amos/Getty Images)

The Virginia Republican Party is vowing to stand in support of law enforcement.

“We have seen countless attacks on our brave law enforcement officers, citizens, and neighborhoods,” Rich Anderson, chairman of the Republican Party of Virginia, said Thursday, announcing the state GOP’s commitment to supporting law enforcement on its website.

“It is critical to our national fabric that every Virginian and every American support the selfless men and women who serve as sworn and badged law enforcement personnel, provide for our public safety, serve our citizens, and ensure that families live in orderly and peaceful communities,” Anderson said Friday in a statement emailed to The Daily Signal.

He said his party has signed a pledge spearheaded by Heritage Action for America’s “Fight for America” campaign, which is designed to advocate American values, oppose the extremism of the far left, and support both law enforcement and accountability in the education system.

Heritage Action for America is a grassroots partner organization of The Heritage Foundation.

The Virginia GOP’s pledge came on the heels of Wednesday’s passage by the  Democrat-controlled Virginia Senate, on a 21-15 party-line vote, of a bill making an assault on a police officer a misdemeanor rather than a felony if the officer is not hurt in the attack.

The bill also does away with a mandatory minimum six-month jail sentence for assaulting a police officer.

“It is time to join together at all levels to stand for safety and security, and show our support for law enforcement,” Anderson said.

The statement from the Republican Party of Virginia notes that Anderson’s announcement follows those of “over 27,000 citizens plus Governors, Senators, Congressmen, and State Officials, and candidates to show support for law enforcement.” The tally of citizens’ signatures has risen to more than 29,000.

“Join me today and stand up for law and order by adding your name to the Police Pledge: https://heritageaction.com/policepledge/,” Anderson wrote on the website.

Heritage Action kicked off the “Fight for America” campaign Aug. 13 with Vice President Mike Pence at a town hall-style event in Urbandale, Iowa.

Heritage Action Executive Director Jessica Anderson—no relation to the Virginia Republican leader—served as moderator for the town hall. In his remarks, Pence said that cities around the country have seen an increase in violence amid calls on the left for defunding law enforcement.

In a statement provided to The Daily Signal, Heritage’s Anderson said the Virginia Senate’s vote to make an assault on a police officer a misdemeanor is not the way to peace.

“While violence is on the rise in cities nationwide, the Virginia Legislature is making it harder to prosecute assaults on law enforcement,” Anderson said, adding:

This sends a message that violence against the police is acceptable. It’s absolutely not. By lowering the penalty for assaults, the Legislature is not only putting police officers in harm’s way, but they’re endangering judges, emergency medical services, and others who work to provide safety, security, and the rule of law to the families of Virginia.

That’s why it’s so important for more leaders and citizens to show support for our law enforcement.

She called the Virginia GOP’s action “the kind of leadership we need.”