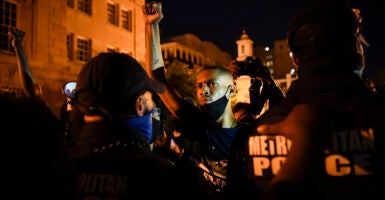 Police hold back protesters at a demonstration outside the White House on Thursday night near Black Lives Matter Plaza during the Republican National Convention. (Photo: Caroline Brehman/CQ-Roll Call/Getty Images)

Protesters in the nation’s capital—one of the largest recipients of federal aid—became a rowdy mob Thursday night outside the White House after the conclusion of President Donald Trump’s acceptance speech during the Republican National Convention.

Harassed guests who were present for the president’s speech credited officers of the Metropolitan Police Department with protecting them as they departed the White House.

D.C. Mayor Muriel Bowser has rejected additional federal help in law enforcement despite the unrest that swept the District in the past two months.

However, the federal government has provided the D.C. government with $3.3 billion from 2016 through 2019, or on average $4,680 per person—more than any other city, according to an audit from fiscal watchdog group Open the Books.

Bowser, whose city is once again lobbying for statehood, has not endorsed defunding the police. She got national media attention, however, when she had the words “Black Lives Matter” painted in huge yellow letters on a street that leads to the White House.

Some among hundreds of protesters surrounded and shouted at Sen. Rand Paul, R-Ky., his family members, and the police officers shielding them Thursday night as Paul and other invited guests exited the White House.

One protester charged at Paul and a police officer, as seen in a video.

Other video shows the mob heckling other guests as they exited the White House.

In another scene, protesters stood near St. John’s Church, which rioters set on fire May 31, and chanted that if they didn’t get justice they would “burn it down.”

Open the Books released an audit earlier this month looking at five cities that got a total of $14 billion in federal funding that either have moved to defund police agencies or issued some sort of  “stand down” order to police officers amid civil unrest.

In addition to the District of Columbia, the audit assesses Portland, New York, Seattle, and San Francisco.

“Those are the five cities that have been in the national news after the George Floyd protests broke out across major U.S. cities and also where mayors and police chiefs were accused of standing down their police,” Open the Books CEO Adam Andrzejewski told The Daily Signal.

“For those reasons, we chose those five cities,” Andrzejewski said. “They are also geographically representative from the two coasts.”

Open the Books did a separate audit in June that looked specifically at salaries for D.C. employees after the city government asked for a $3.15 bailout from Congress to help cover COVID-19 costs.

The audit noted that Bowser, the District’s Democratic mayor, was paid $220,000 last year and makes more than any of the 50 state governors, including California Gov. Gavin Newsom, a fellow Democrat and the highest-paid governor at $202,000 a year.

“She significantly out-earns every governor in the 50 states,” Andrzejewski said of Bowser in a phone interview with The Daily Signal.

The Daily Signal asked for comment from numerous spokespersons for D.C. departments named in the Open the Books audits. None responded by publication time.

Six other employees in the mayor’s office also out-earned every governor. The D.C. city government has a total of 8,000 employees who make more than $100,000 a year, according to Open the Books.

“Our point is they are pushing for statehood,” Andrzejewski said of D.C. officials, “but if they adopted the pay scale of the 50 states, they would all take significant pay cuts.”

As for the legislative branch, D.C. Council members were paid $141,282 in 2018, more than every state legislator—including the highest-paid state legislators in New York, who make $130,000 a year.

The only member of Congress who has a higher annual salary than D.C. Council Chairman Philip Mendelson’s $210,000 is House Speaker Nancy Pelosi, D-Calif., whose salary is $223,500.

“The D.C. City Council chairman out-earns all other members of Congress, including Mitch McConnell,” Andrzejewski said, referring to the Kentucky Republican who is Senate majority leader and makes $192,500.

“But he doesn’t out-earn Pelosi,” Andrzejewski said of Mendelson. “She’s the only member that out-earns [him].”