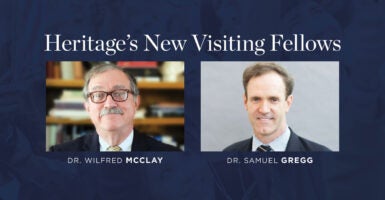 Wilfred McClay and Samuel Gregg are the newest additions to the Simon Center for American Studies, a department within the Feulner Institute at The Heritage Foundation.

The Heritage Foundation announced that two of the nation’s leading academics will join the think tank as visiting scholars in the Feulner Institute. Their work will focus on highlighting American conservative values and free market principles.

The two scholars, Wilfred McClay and Samuel Gregg, will join the Simon Center for American Studies, a department within the Feulner Institute, which was founded to protect traditional American ideals and to share those values with Americans of all backgrounds across the country.

“Our new visiting scholars will continue to forge successes for American values by highlighting the importance of individual sovereignty, equal opportunity, limited constitutional government, and economic freedom,” said Angela Sailor, vice president of the Feulner Institute. “We will continue our efforts to rally all Americans regardless of race, creed or class around building an America where freedom, opportunity, prosperity, and civil society flourish.”

McClay brings with him years of experience on the topics of American exceptionalism, federalism, and American history. He currently serves as the G.T. and Libby Blankenship chair in the history of liberty at the University of Oklahoma.

Gregg will contribute his expertise on the moral case for capitalism and free markets, and how individual freedom and traditional values fuse to form American conservatism. He is the research director of the Acton Institute, a think tank whose mission is to promote a free and virtuous society characterized by individual liberty and sustained by religious principles.

You can read more about Heritage’s two new visiting fellows below.

Wilfred M. McClay is the G.T. and Libby Blankenship chair in the history of liberty at the University of Oklahoma, and director of the Center for the History of Liberty. His book, “The Masterless: Self and Society in Modern America,” was awarded the Merle Curti Award of the Organization of American Historians for the best book in American intellectual history.

Among his other books are “The Student’s Guide to U.S. History,” “Religion Returns to the Public Square: Faith and Policy in America,” “Figures in the Carpet: Finding the Human Person in the American Past,” “Why Place Matters: Geography, Identity, and Public Life in Modern America,” and “Land of Hope: An Invitation to the Great American Story.”

McClay served on the National Council on the Humanities, the advisory board for the National Endowment for the Humanities, for 11 years. He is a member of the U.S. Semiquincentennial Commission, which has been charged with planning the celebration of the nation’s 250th birthday in 2026.

He has been the recipient of fellowships from the Woodrow Wilson International Center for Scholars, the National Endowment for the Humanities, and the National Academy of Education. He is a graduate of St. John’s College (Annapolis) and received his Ph.D. in history from Johns Hopkins University.

Gregg oversees Acton’s research program and team of scholars and is responsible for oversight of research international programming, including budgeting, management, personnel, publishing, and program development and implementation.

He is the author of 13 books, including “Economic Thinking for the Theologically Minded,” “On Ordered Liberty,” the prize-winning “The Commercial Society,” “Wilhelm Röpke’s Political Economy,” “Becoming Europe: Economic Decline, Culture, and How America Can Avoid a European Future,” “For God and Profit: How Banking and Finance Can Serve the Common Good,” and “Reason, Faith, and the Struggle for Western Civilization.”

He has also co-edited books such as “Profit, Prudence and Virtue: Essays in Ethics, Business and Management” and “Natural Law, Economics and the Common Good.” Two of his books have been short-listed for Conservative Book of the Year. Many of his books and articles have been translated into a variety of languages.