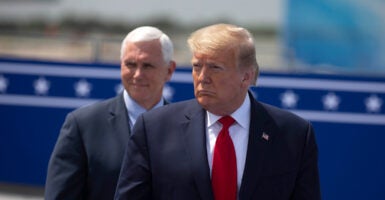 "I wish I could give him a great big bear hug and thank him!" reader Sterling Baer writes of Vice President Mike Pence. Pictured: Pence waits with President Donald Trump on a NASA rooftop May 30 before the launch of the SpaceX Falcon 9 rocket from Kennedy Space Center in Cape Canaveral, Florida. (Photo: Saul Martinez/Getty Images)

Editor’s note: We’re back with some of your letters to The Daily Signal. We didn’t mean for this column to be away for so long, but we also didn’t think we’d still be covering the pandemic. We hope that you and yours are well. Be sure to drop us a line at [email protected]—Ken McIntyre

I read the article out loud to my wife and got emotional. Afterward, I said to her: “I love this man. I love our vice president for being such a good, good man!”

I wish that faith was as foundational a principle in our nation as it was during our Founding Fathers’ time, or even during my growing-up time 60 years ago. Were it so, we would not be in this awful situation calling good evil and evil good as an amoral society.

I must admit that I and so many others are terrified of the alternatives that we face. We continue every day to try to live out our Christian virtues and teach them to our children and grandchildren. We continue to be silenced and abused by these evil, leftist socialist leaders of our nation and media.

God bless you, Rob Bluey, for your powerful reporting on the good, virtuous, and praiseworthy efforts of our vice president and this administration. We pray for them and all who love America that good will win, that justice will prevail and that life, liberty, and trusting in God will remain sacrosanct as the bedrock of America.

May God bless us all. If you have any chance at all to provide feedback to the vice president, please tell him how much we love him and pray for him every day. I wish I could give him a great big bear hug and thank him!

We can never, ever give in or give up the fight against those who would silence us or take away our God-given rights. Keep up the good fight!—Sterling Baer, Mesa, Ariz.

Thank you for the informative article on Vice President Mike Pence in Florida. So refreshing to read positive and true reporting and telling like it really is.—Sherry Scoffield, Townsend, Mont.

Dear Daily Signal: Thanks to Virginia Allen for the podcast shining a light on the dysfunction happening in our Minnesota state government (“What’s Going On in Minneapolis After City Council Vote to Defund Police”). It’s embarrassing to be a citizen here, with the recent unrest in the Twin Cities.

Although I do feel that the majority of Minnesotans support our police, I work in the heart of the metro surrounded by far-left supporters and it is difficult to feel comfortable speaking about this topic.

Righteousness will prevail. We cannot always understand, but God is working. Everything he means for good.

When we feel powerless, our most powerful tool is prayer. Sometimes it takes the stronger person to remain silent, pray, and speak when the opportunity for truth presents itself.—S. O’Konek, Minnesota

Dear Daily Signal: I have been a member of The Heritage Foundation for many years. I am thinking that Heritage should partner with Hillsdale College and purchase many booklet copies of the U.S. Constitution and send them with a cover letter to each mayor of a major city and to each governor.

Politely explain that it would benefit them to actually read the Constitution and understand the principles and legal doctrine inherent in it as our national compact that explicitly defines, describes, and limits the powers of government over We the People. Emphasize that Article 6 establishes the supremacy of the national government over the states and localities in regard to key principles of law and governance—the structure of federalism in the American republic.

The Founders specifically created a representative republic. America is not, nor has it ever been, a true democracy. That is political rhetoric pushed by the Democrat Party for over a century for self-serving political propaganda purposes.

I also note that not teaching the content of the Constitution became routine in our public school system during the 1960s. My children learned about the Constitution in school when we transferred them into a private Christian school outside Cincinnati in 1979.

My children had some earlier exposure, because I had purchased Mott Media’s 1972 reproduction of the McGuffey Eclectic Readers series, which my parents, as children, had learned from in school during the early 1900s. (Mother, as a teacher in northern Colorado, used the second edition from 1925 to 1937.)

The failure of state or local officials even to seek to maintain “domestic tranquility” (law and order for domestic peace)—per the stated goal in the preamble to the Constitution—is itself a violation of their oath of office, rendering them unfit to continue in office. In actively advocating nonenforcement of existing laws and statutes, they become guilty of misfeasance and malfeasance in office and are subject to suspension and removal from office for dereliction of duty.

It is far past time to be overly polite to the point of failing to speak directly to the matters at hand. We are dealing with many political personalities who were brainwashed in school into thinking that if they memorized and repeated liberal dogma, that somehow meant they were smart. Even though they actually had failed to learn facts and useful information, including gaining the ability to practice the art and discipline of critical thinking.

So the people who as schoolchildren were trained to believe they were smart (just by holding certain opinions and views about living) now are using politics as a popularity contest to salve their personal ego-needs deficit. They’re also controlling multitudes of others.

And yet, they have no clue about how society really works and how humans decide to function in their own self-interest. And they don’t believe in America’s foundational moral code. They instinctively serve their own interests, but deny that reality for others (who aren’t really considered as equals).

Liberals are eminently superior to everyone else, and they’ll tell you that. However, they are unprepared for the important task of balanced and firm moral leadership.—Herbert G. Branch, Easton, Md.

Dear Daily Signal: Thanks very much for Kelsey Bolar’s article on gig work and what California is doing to it (“This California Law Is Ripping Away American Dreams. The Left Wants to Take It Nationwide.”). I sincerely hope you’ll stay on this story and provide updates and increasing visibility to the issue.

Of all the many problems the country is encountering, I think this is one of the most important and will have the most enduring consequence.

Not only that, but Kelsey’s writing is well crafted and easy to read. So thanks for that as well!—Jim Lowitzer, Collierville, Tenn.

Dear Daily Signal: America is on the cusp. The image of the young punk demonstrator, with a smirk on his face, saying that the statue in the District of Columbia representing Lincoln freeing the slaves will be torn down is appalling (“Park Police Won’t Say Whether They’ll Prevent Toppling of Lincoln Statue”).

It has become the face of America. As an old fart with lots of mileage and real street smarts, I can scold all these “Whatever Generation” types and millennials. That’s what grandpas do, right? We didn’t get this old by being stupid.

This whole movement is now doing more to divide our country than to unite it. Demonstrations have turned into dog fights, with everybody losing. No one is immune; the recent inciting of confrontations with Italian communities over Columbus is a travesty.

There is a breaking point, a point of no return. The whole point of contention has been lost to impulse and knee-jerk reactions by those with a need to hear their own voice, much like that of the proverbial barking dog. The ”pack” mentality is incited by this barking dog, causing all to bark incessantly—which eventually leads to bites and fights.

The elder leadership needs to step in before that point of no return. Discretion is the better part of valor. Cooler heads need to prevail.

The desecration of everything historical is just an agenda and not a solution. It merely divides and incites. I hear the words ”civil war” from those on both sides, without the knowledge of what the consequences of that phrase brings because … this takes an effort.

This whole thing has worn out its welcome. It is way past time to sit down at the table.—S. Miller, Oklahoma

Dear Daily Signal: For many years, I was a registered Democrat and believed that “my party” was constantly looking out for me and social causes—and what was best for the U.S.

Then, about 20 years ago, I got in a rip-roaring argument with a friend of mine who opened my eyes to reality. Within a week, I realized that I was very much a conservative and changed my affiliation to Republican.

I do not vote blindly. It’s necessary to research and understand who the people are who are running for public office.  So, yes, I am a registered Republican, but I am also a proud American who looks for the best in people.

Today, after listening to Rob Bluey’s podcast interview with Larry Elder (“Larry Elder Film ‘Uncle Tom’ Gives Voice to America’s Black Conservatives”), I felt, finally, that there is a world out there that sees things as I do. The interview was incredible. I was extremely impressed with both gentlemen.

Thank you to Mr. Bluey for taking the time to share Mr. Elder’s story with us. I feel like I have tons of information, factual information, which will allow me to stand straighter and prouder than ever before.

I hope and pray that both of these men continue to be voices for the logical, learned, and studied Americans who truly believe that it is time to publicly expose the truth.—Stephen Rubin, Beit Shemesh, Israel (formerly of Fairfield, Conn.)