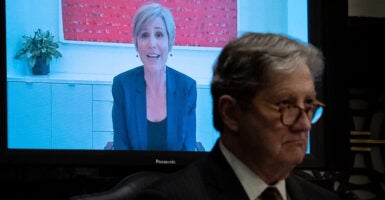 “I’m not aware of anyone at the Department of Justice doing anything to try to keep Donald Trump from becoming president," Sally Yates, former deputy attorney general, testifies Wednesday. Pictured: Yates responds to a question from Sen. John Kennedy, in the foreground, in testifying remotely during a Senate Judiciary Committee hearing. (Photo: Erin Schaff/Getty Images)

A top Obama Justice Department official told a Senate committee Wednesday that she wasn’t aware of many aspects of the FBI’s initial investigation of any connection between the Kremlin and the Trump campaign, and was shocked by others.

Sally Yates, deputy attorney general during the Obama administration, testified before the Senate Judiciary Committee about issues related to the beginning of the investigation of an alleged conspiracy between the Trump campaign and the Russian government.

WATCH >>> White House press secretary Kayleigh McEnany lay out what the FBI did to Lt. Gen. Michael Flynn—and why it should never happen to any American ever again.

At one point, Yates agreed with Chairman Lindsey Graham, R-S.C., that then-FBI Director James Comey had “gone rogue” in investigating the Trump campaign. Yates was Comey’s superior at the Justice Department.

Yates, testifying remotely, told the Judiciary Committee that she would not have approved the Justice Department’s application for a court warrant to spy on Carter Page, then a Trump campaign volunteer, had she been aware of “errors and omissions” in the application.

In a later investigation, Justice Department Inspector General Michael Horowitz determined that the application to surveil Page was based mostly on a discredited opposition-research document compiled by former British intelligence officer Christopher Steele and paid for by the Democratic National Committee and the Hillary Clinton campaign.

Yates said she “certainly was shocked” by the “conduct that was reflected” in the Horowitz report regarding the government’s request to a secretive federal court for a warrant under the Foreign Intelligence Surveillance Act.

“I believe that the Department of Justice and the FBI have a duty of candor with the FISA court,” the former deputy attorney general said.

Graham, the committee’s chairman, asked her: “Do you believe that they fulfilled that duty?”

“No, I do not believe that they did,” Yates replied.

Graham noted that Yates signed the FISA application in both October 2016 and January 2017.

“Knowing then what you know now, would you sign that application?” he asked.

After some give and take, she offered a definitive answer.

“I wouldn’t have signed anything that I knew contained errors or omissions,” Yates said.

Graham: “Did that contain errors and omissions?”

Yates: “Yes, and I would never knowingly sign a document. I didn’t do that in the 27 years—”

Yates, 59, first hired by the Justice Department as an assistant U.S. attorney in 1989, apparently was referring to her years of service there.

Yates: “No. If I had known it contained incorrect information, I certainly wouldn’t have signed it.”

Early in the hearing, Democrats railed against Graham for aggressive questioning of Yates. Sen. Patrick Leahy, D-Vt., accused Graham of attacking Yates for being a woman.

But throughout the hearing, Graham insisted that he believed Yates didn’t knowingly do anything wrong.

“I’m not saying you lied to the court. I’m saying you signed something that was a lie and you didn’t know it,” Graham said.

Yates also said it would “shock” her if anyone in the Justice Department actively took action to prevent Donald Trump from being elected president.

Yates responded: “I don’t like—I don’t respect the manner in which he has carried out the presidency.”

Kennedy asked whether she despised Trump.

Kennedy went on to ask: “Isn’t it true that there were a handful of people at the FBI that despised Donald Trump and wanted to do everything they could do to keep him from being president?

After some back and forth, Yates said: “I’m not aware of anyone at the Department of Justice doing anything to try to keep Donald Trump from becoming president.”

Yates’ assertion came after a stream of revelations, including in the inspector general’s findings and in text messages showing certain FBI and Justice Department officials expressing antipathy for Trump in personal communications.

“I’m not aware of anybody doing that,” Yates said. “That would not only surprise me, but shock me.”

Kennedy asked whether the so-called Steele dossier about Trump was “junk,” and added: “Tell me every step you took to verify the accuracy of the Steele dossier.”

Yates: “I relied on the FBI as the fact finders here, and the lawyers in the [Justice Department’s] National Security Division, to vet the accuracy of the FISA application.”

Kennedy: “All of whom hated Trump, right?”

Yates: “No, Senator, we did not hate Trump. I have to speak up here for the career men and women of the Department of Justice.”

Kennedy cut her off.

“Oh, I’m not talking about all the career men and women,” he said. “I think you and your colleagues have tarnished the reputation of the FBI.”

Ultimately, special counsel Robert Mueller found no evidence of a conspiracy between Trump or his campaign with Moscow to influence the election in his favor.

Yates said that an Oval Office meeting on Jan. 5, 2017—15 days before Trump took office—was about a counterintelligence investigation and not about a criminal investigation of Trump campaign aides.

Graham asked: “Was the vice president there?”

Graham: “Did he mention the Logan Act?”

The Logan Act is a 1799 law, never used in a prosecution, designed to prevent unauthorized officials from negotiating U.S. foreign policy.

“I don’t remember the vice president saying much of anything,” Yates said of Biden.

Graham: “Did anyone mention the Logan Act?”

Yates said she had a “vague memory” of Comey talking about charging incoming Trump national security adviser Michael Flynn with violating the Logan Act, but didn’t know whether it was in that Oval Office meeting.

“I do recall Director Comey mentioning it at some point,” Yates said. “I’m not sure it was in the meeting in the Oval or in the discussion that he and I had.”

Graham asked whether Flynn’s phone conversation with Russian Ambassador to the U.S. Sergey Kislyak amounted to a violation of the Logan Act.

“It certainly could have been a technical violation, but that was not the focus of the FBI or us,” Yates said. “We were focused on a counterintelligence investigation.”

Graham noted that on Jan. 4, 2017, the FBI recommended dropping Flynn from the investigation of Russian election meddling.

“I know that now. I didn’t know that at the time,” Yates said.

Graham: “On Jan. 4, the FBI said there is no reason to keep looking at Gen. Flynn. On Jan. 5, you have a meeting with the FBI director where you believe he mentions the Logan Act in regard to Gen. Flynn. Is that correct?”

Yates said she wasn’t privy to the FBI’s internal documentation, but insisted the goal was not a criminal investigation, but rather a counterintelligence investigation.

Yates said early in her testimony that she was troubled by Flynn’s interaction with the Russian ambassador about easing U.S. sanctions on Russia for its meddling in the 2016 election.

“We had Gen. Flynn engaging in discussions with the Russian ambassador that were essentially neutering the American sanctions,” Yates said. “And that is a very curious thing to be doing, particularly when the Russians have been acting to benefit President Trump and then covering it up.”

Graham and Yates seemed on the same page regarding a distaste for Comey, the FBI director appointed by Obama in 2013 and fired by Trump in May 2017.

Yates said she didn’t know the FBI was investigating Flynn. She said she wasn’t aware of the FBI’s interview with Flynn that took place Jan. 24, 2017, four days after Trump was sworn in as president.

“I didn’t authorize that interview because I wasn’t told about it in advance,” Yates said. “But that’s not the same thing as saying I don’t think there was a legitimate basis for it.”

As acting attorney general in the opening days of the Trump administration, Yates has said before her testimony, she wanted to go to the Trump White House and tell them about concerns regarding Flynn.

Instead, the FBI sent two agents to interview Flynn at the White House without his lawyer present.

“I was upset that Director Comey didn’t coordinate that with us and acted unilaterally,” Yates told the Senate committee.

Yates responded:  “You could use that term, yes.”