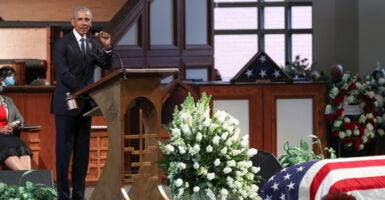 Traditionally, funerals are supposed to serve at least three purposes: honor the life of the deceased, comfort those who mourn his passing, and preach a message about eternity and the brevity of life.

Tradition was discarded during John Lewis’ funeral last week in Atlanta. Like the memorial service of the late Sen. Paul Wellstone, D-Minn., in 2008, the Lewis service was a political event that included veiled denunciations of President Donald Trump. There were allegations of voter suppression by Republicans and a comparison of Trump by former President Barack Obama to the late Alabama governor and segregationist, George Wallace.

On that last point, it was Wallace who stood in a schoolhouse door in 1963 in an effort to stop African Americans from entering the University of Alabama. Today’s Democrats have it reversed. They are blocking poor kids from escaping failed public schools, bowing to the desires of teachers unions that support and contribute campaign money to Democratic politicians.

Obama also criticized Trump for sending federal agents to Portland, Oregon, to help quell violence that had gone on for more than 60 days.

Presumably, Obama would not have been opposed to President Dwight D. Eisenhower’s decision in 1957 to send the 101st Airborne Division to Little Rock, Arkansas, to protect nine black students entering Central High School.

Someone should ask the former president if he approved of President John F. Kennedy’s decision on May 21, 1961, to send 300 federal marshals to Montgomery, Alabama, to keep order after race riots broke out when then-Gov. John Patterson said he could not guarantee the peace.

Obama apparently ignored another historical event in which federal forces were used to achieve a civil rights goal.

On September 20, 1962, James Meredith attempted to register as a student at the University of Mississippi. The entrance was blocked and rioting erupted. Attorney General Robert Kennedy sent 500 U.S. Marshals to the school. John F. Kennedy sent military police, troops from the Mississippi National Guard, and even U.S. Border Patrol officials.

Is Obama OK with Kennedy’s decision on June 11, 1963, to federalize Alabama National Guard troops to end then-Gov. George Wallace’s blockade of African Americans attempting to enter the University of Alabama?

On March 20, 1965, President Lyndon Johnson federalized the Alabama National Guard to protect the civil rights march from Selma to Montgomery of which Lewis was a notable part. Obama probably favors that decision. A reporter should ask him.

Alabama, Mississippi, and Arkansas all had governors at the time who were Democrats and segregationists and yet today’s Democrats claim Trump is a racist.

In his “eulogy,” Obama also mentioned mail-in ballots, the latest effort by Democrats (early voting and no required identification are other efforts) that many believe could open the door to voter fraud.

One pastor at the Lewis funeral even reached back to the Reagan administration and erroneously blamed the 40th president for the poor housing conditions endured by some African Americans.

Democrats and their media allies consistently ignore the fact that Jim Crow laws, the Ku Klux Klan, and other immoralities were all led by Southern Democrats.

Lewis’ legacy and his brave fight for civil rights will always remain untarnished. But Lewis was also a partisan Democrat, who refused to attend Trump’s inauguration in 2017 and believed to the end that the Russians helped Trump beat Hillary Clinton, though that would likely have required the infiltration of every precinct and voting machine in America, something not even Lewis claims was possible.

What was even sadder than the politicized funeral service was the applause from attendees, who apparently believe every word that comes from Obama’s mouth, though none of this kind of talk improves a single life. It makes one wonder why so many African Americans continue to be loyal to the Democratic Party.