Religious Liberty Is Important, but It’s Not Enough 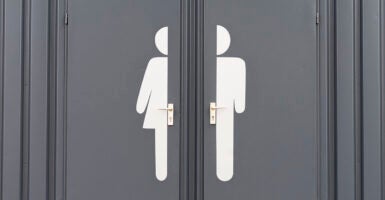 The past two weeks brought welcome rulings from the Supreme Court on religious liberty. We should celebrate these victories, because religious liberty is an authentic natural and human right. But it’s not enough. And even the best of religious liberty wins can’t adequately contend in a proxy war over substantive issues.

We must do more politically to protect human flourishing and the authentic common good. This is particularly true with respect to the court’s Bostock ruling, which read progressive gender ideology into our nation’s civil rights laws. A good ruling on the ministerial exception in Our Lady of Guadalupe, while important, does not even begin to address the many concerns there.

We need a more holistic response in terms of legislation and litigation to protect all people and all the various goods and interests at stake. We need to contend about the truth of the matter.

Before turning to that, consider the three recent Supreme Court religious liberty victories. First, in Espinoza, the court struck down the application of the notoriously anti-Catholic Blaine Amendments as applied to public funding for private education.

As the court ruled, the Constitution doesn’t require funding for private education, but if the government opts to fund students attending private schools, it can’t exclude those attending religious schools just for being religious.

The court’s logic is likely to apply to all government funding—the government can’t exclude a group simply because it’s religious from funding for which it would otherwise be eligible.

Second, in Little Sisters, the court ruled that the Trump administration had the authority to protect the religious liberty of the Little Sisters of the Poor from the Obamacare Health and Human Services mandate on contraceptives and abortifacients.

And third, that same day, the court ruled in Our Lady of Guadalupe that the constitutional doctrine known as the ministerial exception provides broad protections for religious schools to make staffing decisions for themselves based on their own religious criteria.

The details in all of these cases are important, but we need not dig too deeply into them now. For even on the most generous and expansive readings possible, these rulings—while correct, good, and important—are not sufficient.

Nor, I should note, are they intended to be.

Why Aren’t These Wins Enough?

Take, for example, the school choice victory. As important as protecting equal access to government funding for religious schools is, it does nothing to address what is going on at the government-run schools we call “public.”

If the public schools are indoctrinating students with the “Gender Unicorn,” allowing access to single-sex facilities based on “gender identity,” and forcing girls to compete athletically against boys who identify as girls, equal access to government funding (when it exists) isn’t enough. It’s not enough for the vast majority of American children—including the majority of religious children—who are trapped in our public school system.

And, as soon as the Trump administration leaves office and an administration hostile to religious liberty comes to D.C., the regulations protecting the Little Sisters will likely be watered down or simply eliminated.

Even today, under the Trump administration, the federal government tells employers their health care plans must provide cost-free coverage of twenty contraceptives, four of which carry Food and Drug Administration labels saying they can cause an early abortion. Our government is mandating the coverage of pills that can kill unborn babies.

That’s not merely a religious liberty issue. And in the not too distant future, the safe harbor protecting those who object to this mandate is likely to be eliminated. Indeed, Joe Biden responded to the Little Sisters’ win by stating, “If I am elected, I will restore the Obama-Biden policy that existed before the Hobby Lobby ruling.”

Finally, consider the ruling on the ministerial exception. It’s a great ruling, protecting the ability of religious institutions to continue their missions by staffing with people who share those missions. In that sense, it potentially limits some of the damage from Bostock’s redefinition of sex to include “sexual orientation” and “gender identity.”

The ministerial exception likely protects a religious school from being forced to employ teachers who reject the virtue of chastity by engaging in same-sex sexual conduct, entering same-sex unions, or adopting a “gender identity” at odds with their bodies, if the school judges such activity to be contrary to their religious teaching and mission.

Yet even here, there will likely be costly litigation to achieve these legal victories, and the litigation process will be part of the punishment.

Will it now be employment discrimination in benefits if the health care plan that the religious owners of a retail arts and crafts store offer to employees does not cover testosterone therapy for their female employees who identify as men but does cover it for male employees with low testosterone? Will we need a lengthy and costly Religious Freedom Restoration Act battle to find out?

Furthermore, activists are likely to sue to extend the logic of Bostock to other areas of law that forbid discrimination on the basis of sex, such as education, housing, and health care. And in all of these areas, religious liberty isn’t the only—or even the primary—concern.

While the ministerial exception does nothing for student conduct policies at religious schools, Title IX itself contains a religious exemption, so many religious schools’ campus policies could be protected from the logic of Bostock.

But what about non-religious schools? What about shelters for homeless—or abused—women? What about medicine?

The simplistic logic of the Gorsuch opinion in Bostock suggests some pretty bad outcomes in these situations. Here’s how Justice Neil Gorsuch summarizes his own test:

Privacy and safety at a shelter, equality on an athletic field, and good medicine are at stake for everyone—religious or not.

An unstated, frequently unexplored aspect of any “discrimination” claim is that two instances be “comparable,” that the two employees, or athletes, or patients, or shelter guests be “similarly situated.” Perhaps in the employment context Gorsuch couldn’t see this, but health, education, and housing provide starker instances.

Start with health. Consider a case where a patient accuses a doctor or hospital or health care plan of “discrimination” because they won’t perform or offer or pay for breast removal as part of a “gender transition” procedure.

The first thing to note is that Gorsuch’s test “if changing the patient’s sex would have yielded a different choice by the doctor” doesn’t apply. Change the patient’s sex and there are no breasts to remove. Indeed, as I point out in “When Harry Became Sally,” recognizing differences between the sexes is increasingly regarded as vitally important for good medical practice, because scientists have found that male and female bodies tend to be susceptible to certain diseases in different ways, to differing degrees, and that they respond to treatments differently.

The Institute of Medicine at the National Academy of Sciences published a report in 2001 titled “Exploring the Biological Contributions to Human Health: Does Sex Matter?” The executive summary answered the question in the affirmative, saying that the explosive growth of biological information “has made it increasingly apparent that many normal physiological functions—and, in many cases, pathological functions—are influenced either directly or indirectly by sex-based differences in biology.”

Because genetics and physiology are among the influences on an individual’s health, the “incidence and severity of diseases vary between the sexes.”

Far from its being discrimination to “rely on a patient’s sex,” it is a requirement of good medicine, which is sex-specific to the male or female body of the patient.

But that’s not all. Suppose the argument is that the doctor/hospital/insurer covers double mastectomies in the case of cancer, but not in the case of gender dysphoria. For a discrimination claim to be successful, you’d have to argue that a patient with cancerous breast tissue is comparable, similarly situated to a patient with healthy breast tissue.

Perhaps some physicians will argue that the non-cancerous breasts are in fact unhealthy because they are the cause of the gender dysphoria. That will only further highlight that what we really have here is a disagreement about the diagnosis and treatment of gender dysphoria.

And policies—like the Trump administration’s recent regulation on Section 1557 of the Affordable Care Act—are entirely defensible for refusing to treat a disagreement on medical care as if it were discrimination based on identity.

If you can recognize that these are not in fact comparable, similarly situated individuals, then it’s hard to make a claim that “discrimination” in the pejorative sense has occurred.

Yes, we’ve treated males and females differently—we have an NBA and a WNBA—but that is precisely in order to treat them equally. Equality—fairness—in athletic competition frequently requires taking the bodily differences between males and females seriously.

By comparison, it never requires taking skin color into account. Thankfully, the days of racially segregated sports are over. Our skin color makes no difference to what we do on the athletic field. Nor does it make a difference in the bathroom, locker room, or shelter. That’s why bans on racial discrimination did away with separate facilities for black and white.

But bans on sex discrimination did not do away with separate facilities for male and female—a reality that Gorsuch’s simplistic test for discrimination fails to account for.

The reason? A person with male genitalia is not comparable, not similarly situated to a person with female genitalia when it comes to an emergency shelter or locker room. As a result, this aspect of the Trump administration’s recent Department of Housing and Urban Development rule on sex-based housing is eminently defensible.

All of these administrative actions, of course, can be readily undone by a future hostile administration. Just look at what Joe Biden has already promised.

Thus, we’ll need litigation and legislation not solely on religious liberty, but on the substantive issues at stake: privacy and safety in single-sex facilities, equality and fairness in single-sex sports, and good medicine based on the realities of our biological make up as male or female human beings.

Through litigation and legislation, we need to make it clear that it’s lawful to act on the convictions that we are created male and female, and that male and female are created for each other, that no institution has to let males compete against females in sports, that no institution has to allow males into women-only locker rooms and shelters, that no physician has to engage in so-called “gender-affirming” care.

The religious liberty triumphs of the past several days are important. But they’re not enough. Not nearly so.