11 Incidents in Which Lawful Gun Owners Made a Difference 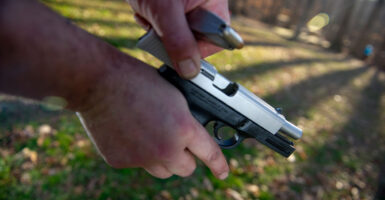 During these difficult and uncertain times, many Americans who never before considered the prospect of gun ownership are coming to appreciate their Second Amendment rights. (Photo: Ann Hermes/The Christian Science Monitor/Getty Images)

As the Supreme Court continued its decadelong silence in protecting the Second Amendment, Americans last month nevertheless proved that they understand the importance of the right to keep and bear arms.

The FBI conducted a record-high 3.9 million background checks for firearms sales and transfers in June. The previous record of 3.7 million was set just this past March.

It is little surprise that, during these difficult and uncertain times, many Americans who never before considered the prospect of gun ownership are coming to appreciate their Second Amendment rights. Even in “normal” times, Americans often rely on their firearms to protect themselves and others.

For this reason, The Daily Signal each month publishes an article detailing some of the previous month’s many news stories on defensive gun use that you may have missed—or that might not have made it to the national spotlight in the first place. (Read accounts from 2019 and 2020 here).

The following examples of defensive gun use represent only a small portion of the stories we found in June. You can explore more examples in The Heritage Foundation’s interactive Defensive Gun Use Database.

Sometimes, lawful gun owners get it wrong and end up in the national news for using their guns irresponsibly. But more often, they get it right and few of us hear about it.

Many of us don’t hear about mothers defending their sons, or good Samaritans coming to the rescue of innocent neighbors.

Many of us don’t hear about the countless others whose lives and livelihoods were protected because of lawfully owned firearms in the hands of law-abiding citizens.

As the silence from the Supreme Court reaches deafening levels, we promise to keep telling these stories and highlighting the importance of protecting the right to keep and bear arms.