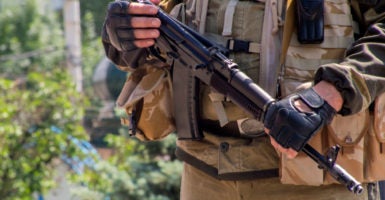 When lawful gun owners end up as national news stories for making questionable decisions with their firearms, it reflects poorly on all gun owners. (Photo: Igor Golovnov/EyeEm/Getty Images)

Millions of American gun owners are incredibly responsible. Every month, I find story after story of law-abiding citizens who used their firearms in lawful defense of themselves or others.

Unfortunately, in looking through these stories, I also find far too many instances where gun owners messed up, acted irresponsibly, or didn’t appear to fully understand the limits of their right to self-defense.

Just as we highlight examples of responsible gun owners, it’s vital that we “call out our own” when gun owners make a mistake.

Particularly with the unprecedented increase in new gun owners in recent months, we must analyze these situations and learn from them, so that we avoid making them in the future.

So, what are these common mistakes, and what steps can you take to help protect against making them yourself?

This mistake has recently come to the national forefront with the death of Ahmaud Arbery, who was chased down and ultimately killed, reportedly by Travis and Greg McMichael, in Georgia. The McMichaels since have been arrested and charged with murder.

Commentators have spent many thousands of words analyzing all of the ways in which the McMichaels are said to have violated the law, and why they can’t rely on claims of self-defense after having unlawfully initiated a violent confrontation.

That is, regrettably, far from the only example of gun owners crossing the line from lawful self-defense into unlawful vigilantism.

While the legal minutiae of these cases are certainly important, they can largely be distilled down into one overarching theme: Don’t confuse defensive gun use with active vigilantism.

You are a civilian, not a law enforcement officer. While you certainly have a right to use lethal force to defend yourself against imminent threats of violence, you typically have neither the right nor the duty to actively pursue criminal suspects.

Of course, in our monthly defensive gun use series, we often highlight “citizen’s arrests,” in which civilians lawfully detain suspects they catch in the middle of a crime.

That’s a legitimate and lawful use of a firearm, and it can be done in a responsible manner. But attempting a citizen’s arrest should be reserved for cases of a clear crime committed in your immediate presence, and shouldn’t involve an active, armed pursuit of those you merely suspect of criminal activity.

Moreover, conducting a citizen’s arrest is a risky action that can place you in serious legal jeopardy if your perception of criminal activity is incorrect.

The line between a lawful citizen’s arrest and unlawful assault or false imprisonment is often very thin and not always very clear. It’s imperative that you err on the side of caution and understand the particular laws and limitations within your state.

If criminals happen to find you, that’s one thing. Protect your home, business, and family.

But if you’re not in immediate danger or a serious felony isn’t occurring directly in front of you, call the police. Let the officers do their jobs.

A second all-too-common mistake occurs when gun owners use lethal force to deal with situations that don’t necessitate it.

Importantly, even laws allowing for a “citizen’s arrest” typically don’t authorize a person conducting such an arrest to use lethal force outside of the limits laid down in self-defense statutes.

In other words, just because someone is committing a crime doesn’t mean that you have a legal (or moral) right to shoot them. States generally require that you be in reasonable fear of imminent death or serious injury before you can pull the trigger.

Consider the following stories where gun owners overstepped legal boundaries about the use of lethal force and found themselves (rightly) arrested for a crime:

None of those scenarios reasonably called for the use of deadly force. Firearms are a last resort against imminent, violent threats, not a default for dealing with minor and nonviolent criminal actions.

Sometimes, violations of basic gun safety norms are so blatantly reckless that it seems almost silly that we need to repeat them. And yet, here we are:

But there are other actions that a significant minority of gun owners, especially first-time gun owners, might not immediately recognize as reckless. Perhaps the biggest example of that is the firing of “warning shots.”

Most firearms instructors will counsel against firing warning shots, and for good reason. When you fire a warning shot, you are intentionally missing your target. Those rounds are going to strike something or someone else. It could also land you in prison.

Often, people who fire warning shots do so because of a well-intentioned desire to avoid using lethal force. While this is a perfectly respectable desire, warning shots are still lethal force—just not directed at a specific, identifiable threat.

If you are so in fear for your physical safety that you’re pointing a gun at a threat, any use of lethal force should be directed at that specific threat. If you’re not sure whether you actually want to use lethal force or whether you would be justified in doing so, use alternative, nonlethal or less-lethal force.

But please don’t intentionally miss your target and place others in danger by firing warning shots.

Moreover, be sure of your target. Don’t fire through walls or doors or randomly out into the night to “scare off” potential threats.

Why These Mistakes Matter—and How to Avoid Them

When lawful gun owners end up as national news stories for making questionable decisions with their firearms, it reflects poorly on all gun owners.

Worse, these stories are often used to support the common gun control advocates’ position that the average citizen simply can’t be trusted to handle firearms responsibly.

So, what can you do?

Know your state’s self-defense laws, and any other laws relevant to gun ownership. These sorts of topics are sometimes covered in basic gun safety and concealed-carry classes, but consider completing additional training under certified experts who can help you understand how these laws apply under various real-world circumstances.

It’s not enough to just receive initial training and call it good. Continue pursuing regular training where you can assess self-defense scenarios that are likely to occur in your life, and think through how you would respond. That will help protect you against panic-induced mistakes.

Most of all, never stop investing in responsible gun ownership. Make the national conversation easier for all of us by knowing what it means to “be your best self” with your firearms.