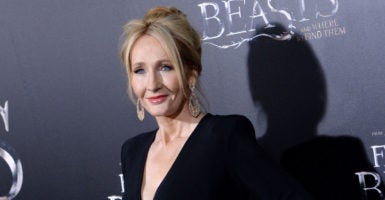 Matt Yglesias of Vox joined Noam Chomsky, J.K. Rowling, Steven Pinker, and dozens of others in signing a letter published by Harper’s Magazine Tuesday that argued for less intimidation of writers in the public sphere. Pictured: Rowling attends the "Fantastic Beasts and Where to Find Them" premiere on Nov. 10, 2016, in New York City. (Photo: Ben Gabbe/Getty Images)

A transgender Vox writer wrote to the site’s editors complaining that a colleague’s signature on a letter arguing against ideological conformity made the writer feel unsafe.

Emily VanDerWerff, Vox’s critic at large, tweeted Tuesday that co-worker Matt Yglesias’ signature on the letter made it harder to work at the media company.

Yglesias joined Noam Chomsky, J.K. Rowling, Steven Pinker, and dozens of others in signing a letter published by Harper’s Magazine Tuesday that argued for less intimidation of writers in the public sphere.

“His signature being on the letter makes me feel less safe at Vox and believe slightly less in its stated goals of building a more diverse and more thoughtful workplace,” VanDerWerff said. “The presence of Matt’s tweets and his signature to a letter like this do make my job slightly more difficult.”

In a later tweet, VanDerWerff  said Yglesias should not be fired for signing the letter because that would give the impression that he was being martyred for his beliefs. Yglesias has been supportive of the female-identifying writer, VanDerWerff added.

“The free exchange of information and ideas, the lifeblood of a liberal society, is daily becoming more constricted,” the Harper’s letter said.

The letter continued: “The restriction of debate, whether by a repressive government or an intolerant society, invariably hurts those who lack power and makes everyone less capable of democratic participation. The way to defeat bad ideas is by exposure, argument, and persuasion, not by trying to silence or wish them away.”

VanDerWerff said that the letter contained “dog whistles toward anti-trans positions.” The letter does not specifically address transgenderism, however.

“Matt Yglesias has been reported to his employer by a colleague for signing an open letter which argues that a climate of conformity, fear, and mutual surveillance has descended upon public intellectual life,” former New York Magazine contributor Jesse Singal tweeted.

“[Matt Yglesias] and I have a bumpy history. But I’m at a loss why he might deserve retribution or why he is in need of restoration for signing a defensible letter on the merits,” tweeted Jonah Goldberg, editor-in-chief of The Dispatch. “So far your argument is mostly guilt by association and feelings.”