Soros-Backed Organization Wanted US Foreign Aid to Go to Anti-American Groups. The Supreme Court Was Right to Say No. 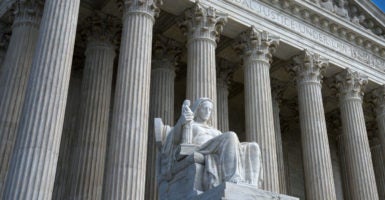 The Supreme Court has upheld the right of the United States government to distribute aid to foreign organizations in accordance with American interests. The June 29 decision in Agency for International Development v. Alliance for Open Society International represents a significant win for the protection of American freedoms.

The case affirms a vital principle of U.S. foreign involvement, one dear to the heart of the American taxpayer—U.S. money spent abroad must support U.S. interests and priorities. If a foreign organization wants our money, it cannot violate American positions.

Open Society argued that the U.S. government cannot withhold funds to foreign groups that contravene U.S. views. The Supreme Court held that it is the prerogative of the government to require foreign organizations to comply with the commitments of the U.S. to receive funding.

Justice Brett Kavanaugh wrote in the majority opinion that the U.S. “supplies more foreign aid than any other nation in the world … Congress may condition funding on a foreign organization’s ideological commitments … pro-democracy, pro-women’s rights, anti-terrorism, pro-religious freedom, anti-sex trafficking, or the like.”

Undoubtedly, the ruling will have implications for a vast array of American priorities, as Kavanaugh delineates. Moreover, conditionality, as mandated by Congress, “helps ensure that U.S. foreign aid serves U.S. interests”—a basic precondition for American involvement.

The U.S. government maintains many definitive foreign policy positions that affect international funding. It was the protection of American interests that resulted in withdrawal from the World Health Organization, which received $900 million in U.S. funding last year alone.

It also led to a request by USAID that United Nations coronavirus assistance not go toward abortion. Both concerned the fact that American money should not be channeled via international institutions for ends that violate U.S. interests.

At the risk of an untenable hypocrisy, efforts to hold the international system accountable must go hand in hand with the domestic accountability for ensuring American interests that this ruling upholds. As Justice Clarence Thomas emphasized in his concurring opinion, “The First Amendment does not mandate a viewpoint-neutral government.”

The American people have every right to ensure that their money goes to the promotion of the global good as determined by this viewpoint.

The Supreme Court has grappled with this question once before. In 2013, it held that money allocated to organizations via the United States Leadership Against HIV/AIDS, Tuberculosis, and Malaria Act could not be restricted on the basis of an organization’s position on prostitution.

This ruling pertained specifically to American organizations, which enjoy strict protections for freedom of speech under the First Amendment. The Supreme Court ruled against the government, deciding that an American organization could not be denied funds for not aligning with the U.S. government’s commitment to eradicating prostitution.

Open Society’s argument that foreign entities merited the same rights as affiliates of their American counterparts was rejected by the Supreme Court.

Kavanaugh further states that, “we see no constitutional justification for the federal judiciary to interfere in that fashion with American foreign policy.”

As he notes, forcing the government to fund noncompliant foreign programs would have the effect of either violating U.S. commitments or cutting off funding altogether—both unacceptable alternatives.

The Leadership Act, around which the case revolves, is considered one of the most successful U.S. aid programs, credited with the saving of an estimated 17 million lives.

U.S. aid conditionalities are designed not only to enhance American interests, but also to hinge assistance on the promotion of human rights abroad—a process which may be imperfect in its execution, but by no means need be mutually exclusive.

Although the dissenting justices are correct to emphasize the vital importance of free speech—a rarity in a time of increasing censorship—their claim that this ruling “will seriously impede the countless American speakers who communicate overseas” does not ring true. American free speech protections remain untouched. Foreign organizations likewise are free to oppose American views, they just cannot benefit from our money at the same time.

Far from curtailing speech, this ruling preserves the longstanding ability of the U.S. government to leverage its influence for its interests—a basic goal in any transactional interchange. That the U.S. seeks to benefit domestically from the conferral of vast sums of aid is a reality entirely befitting of a sovereign state.

Efforts to encourage global human rights protections via this aid are a crucial corollary of American international engagement that must be vigilantly protected and encouraged.