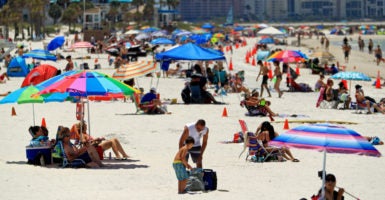 Before June 10, the state had never logged 2,000 new COVID-19 infections on any day. Since June 16, however, it has recorded at least 2,500 cases every day. Pictured: People visit Clearwater Beach after Gov. Ron DeSantis opened the beaches May 4, 2020, in Clearwater, Florida. (Photo: Mike Ehrmann/Getty Images)

Florida is melting down. Or is it?

While the state has shown a big increase in the number of daily new COVID-19 cases, there also are signs that those increases might not lead to a spike in hospitalizations and deaths.

“Gov. [Ron] DeSantis has lost control of Florida’s COVID-19 response,” Fried recently told The Guardian. “His policies are simply not working, and he’s recklessly reopening Florida, despite the data screaming for caution.

“Refusing to acknowledge the alarming patterns in cases, hospitalizations, and positivity is not only arrogant, but will cost lives, public health, and our economy,” she said.

Fried and others point to the rising number of new cases in Florida, especially since DeSantis announced the state’s Phase 2 reopening on June 5. Before June 10, the state had never logged 2,000 new COVID-19 infections on any day. Since June 16, however, it has recorded at least 2,500 cases every day, and daily new cases approached 10,000 on June 26.

Those sobering numbers could portend a spike in hospitalizations and deaths, something Florida has so far avoided.

But before jumping to that conclusion, it’s worth taking a deeper dive into the data. Let’s begin with the age distribution of Florida’s aggregate infections, hospitalizations, and deaths, through June 29.

When it comes to serious illness, hospitalizations, and deaths from COVID-19, age matters. A lot.

Since age is the best predictor of serious illness and death, the age of newly infected people is an important consideration.

If Florida’s spike in new infections is among younger people, it’s a less dire concern than if a disproportionate number of older people are testing positive for the contagion.

The following is a chart showing the number of daily new infections, along with the median age of the newly infected.

The top set of bars shows daily new cases. The bottom set shows the median age of those whose infections were confirmed on that date.

For example, on June 26, when the state logged a record (at least to date) 9,557 new cases, the median age of those who tested positive was 34. That median has held remarkably steady between ages 33 and 37 since mid-June.

That’s encouraging news. Those under 34 account for only 6% of hospitalizations and just 1% of deaths, as we saw in the first chart. The bulk of new infections in Florida is occurring among people in their mid-30s and younger.

Some of them, unfortunately, will become seriously or critically ill, and a small number won’t survive the illness. They and their families will suffer hardships that cannot be minimized.

But overall, if the increase in COVID-19 infections is occurring predominantly among younger people, the incidence of serious illness and death will be lower than if the increase were primarily among the elderly.

Florida’s numbers in that respect are at least mildly encouraging.

While the state reports the median age of new cases, it doesn’t tell us what percentage are occurring among the elderly. That’s the most critical data point.

The state has published data on every case reported as of June 29, but not in a machine-readable format. Manually entering data for 6,000 cases is impractical. By the time I finished with today’s numbers, it would be time to start on tomorrow’s.

So, I did the next best thing. I took a random sample of 362 cases, weighted by county, that were reported for June 29. The following table presents the results. The sample has a margin of error of +/- 5 percent at a 95% confidence interval, so it’s not a point estimate.

The most striking difference between the June 29 sample and the aggregate cases is among the older demographic.

The sample suggests that the new infections that have been rising rapidly in Florida for the past several weeks are disproportionately among age groups least at risk of serious illness from the virus.

That’s generally encouraging news, given that seniors are prone to the worst outcomes from COVID-19.

It may help explain why, despite a spike in new infections, there has not yet been a spike in hospitalizations and deaths. Those increases might yet occur as infection rates rise, but there also is reason for optimism.

Daily hospitalizations have risen throughout the month of June, but remain only slightly above previous peaks reached in April and May. Daily fatalities remain substantially below the peaks hit during May. If new cases are trending younger, there’s reason to hope that these rates won’t spike, although it’s far too soon to tell.

The potential good news should be met with caution. The volume of cases reported over the past several weeks is much higher than it was earlier in the pandemic. Even if seniors make up only 10% of new cases, as the sample suggests, that percentage must be applied to very large numbers of new cases.

In short, a spike in hospitalizations and deaths remains a real possibility in Florida, but the age profile of newly infected patients gives some cause for hope.