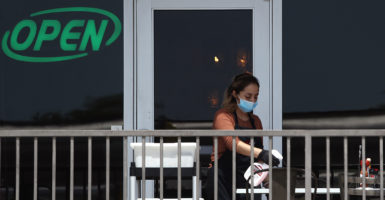 Come Friday in Texas, the nation’s second-largest economy, businesses such as restaurants and retail stores will be open again, but at a 25% occupancy rate. After that, public health officials will reevaluate the data and decide whether to allow a 50% occupancy rate.

The Lone Star State is among nine states where governors’ stay-at-home orders expire at the end of Thursday, allowing for a gradual reopening of their economies, according to Pew Research Center’s Stateline, which monitors state governments.

“If we go back to work and there is no increase [in COVID-19 cases], people could become complacent about social distancing and think it’s not dangerous,” Amy Anderson, a registered nurse in Texas, told The Daily Signal. “It’s important to maintain our vigilance.”

Anderson noted that business owners likely will continue to be responsible, since they face a fine of up to $1,000 and even jail time for not complying with government restrictions. Plus, most businesses are licensed by state and local governments.

Various states have different rules for reentry, but most are in line with the guidance by the White House coronavirus task force, said Anderson, co-founder of the Global Nurse Consultants Alliance and an assistant professor at the School of Nursing and School of Medicine at Texas Christian University.

“I don’t think we have a real choice but to open the doors up. My concern is demand won’t be high enough,” Ortiz told The Daily Signal in a phone interview. “If we wait for the unattainable goal of zero cases of COVID-19, the economy would be closed for months and you would see an increase in depressions and suicides.”

The other states besides Texas where stay-at-home orders were set to expire Thursday are Alabama, Arizona, Idaho, Maine, Nevada, Tennessee, West Virginia, and Florida, where some beaches already have reopened.

On Friday, stay-at-home orders in Indiana, Ohio, and Utah are set to expire, meaning some businesses will reopen Saturday.

“In Florida, it hit the Miami-Dade County area worst,” Dr. Lee Gross, who practices family medicine in North Port, Florida, said of COVID-19, the disease caused by the new coronavirus.

“In general, in population centers now, we are seeing a decline, while in rural areas, we are seeing a steady increase,” Gross, also president of the advocacy group Docs 4 Patient Care, said.

“Here in Charlotte County, the beaches are opened and people are still standing 6 feet apart, but they seem packed,” Gross added during a phone interview with The Daily Signal.

“Salons could be safe if there is a determined amount of people allowed in and a way to be responsible,” Gross said. “Outdoor venues are generally safer than indoor venues. But, you don’t want kids climbing around on monkey bars.”

President Donald Trump criticized Kemp, a fellow Republican, for his decision to reopen without following the White House guidelines. However, Trump did not criticize Polis, a Democrat.

“Government guidance is just that, guidance. It’s not a proclamation or law,” Gross said. “States should take guidance into consideration.”

“If states are less draconian and trust people, they will likely get better cooperation longer, rather than revolt in protest,” Pham said. “It is a risk to reopen, but if you don’t reopen, there are other risks. Life and livelihood are connected to one another.”

Pham also looked at the realistic outcomes from reopening, positive and negative.

“The worst-case scenario is a huge spike in [COVID-19] cases and hospitalizations and all the gains that were made from the mitigation efforts will be wiped out, the need for personal protective equipment will skyrocket again, and we’ll have crisis care that will require more ventilators,” Pham said.

“The best-case scenario is that we will have a gradual and deliberate reopening with continued social distancing, and we’ll see a lower spread rate,” Pham added.

Other states that are ready to drop their stay-at-home orders logged varying rates of death from COVID-19.

Of the states slated to begin reopening gradually after Friday, Indiana had 138.4 deaths per million; Ohio had 68.4; and Utah, 14, according to the RealClearPolitics tracker.

Next week, the states of Kansas, Minnesota, Missouri, North Carolina, Pennsylvania, and Rhode Island will begin to reopen, according to Pew’s Stateline.

The state with the largest number of deaths and highest death rate was New York, where 22,806 have died, a rate of 1,175.4 per million.

The Empire State’s stay-at-home order is set to expire May 15. That’s the same day as Delaware, Louisiana, Michigan, New Mexico, Vermont, and the District of Columbia are set to drop their stay-at-home orders.

In Connecticut, with the third-highest death rate in the nation at 564.3 per million, the stay-at-home order is set to expire May 20. Illinois and Hawaii are slated to open May 30 and 31, respectively.

As of now, Virginia will reopen June 10. In seven other states, according to Pew, no dates are set for stay-at-home orders to expire.

Another eight states had no stay-at-home orders: Arkansas, Iowa, Nebraska, North Dakota, South Dakota, Oklahoma, Utah, and Wyoming. In most of these cases, the states issued guidance and local governments and businesses were free to take action.