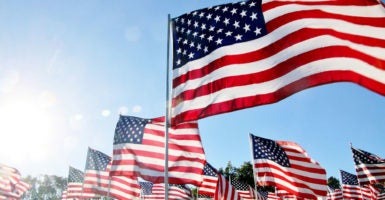 Independence Day in 2020 will have great meaning to many Americans.

As we’ve seen many symbols of America’s past get literally smashed by mobs, it’s important for those who still love their country to reflect on why it is exceptional and worth fighting for.

America has always been great and can be greater still.

This is certainly not an exhaustive list of why America is great, of which there are almost countless examples big and small.

But these examples are more unique to America, unique to why America rose from nothing to become the world’s preeminent superpower in such a short amount of time.

1. A Culture of Self-Government

Americans, even before the birth of the United States in 1776, have always been a self-governing people. One of the first orders of business for the Pilgrim settlers when they arrived on the shores of Massachusetts was to create the Mayflower Compact, a basic statement of self-government and loyalty to the British crown.

The Jamestown colony in Virginia set up the House of Burgesses in 1619, the first legislative assembly in the New World.

Following their heritage, the British colonies in America almost immediately established institutions of self-government where community participation in the creation and upholding of laws was extensive.

But in the almost two centuries between the arrival of British colonists in America and the American Revolution, the colonists’ attachment to self-government deepened in comparison to their cousins back in England, where representation was often more symbolic rather than actual.

Amid Parliament’s ultimately foolish attempts to ham-handedly rein in the colonies at the end of the French and Indian War, it was the Crown that triggered the separation, the drive for total independence.

The thought of losing their grip on self-government made the colonists believe that they would soon end up in the vice of absolute tyranny. After years of discontent and pleading with British authorities to loosen their grip of control, the colonies rebelled.

The Declaration of Independence, a remarkable and timeless document, did not just lay out the essential God-given rights of life, liberty, and the pursuit of happiness in its most famous lines.

It also lays out the blow by blow steps of the British government and the colonies to establish that it was not just the rights of the colonists that had been violated, but that the very tools of self-government that could have rectified the situation had been arbitrarily stripped from them.

Americans were a people fitted for liberty and would tolerate no less.

2. The Constitution and the Rule of Law

When the Founding Fathers set about creating our own system of government, they codified the principles of self-government to serve countless generations unborn.

After the false start, so to speak, of the Articles of Confederation, the Framers wrote, and the American people ratified, the Constitution of the United States.

This remarkable document created a framework of America’s federal system that lasts still today despite the countless societal changes that have occurred in the last two centuries.

And while, in many ways, that constitutional and federal system has been eroded over time, Americans have remained committed to the idea of the Constitution as the glue that defines our government and binds Americans under a single system with many parts.

This is the cornerstone of liberty and order that defines our republic, ensures that we have an energetic but ultimately limited government.

Certainly, other nations have codified their laws and created founding documents of many stripes, but none matches the enduring legacy of the Constitution of the United States.

The American civilization may be young, but our system of government is quite old, and has excelled through the test of time.

Self-government and the Constitution have made America strong and adaptable to changing circumstances. Just as importantly, they’ve created a system whereby the average person can thrive and prosper.

The country’s strength lies in the millions of free-born, self-governing, and self-sufficient people who have taken the protections our unique government provides and created the most wealthy and prosperous nation in human history.

Americans are, and have always been, an enterprising people. But more than just create wealth, we have used our wealth and prosperity.

America’s attachment to the rule of law and defense of private property has allowed the growth of an expansive middle-class.

Yes, America has produced many titans of industry, but the real source of our strength is the fact that the average American has had opportunities to generate wealth and prosperity and create a vibrant civil society.

Many homesteaders went West to get rich, but many more went West to build families and ensure that their children would have a better life than they had.

That’s the spirit of America.

We have used our tremendous resources not only to improve our own lives but the lives of others.

And because of our enormous prosperity Americans remain, by far, the most generous people on Earth.

This Fourth of July, as with every Independence Day, we should be thankful and grateful to be Americans, we should be proud of what our country—though imperfect as all of mankind is imperfect—has accomplished.

It is important and essential that at this time we remember, defend, and pass on what has made this country great.