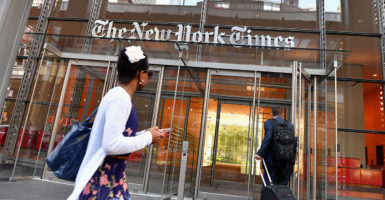 People walk past The New York Times building in New York. Nikole Hannah-Jones, lead editor of the Times’ controversial “1619 Project,” responded to a critical New York Post op-ed column as though it was a compliment. (Photo: Angela Weiss/AFP/Getty Images)

After a New York Post op-ed essay, “Call Them the 1619 Riots,” linked rioting occurring in cities  across the country to The New York Times’ controversial “1619 Project,” the journalist behind the project responded, “It would be an honor. Thank you.”

The tweet by Nikole Hannah-Jones was subsequently deleted, without explanation. The New York Times did not respond to a request for comment by The Daily Signal on whether the tweet reflected the Times’ values.

“It comes as no surprise that the people behind the 1619 Project are ‘honored’ by mob violence carried out under their banner,” Joseph Loconte, director of the Simon Center for American Studies at The Heritage Foundation, told The Daily Signal in an email on Monday.

The significance and history of 1619 have been made more widely known by the 1619 Project, which consists of a podcast, essays, and other written materials. It was released in 2019 to commemorate the 400th anniversary of the arrival of the first slave ship on the coast of Virginia. The project was awarded a Pulitzer Prize in May despite its issuing corrections to major historical errors.

Jonathan Butcher, a senior policy analyst with The Heritage Foundation, wrote in March that the central mission of the 1619 Project is to convey the message that “American history began with slavery,” rather than in 1776 with the Declaration of Independence.

Their moral indifference to criminal behavior on our streets is matched by their detachment from historical realities, from our nation’s actual past. Both involve an abdication of moral responsibility—the obligation to think deeply, to engage the mind, as well as the heart, in an honest search for truth.

The feverish imagination of the conspiracy theorist is ill-suited to the historical task before us; that of illuminating for the American people the story of their flawed but noble experiment in democratic self-government.

Destructive rioting, with arson and looting, erupted in several American cities after the May 25 killing in Minneapolis of George Floyd in police custody.

On June 18, the day before the column ran in the Post, rioters pulled down a statue of Washington in Portland, Oregon, that dates back to the 1920s. Spray-painted on the side of the bronze sculpture was “1619,” the year the first slave ship arrived in America.

Andy Ngo, an independent journalist, reported from Portland that the statue “was brought down using rope, and a U.S. flag that was lit on fire can be seen burning over the statue.” He blamed Antifa, a radical left-wing, self-proclaimed anti-fascist group, for the statue’s destruction.

Ngo tweeted, “The vandalized monument has ‘1619’ & ‘white fragility’ written on it.”

Following Floyd’s death, rioters appear to have embraced the message of the Times’ project.

Rioters set fire to police stations and restaurants. Looters have ravaged shops from coast to coast. And now they’re coming for the statues—not just of Confederate generals, but the republic’s Founders, including George Washington, whose statue was torn down in Portland, Ore.

The tweet, posted Saturday morning, has since been deleted. The Daily Signal reached out The New York Times to ask whether Hannah-Jones’ tweet reflected the values of the newspaper, but received no response by the time of publication.

In a tweet Saturday, Hannah-Jones also addressed the toppling in San Francisco of a statue of Grant—the nation’s 18th president and who as a Civil War general led Union troops.

“I think maybe Grant’s is not a statue worth toppling,” Hannah-Jones tweeted. “But I also understand after decades of shrugs when people spoke of the hurt of having been demeaned by public tributes, of entering buildings, of walking past art that celebrated white supremacists, how overzealousness occurs.”