Remote Workers Could Get Surprise Tax Bills, but States Can Protect Them 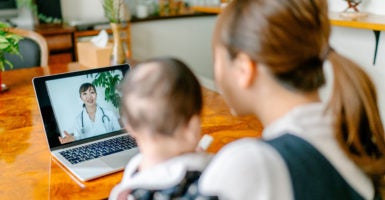 To narrow the chances of taxpayers having to temporarily comply with new tax laws, every state should issue clear guidance that pandemic-related remote work will be treated as in-office work for individual and business tax purposes. (Photo: recep-bg/Getty Images)

Other front-line workers have traveled to pandemic hot spots to help care for the sick and support the health care response. Still others are providing services, such as telemedicine, remotely.

These new work arrangements could ensnare unsuspecting individuals and businesses in new and complicated tax obligations.

A few states have helped to protect workers by issuing guidance that remote work during the pandemic will be considered in-office work for tax purposes.

However, because so few states have independently moved to protect taxpayers, Sen. John Thune, R-S.D., has proposed a federal bill that would limit states’ ability to tax the income of people temporarily working from a remote location during the pandemic and in the future.

Now is the time for states to step up and protect taxpayers. The federal government should focus on defining a physical presence test to protect businesses and clarifying the treatment of other online services, such as telemedicine.

New, pandemic-induced temporary remote work arrangements present a short-term problem, but highlight problems that will continue to cause expensive headaches for taxpayers in an increasingly mobile and online world.

To narrow the chances of taxpayers having to temporarily comply with new tax laws, every state should issue clear guidance that pandemic-related remote work will be treated as in-office work for individual and business tax purposes.

States should also make longer-term structural reforms to protect out-of-state workers in normal times by raising the threshold for having to pay income taxes.

If an individual works and earns income in a state, that state can require the worker to pay local income taxes. Many states create unnecessary headaches for transient taxpayers by starting to tax workers after just one day of earning income.

Business income taxes are also levied based on “nexus” rules, which determine where taxes are owed, and often include the location of employees, among other factors.

A remote worker who traveled to a new state for telework during the coronavirus pandemic could trigger both new personal income taxes and new business taxes for his or her employer.

Not properly complying with and documenting temporary telework arrangements have the potential to ensnare unsuspecting taxpayers in novel tax systems across multiple jurisdictions, opening them up to new liabilities in the midst of a national emergency.

The majority of states have not issued any guidance, or they have explicitly stated their intention to enforce existing laws. New York Gov. Andrew Cuomo, for instance, said that his state would continue to assess taxes on income from remote work earned while in the state.

If Cuomo stands by that commitment, nurses, doctors, and other first responders who traveled to New York could face new income taxes on the income they earned while helping sick New Yorkers.

Individuals in professions with regular travel, such as consultants and professional athletes, also have to manage the complexity of multiple tax jurisdictions in normal times.

By not applying taxes until someone has been in the state for a month, states and localities could simplify tax compliance for individuals and businesses in normal times and easily increase the threshold for this pandemic emergency.

There is also uncertainty for many doctors and hospitals around the sourcing rules for the treatment of income earned from telemedicine patient care.

Congress and state legislatures should clarify that the income from remote health care services should be sourced to the hospital or doctor’s office, to treat the income as though the visit was in-person so that the income does not register any novel tax liabilities.

In general, goods and services should be taxed based on location of the provider, rather than the destination of the consumer.

Similarly, many states require out-of-state businesses to collect the state’s sales taxes on goods sold to customers in the state, even if the business has no physical connection—or political recourse—in the customers’ states. This opens small businesses up to tax liabilities in thousands of far-flung sales tax jurisdictions.

The regulatory compliance and tax assessment risks from state sales tax collectors around the country were threatening to bankrupt many small retailers before the current crisis. The problem is even more pressing today.

Remote work, mobile workforces, online services, and interstate shipping all pose similar but distinct problems for taxpayers, especially as states look for new ways to squeeze more money out of a smaller economy.

Congress must define and protect a physical presence test for registering income and sales taxes, and states should take the lead to ensure temporary work from their state does not unintentionally trigger new tax obligations, especially in a pandemic.