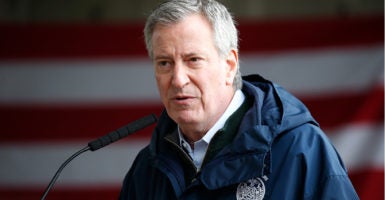 “We will be moving funding from the NYPD to youth initiatives and social services,” New York City Mayor Bill de Blasio says. Pictured: De Blasio speaks to the press as the USNS Comfort arrives at Pier 90 on March 30, 2020, in New York City. (Photo: John Lamparski/Getty Images

De Blasio’s plan is part of a suggestion from the mayor’s task force on racial inclusion, which is chaired by his wife, activist Chirlane McCray. Decisions about police funding must ensure New Yorkers’ safety is a priority, the mayor said during a press briefing.

“We will be moving funding from the NYPD to youth initiatives and social services,” de Blasio, a Democrat, said during the hourlong press conference Sunday addressing potential police reforms.

De Blasio’s announcement comes after he was booed during a vigil for George Floyd, a black man who died after a Minneapolis police officer kneeled down on his neck for more than eight minutes, video of the incident shows. “Defund the police” has become a common slogan among protesters and left-wing figures.

De Blasio added: “The details will be worked out in the budget process in the weeks ahead. But I want people to understand that we are committed to shifting resources to ensure that the focus is on our young people.”

“This is a beginning. I want it to be abundantly clear to all New Yorkers. These are first steps to what will be 18 months of making intense change in this city. The work of this task force is crucial,” de Blasio said. “This is a transformative moment.”

Street vendor enforcement will also “no longer be the responsibility of the NYPD,” de Blasio added during the briefing. A civilian agency will now be responsible for policing citizens’ interactions with city vendors, he said without mentioning the agency.

Floyd’s death sparked nationwide protests, and resulted in second-degree murder and manslaughter charges being brought against the police officer, Derek Chauvin, who was immediately fired after the incident. The NYPD arrested hundreds of protesters, rioters, and looters during the protests in New York City.

A campaign emerged after Floyd’s death to reduce police department funds across the country and redirect such resources to other services.