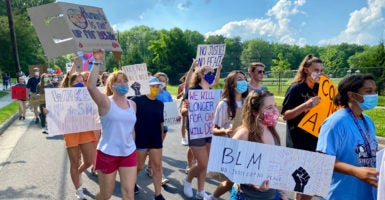 As thousands of protesters marched through the streets of Washington, D.C., on Saturday, three high school students were organizing a rally of their own in a quiet Virginia neighborhood of Fairfax County.

The dinnertime march drew more than 150 participants, many carrying signs demanding justice and remembering George Floyd and Breonna Taylor, two black Americans whose deaths have sparked a nationwide backlash against police brutality and led to protests and looting in major cities.

On a balmy Saturday afternoon, the rising high school seniors gathered in the parking lot of Heritage Presbyterian Church, surprised by the turnout of neighbors.

“Especially in this neighborhood,” said Bell Andrzejuk, 17. “It’s primarily a white neighborhood, and a lot of things we’re seeing on signs is that white silence condones violence. In this climate, it is white people who need to be as frustrated and angry as black Americans.”

“The first day, it was a couple of kids from my school. The second day, I posted, ‘Hey, we did this. Please join us.’ We had 30 people. The day after that, I posted, ‘Hey, we’re doing this. It’s going to go great.’ And 50 people came,” Maddox said. “We’re making sure that black lives matter, and that’s our whole goal.”

After a week of demonstrations, the students wanted to do something bigger. They used social media to spread the word to local residents.

“We weren’t expecting this big of a crowd today,” said Kulinski, adding:

We’re going to see how it goes, and hopefully, we’ll get people to join us throughout the neighborhood and get people’s attention. We plan on having more protests next week.

Another idea we had is also a carwash. That’s still in the works, but it’s something where all the money that we make could go toward donations. And we could educate people.

Maddox, who led the marchers with a bullhorn, began the protest by asking the Rev. Rob Erickson to offer a prayer. Heritage Presbyterian was not officially involved, but Erickson turned out to offer water and to welcome those gathered in the church’s parking lot.

In their social media posts, Maddox and the other organizers stressed the peaceful nature of their efforts.

“We’re really trying to enforce the peaceful part of this because, no, we don’t want to cause any harm to our neighborhood,” Maddox said. “At the same time, we really want to make a difference.”

The neighborhood, which abuts the Potomac River and is about 15 miles south of the White House, is more accustomed to an annual Independence Day parade and Thanksgiving turkey trot than a protest march.

Maddox said the protests are giving students and neighborhood residents the opportunity to make their voices heard, particularly amid social distancing restrictions due to COVID-19.

“We decided to have something here in this suburban area and do something for the people who can’t go to D.C.,” Maddox said. “We might as well just make our statement here; still be heard in a way, while remaining peaceful and not engaging in riots.”

Andrzejuk said it was particularly encouraging to see so many young people turn out for Saturday’s march.

“I feel like our generation, Gen Z, we were the ones to really push this farther and say, ‘No, we’re not having this. Boomers step down, it’s our time to shine,’” she said, adding:

And to see that even kids who are 6, 7, 8 are starting to understand what is going on in America, beyond their video games, their elementary school, is really inspiring.

It is what’s going to fuel the next generation of young leaders.