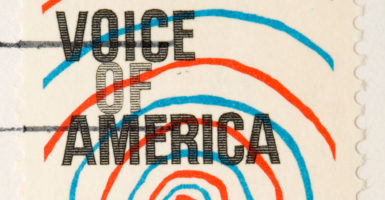 The Senate recently confirmed Michael Pack as the new chief executive officer of the U.S. Agency for Global Media, which oversees Voice of America. Pictured: A detail from a 1967 stamp commemorating Voice of America. (Photo: Kropewnicki/Getty Images)

After a delay of two years, on Thursday the U.S. Senate confirmed Michael Pack as the new chief executive officer of the U.S. Agency for Global Media, which oversees Voice of America. About time!

Pack’s confirmation follows a period of unconscionable delay, strategizing, and obstructionism by Democratic members of the Senate Foreign Relations Committee. He and his family have been in limbo for much too long.

This behavior culminated in a lengthy rant by Sen. Robert Menendez, D-N.J., who has been a key member of the opposition, and who recently demanded a delay of the vote because of an official investigation of Pack’s finances that Menendez himself had instigated the day before.

Despite this, Senate Majority Leader Mitch McConnell, R-Ky., eventually moved the nomination, pressured by the White House. The final vote came in at 53-38, with Sen. Joe Manchin, D-W.Va., voting with the Republicans.

Why was Pack’s nomination to lead the $700 million agency that oversees U.S. civilian media and communication assets so controversial? The fact is that even though Pack is well-qualified for the post, anti-Trump media forces have fanned the flames with scare-mongering, speculation, and very few facts.

This opposition includes some inside the U.S. Agency for Global Media who have powerful allies among the so-called mainstream media. The oft-repeated, but unsubstantiated allegation is that Pack will turn the agenda into a propaganda shop for the Trump administration.

There is bipartisan recognition of the need to reform the U.S. international broadcasting complex. In 2013, then-Secretary of State Hillary Clinton told a House Foreign Affairs Committee hearing, “The Broadcasting Board of Governors is practically defunct in terms of its capability to be able to tell a message around the world.”

It was President Barack Obama who signed into law the legislation that created the CEO position, for which Pack was just confirmed. This bill also disbanded the nine-member board that had been acting as a dysfunctional collective executive of the agency.

Allegations have arisen that President Donald Trump disbanded the board. No, Obama did, and did so because it wasn’t working. To his credit, Obama laid the groundwork for a more streamlined and better functioning broadcasting agency.

A number of challenges face Pack as he moves into his new position. As written into law, he will be supported by a four-member board with only advisory powers. For years, the agency has been plagued by scandals and bad management. Accountability needs to be restored.

Journalistic standards and respect for the mission outlined in the agency’s charter also have to be elevated. The agency is supposed to serve audiences around the world with objective and accurate reporting.

“The whole agency rests on the belief the reporters are independent, that no political influence is telling them how to report the news and what to say,” Pack stated at his hearing. “Without that trust, I think, the agency is completely undermined.”

Yet at the same time, the agency is also mandated to fairly present U.S. policy and discussion of the same. That second part of its mission often meets with entrenched opposition from the agency’s journalistic staff.

Beyond that, there is a question of personnel changes, which Pack will have the right and responsibility to make in order to improve the agency. Such changes will almost certainly be portrayed in the media as resulting from ideological motivations.

Michael Pack has a long track record as a professional and experienced media executive, with a background that spans the Broadcasting Board of Governors (as the U.S. Agency for Global Media used to be called) and National Public Radio. He can be trusted to make good and reasonable choices.