Scientists Are Studying Hydroxychloroquine as a Preventative Drug for COVID-19 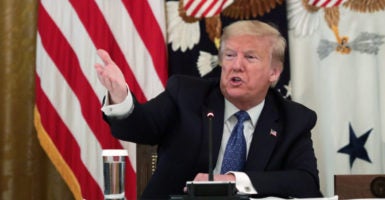 President Trump, pictured during a Cabinet meeting on May 19, recently announced he is taking hydroxychloroquine as a preventative measure against COVID-19. (Photo: Alex Wong/Getty Images)

President Donald Trump is again at the center of another hydroxychloroquine controversy after he disclosed earlier in the week that he has been taking the drug as prophylaxis in a manner being investigated for use by front-line health care workers.

Media outlets and left-wing politicians predictably have been quick to criticize the president for that, with House Speaker Nancy Pelosi feigning concern that the drug might be harmful to him because of his “age group” and his “weight group,” calling the president “morbidly obese.”

Neither of those are particular risk factors for potential side effects of hydroxychloroquine.

Former Vice President Joe Biden offered his opinion, saying, “[T]his is absolutely irresponsible. There’s no serious medical personnel out there saying to use that drug.” Biden also said that taking hydroxychloroquine was “like saying maybe if you injected Clorox into your blood, maybe it’ll cure you.”

Biden seems very concerned about the president possibly misleading people by example, causing them to poison themselves with hydroxychloroquine. As a prescription drug with zero recreational purpose, it would be very difficult for the average American to obtain a course of it from either the pharmacy or from the nonexistent black market.

The bigger concern, if taking hydroxychloroquine is truly akin to injecting Clorox, is that New York state had obtained tens of thousands of doses specifically for use on patients with COVID-19.

New York Gov. Andrew Cuomo might be to blame for some tragic failings in his state’s pandemic response, but the mass poisoning of New Yorkers by hydroxychloroquine is not one of them.

Hydroxychloroquine is a generally well-tolerated drug that has been in use for decades against malaria. It is related to quinine, which is a bark extract that has been used as an antimalarial drug for centuries.

Recent uses, especially where malaria is not endemic, include for rheumatological conditions such as rheumatoid arthritis or lupus. As of 2017, more than 5.6 million prescriptions were written for it.

That’s not to say that hydroxychloroquine is benign. (There are no benign drugs.) The most common side effect is what’s called “QT prolongation,” which is when the electrical signals that coordinate heart rhythms begin to slow down and take more time to complete. That’s a potentially dangerous situation that can predispose a patient to arrhythmias.

And that side effect is very well-known. There isn’t a single physician, and certainly not the president’s, who would write a prescription for hydroxychloroquine without a close eye on the patient’s heart health, or on any of the other potential side effects.

Furthermore, the president is frequently surrounded by the highly qualified physicians who make up the White House’s Coronavirus Task Force and who undoubtedly are taking a keen interest in the president’s drug regimen.

That’s a long way of saying that the president is probably going to be OK while taking this drug.

But will he benefit? That’s a more difficult question to answer.

Much of the early excitement was based on a French study that found that patients treated with a combination of hydroxychloroquine and azithromycin, a commonly used and widely available antibiotic, were able to clear the virus from their systems earlier than comparable patients who were given neither hydroxychloroquine, nor the combination.

A different study in the United Arab Emirates found the opposite—that patients treated with hydroxychloroquine took longer to test negative for the virus.

Both of these studies were relatively small, with fewer than 100 patients involved in each. Many similar studies have been conducted around the world with hydroxychloroquine, either alone or in combination with other drugs, and the results were generally mixed.

One group of researchers based in India reviewed 11 studies that accounted for the results of 4,306 patients, some of whom did not receive the drug to act as a control group. In this meta-analysis, hydroxychloroquine did not seem to provide any benefit to COVID-19 recovery.

However, that review did not include a somewhat promising new study from New York that found that, among patients who were not admitted to the intensive care unit, the addition of supplemental zinc to the combination of hydroxychloroquine and azithromycin was associated with less mortality.

The same trend was present in patients who were admitted to the ICU, but the finding was not statistically significant.

The verdict is still out on the efficacy of hydroxychloroquine on patients with COVID-19, with the body of research largely ambivalent on its use. Without the results from studies on its prophylactic use, it will be impossible to tell whether the president is benefiting from it, but he might.

The health care workers who are currently in the prophylaxis study may benefit from it. Or some will and others won’t, or none will. Those are all open questions at this time, and politicizing its use in the middle of the pandemic is only going to be detrimental to the cause of public health.

If politicians continue to insist on demagoguing questions of public health, including about the use of a potentially beneficial drug, they ultimately will subject the public’s health not to critical health findings and medical evidence, but to the angry whims of partisans and politicos.