How to Hold Beijing Accountable for COVID-19? Here’s 3 Rules to Keep in Mind 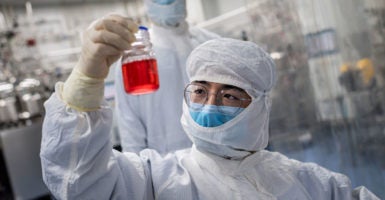 The ongoing competition between the U.S. and China cannot be resolved quickly. This is a marathon, not a sprint. PIctured: An engineer looks at monkey kidney cells as he makes a test on an experimental COVID-19 vaccine inside a laboratory at the Sinovac Biotech facilities in Beijing on April 29, 2020. (Photo: Nicolas Asfour/AFP/Getty Images)

Around the world, a lot of folks are itching to retaliate against China for its complicity in launching the coronavirus pandemic. But a thirst for vengeance seldom leads one to the wisest course of action. Revenge, after all, is a dish best served cold—or at least without the heat of passion.

The ongoing competition between the U.S. and China cannot be resolved quickly. This is a marathon, not a sprint, and there are special rules for this kind of contest. Washington needs to follow them if it wants to win.

Long-term competitions are long for a reason: neither side has a decisive advantage over the other.

Sparta had a great army, but it wasn’t much use against the Athenian navy—and that went for the other way round. The two city-states butted heads for 40 years. England and France fought for 100 years, because neither side had a good solution for bridging the channel. Neither Protestants nor Catholics could muster a majority in the Thirty Years’ War.

When neither side holds a decisive edge, conflicts can settle into wars of attrition, with the winner emerging at long last, barely standing. But there are exceptions to this debilitating outcome.

Consider the Cold War. The U.S. and its allies emerged at the end stronger and richer—and just as free—as when it started. The free world won by adopting strategies that emphasized protecting our key competitive advantages as much as going after the other side.

Investing in the Marshall Plan to rebuild the economy of the transatlantic community was every bit as important as fielding an army to defend against a Soviet invasion. In this manner, the West grew more powerful over time as the Soviets strained to keep up.

Today, China challenges the West. Beijing has speedily amassed power in part because we let them cut into our competitive advantages. The Chinese Communist Party ran amok through global free markets, lying, cheating, and stealing their way to the top.

If the free world wants to stay on top and mitigate the threat of Beijing’s global destabilizing behavior, we are going to have to work both sides of the problem—pushing back on China and protecting our core competitive advantages.

What has kept the West from becoming a suburb of Beijing so far is that we are free. We can defend ourselves. We are affluent. If we lose those decisive advantages, we become little more than a speed bump to the party’s ambitions.

This leads to the three rules we must follow when it comes to getting back at Beijing for the COVID-19 outbreak and its many other misdeeds.

Job one for America, its allies, and partners is to get our economies safely up and running. If we can’t do that—nothing else matters. We will be faced with the worst depression in modern history. If memory serves, the last one didn’t go so well and was capped with a cataclysmic world war.

So, the first rule is that no major action against China should interfere with rebooting the U.S. economy and the U.S. leading the free world in economic recovery. Let’s get everybody back to work first.

2. Getting the Bad Guy’s Attention Is More Important Than Making Yourself Feel Better.

Toilet-papering your ex’s car might lead to some self-satisfaction, but it won’t change his cheating heart. The only steps worth taking against Beijing are those that will actually make it sweat.

Case in point: To deal with the growing debt, some want to gut defense spending. If Washington slashes our capacity to defend U.S. interests, that will send the wrong message to Beijing—a message far stronger than insisting aspirin be made in America.

China isn’t going anywhere. Neither are we. Let’s give it challenges that it will face for the long haul. Perhaps this won’t be as satisfying as a slap in the face, but such measures are much more likely to get Beijing’s attention, mitigate threats, and perhaps change the party’s behavior.

The best way to serve up revenge? With policies that both weaken the advantages of the Chinese Communist Party and safeguard the freedom, prosperity, and security of the free world. That’s how we keep the strength needed to finish the marathon first and in good shape for the next race.