Remembrances and Reflections on the 75th Anniversary of V-E Day 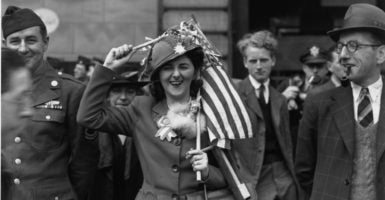 May 8 marks the 75th anniversary of Victory in Europe Day, also known as V-E Day.

In England, they commemorated the solemn event with two minutes of silence across the country.

In London, the Red Arrows, a British military flying squadron, flew over the capital city to honor the moment. Watching the Red Arrows immediately took me back to May 8, 1995, the 50th anniversary of V-E Day, when I was a young naval officer stationed in London at the U.S. naval headquarters in Europe during the celebration.

As the son of a World War II vet, I had heard stories about the war from my father since I was a child. My dad, Douglas Joseph Stimson, enlisted in the Navy at the age of 17, like so many of his peers. He wanted to do his duty and fight for his country.

He served aboard ships in the Pacific, mostly transporting Marines from one place to another. One of his ships, while at anchor, was attacked by kamikazes, and almost sank. He didn’t want to talk about the details, but always said, “War is hell, son. I hope you never see war in your lifetime.”

He—like so many others of the Greatest Generation—was stoic, humble, and mindful of tradition. He earned my respect, and as I became educated, I learned to admire and deeply revere those who had served during the war.

When I got my commission in 1992, my dad was proud. But my mom was scared, because she was born in 1919 and had seen too many young men go off to war and never come home.

It’s hard to fathom, but more than 15 million military personnel and 45 million civilians died in World War II. My parents, both of whom are now gone, knew full well that wars killed people and shaped history, and that the possibility of war was real, even in 1992.

When I finally got my orders, my dad insisted that he accompany me to my first duty station. So, in 1993, we drove from Maryland all the way to Naval Station San Diego. As it turns out, 47 years earlier, as he was getting out of the Navy, he lived on the same base before heading north on a train back home to Seattle.

When we got on base, he wanted to see if his old barracks were still standing. And sure enough, they were still there, but they had been converted into the courthouse where, ironically, I would work for the next two years.

I’ll never forget the look in his eyes as he stood there, staring at his old barracks. It was as if he were looking right through the building.

Two years later, I was stationed at the U.S. naval headquarters in London. As a young lieutenant, with only two years of naval service under my belt, I didn’t know much, but I did know—thanks to my dad—about the Greatest Generation, and knew that the upcoming 50th anniversary of V-E Day was something I wanted to be part of.

On May 8, 1995, the 50th anniversary, I got up early, because I wanted to get a good spot near the main stage in Hyde Park. Dignitaries, including some members of the Royal Family, were going to be there, and I wanted to see them. Across town, there were other festivities in front of Buckingham Palace, as you can see in this video.

As I remember it, there wasn’t a cloud in the sky, and it was warm. Getting up early paid off. I showed my military ID card to someone, who let me into an area near the main stage.

Over the next hour or two, dozens of older British men filed into the enclosure. Each wore khaki or gray slacks, blue blazers and a tie, and each had his military ribbons displayed on the left lapel of his sport coat. Eventually, I found myself in a sea of former British military men. They spoke in hushed tones to each other, as we all waited for the official ceremonies.

Those ceremonies included a number of memorable events, including remarks by then-Prime Minister John Major and the Queen; the singing of many songs, such as “God Save the Queen”; and a flyover of vintage World War II aircraft. Each can be seen in videos, here and here.

But what I’ll remember forever was what happened during the two minutes of silence.

Patriotic songs had been sung. Dignitaries had spoken. The flyover of British, German, and American vintage planes reminded us of both the beauty and horrors of war. Prayers had taken place.

And then the nation fell quiet, for two minutes. Traffic stopped.

The million-plus crowded into Hyde Park bowed their heads, and so did I.

At first, I didn’t know what the sound was. It was muted and soft.

Standing shoulder to shoulder with those men, I felt it. A slight movement. And then a sniffle. I turned my head sideways slightly, and realized what I was hearing.

They were crying—silently, stoically, privately.

I looked at the man to my right, his eyes moist, staring ahead, like my dad had two years earlier.

I could hear their muffled sobs and feel the pangs of their collective loss, and I remember it to this day.

As we celebrate the 75th anniversary of V-E Day, it’s important to remember the sacrifices that others made so that we can enjoy the freedoms we have to this day. Millions made the ultimate sacrifice for you and me, and for that, we can never thank them or their families enough.

So, as we carry on through this current challenge, we should pause to think about how the world is a better place because of victory over the forces of evil, and pray that we never have such a war again.