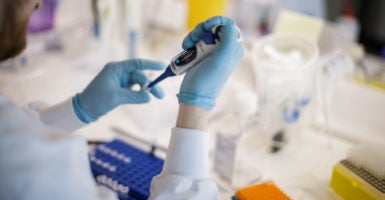 A researcher works on a vaccine against the coronavirus at the Copenhagen University's research lab in Copenhagen, Denmark, on March 23, 2020. (Photo: Thibault Savary / AFP/Getty Images)

The European Union organized a teleconference earlier this week to solicit pledges of funds to support efforts to develop and produce a COVID-19 vaccine.

The effort raised $8.1 billion in pledges, mostly from “around 40 countries, the U.N., research institutes, and philanthropic bodies, including the Bill and Melinda Gates Foundation,” according to the Agence France-Presse news agency.

Instead of lauding the effort, however, most media coverage seemed more interested in criticizing the U.S. for not participating.

That’s a prime example of style over substance, which sadly dominates the modern media.

The U.S. government is, by far, the most generous provider of humanitarian and health assistance in the world, as the U.S. Agency for International Development has noted:

Our country continues to be the single largest health and humanitarian donor for both long-term development and capacity-building efforts with partners, and emergency-response efforts in the face of recurrent crises.

This commitment extends to the current response to COVID-19.

As noted by the State Department, even as it struggles to arrest the COVID-19 outbreak domestically, the U.S. government has provided more than $900 million in health, humanitarian, and economic assistance to more than 120 countries around the world to help them deal with their own outbreaks.

According to the Hudson Institute’s Index of Global Philanthropy and Remittances, the Organization for Economic Cooperation and Development donor countries gave a total of $137.2 billion in development assistance in 2014. The U.S. government topped the list of donors with $33.1 billion of that total.

During the current crisis, private American businesses, nonprofits, charities, and individuals have provided nearly $4 billion in donations and assistance.

As noted by the State Department, “All together, Americans have provided nearly $6.5 billion in government and nongovernment assistance and donations to the global COVID-19 response, accounting for nearly 60% of global totals.”

Moreover, the State Department added, the U.S. is supporting development of a vaccine: “In addition to long-standing investments in research, the U.S. government has spent more than $1 billion developing COVID-19 vaccines in partnership with the U.S. pharmaceutical industry and international stakeholders.”

Does it really matter to those being helped by U.S. generosity that all of this money was not pledged at the European Union teleconference? In a word, no.

The U.S. commitment to helping combat COVID-19 leads the world, but the media would rather focus on how the U.S. advertises that commitment.

The media coverage in this instance reveals yet again what most interests too many reporters; namely, making political points.