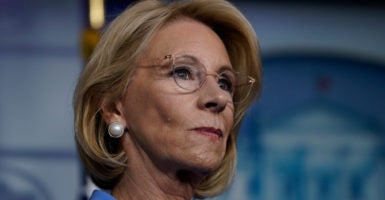 The Education Department secretary applauded Stanford’s actions in the wake of a Daily Caller News Foundation report Tuesday showing that all eight Ivy League schools are slated to receive millions in taxpayer-funded coronavirus stimulus money despite controlling endowments with a combined value in 2019 of more than $140 billion.

“Kudos to @Stanford for withdrawing its application for #CARESAct funds,” DeVos said. “As I’ve said since day 1, wealthy institutions like @Harvard don’t need this money. They should follow Stanford’s lead & embrace the @ShakeShack principle — leave the $$ for those with the greatest need!”

DeVos’ comments came after President Donald Trump remarked Tuesday at the White House that Harvard University should return the funds it received as coronavirus-relief aid, pointing out that Harvard has one of the largest endowments in the world.

Trump signed the CARES Act into law in March, legislation that will provide nearly $14 billion in relief funding to more than 5,000 universities across the United States, according to the Education Department.

The funds will be distributed through a formula set by Congress based on the number of Pell Grant recipients at each school, as well as the schools’ total student enrollment. The formula does not take into account a school’s financial health.

Harvard did not respond to a request for comment from the Daily Caller News Foundation.

UPDATE: Harvard announced in a statement released late Wednesday it would no longer take the government funding from the CARES Act.