Can the President Adjourn Congress and Make Appointments Without Senate Confirmation? 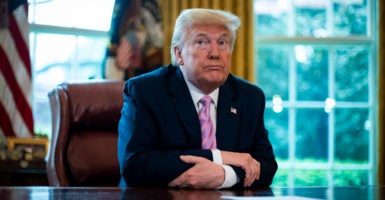 “The current practice of leaving town while conducting phony pro forma sessions is a dereliction of duty that the American people cannot afford during this crisis,” President Donald Trump says. Pictured: The president pauses before a clergyman prays an Easter blessing April 10 in the Oval Office. (Photo: Al Drago/Pool/Getty Images)

President Donald Trump expressed frustration Wednesday that the Senate has not confirmed his pending nominees to various posts.

“The current practice of leaving town while conducting phony pro forma sessions is a dereliction of duty that the American people cannot afford during this crisis,” Trump told reporters.

The president warned that if the House does not agree to let the Senate adjourn, then he would “exercise my constitutional authority to adjourn both chambers of Congress” and make recess appointments for more than 100 pending nominees, especially those related to the handling of the COVID-19 pandemic and its economic aftermath.

This raises an interesting question: Does the president have the power to adjourn the Senate and then make recess appointments?

The answer is “maybe,” if the circumstances fit the relevant provision of the Constitution cited by Trump: the Adjournment Clause in Section 3, Article II.

First of all, the Constitution does allow the president to temporarily fill what it calls “Vacancies that may happen during the Recess of the Senate” without Senate approval. Trump could do that if the Senate was in a single extended recess—if it was adjourned.

But it’s not. Because of a quirky constitutional provision, the Senate actually has been in a series of short, three-day recesses set to end May 3.

In 2014, the Supreme Court said in NLRB v. Noel Canning that three days is not long enough to allow the president to make recess appointments. The high court held that a Senate recess or adjournment has to be at least 10 days before the president may do so.

The Adjournment Clause says that the president “may, on extraordinary Occasions, convene both Houses, or either of them, and in case of Disagreement between them, with Respect to the Time of Adjournment, he may adjourn them to such Time as he shall think proper.”

Article I, Section 5 of the Constitution requires the permission of the other house when one of the two chambers wants to “adjourn for more than three days.”

The Democrat-controlled House refuses to give that permission, forcing the Senate to hold pro forma sessions in which nothing happens other than one senator gaveling in the Senate and gaveling it back out. The lawmakers conduct no business and confirm no pending nominations.

What the president cannot do on his own is override the pro forma sessions, declare that the Senate is not really in session, and then make recess appointments.

That is what the Noel Canning case was all about: President Barack Obama made recess appointments to the National Labor Relations Board during a pro forma session. The Supreme Court said that the Senate is in session when it says it is, provided that, under its own rules, it retains the capacity to transact Senate business. It is not up to the president to decide when the Senate is in session.

But if there were a disagreement between the Senate and the House on adjournment, could the president adjourn both houses and set a new time to convene? The answer to that is “yes.”

The Adjournment Clause actually was mentioned in the Noel Canning decision in discussions about the problems faced by a president whose nominations are stalled in the Senate. In his majority opinion, Justice Stephen Breyer cited the Adjournment Clause as the provision in the Constitution that “gives the President (if he has enough allies in Congress) a way to force a recess.”

In the concurring opinion written by Justice Antonin Scalia, joined by Chief Justice John Roberts and Justices Clarence Thomas and Samuel Alito, Scalia pointed out: “Members of the President’s party in Congress may be able to prevent the Senate from holding pro forma sessions with the necessary frequency, and if the House and Senate disagree, the President may able to adjourn both ‘to such Time as he shall think proper.’”

There wasn’t a single dissenting justice. So all nine justices of the Supreme Court agreed that the president could use the Adjournment Clause to force an adjournment long enough to make recess appointments, as long as there is a disagreement between the Senate and the House on when to adjourn.

For the president to use the Adjournment Clause to adjourn Congress for the 10 days needed to make recess appointments, there needs to be a formal disagreement between the Senate and the House. The Senate could pass a motion of adjournment for at least 10 days. Under Senate Rule 22, such a motion isn’t debatable, so it requires only a simple majority vote.

Thus, as long as Senate Majority Leader Mitch McConnell, R-Ky., could keep his caucus together, Minority Leader Chuck Schumer, D-N.Y., would not be able to filibuster the motion. There is also no doubt that Schumer would not agree to unanimous consent, so McConnell would have to call all of the senators back to Washington for a vote.

That approved adjournment then would need to be formally transmitted to the House. If Speaker Nancy Pelosi, D-Calif., refused to act on it, would that be considered a “Case of Disagreement” sufficient to satisfy the Adjournment Clause?

We don’t know, because this provision never has been invoked.

The president’s anger over all of this is understandable. The nomination process has been stymied by Senate Democrats for over three years, resulting in near gridlock for confirmations.

Senate Democrats have made sure that the two steps in the Senate’s approval process, ending debate and final confirmation, are as cumbersome as possible. Rather than informal cooperation, which has been the norm in the past, each step routinely has required a formal, time-consuming process unprecedented in Senate history.

During Obama’s first term, when Republicans were in the minority, the Senate had to take only 15 formal votes to end debate on executive branch nominations. In fact, the Senate took only 30 such votes during the first term of the previous nine presidents combined.

That was then, this is Trump. Since Trump took office 39 months ago, Democrats have forced the Senate to take 144 such cloture votes on his executive branch nominations, more than four times as many as the previous nine presidents.

Like ending debate, confirming a nomination can be done quickly or slowly. Unanimous consent or a voice vote do not require the presence of all senators and can take a minute or two.

If the minority refuses, however, the only option is a formal recorded vote that does require the presence of all senators and takes, on average, 35 minutes or more. The Senate took 173 recorded confirmation votes on executive branch nominations during the first term of the previous five presidents, Ronald Reagan through Obama.

So far, the Senate has been forced to take 179 recorded confirmation votes, and Trump’s four-year term has almost nine months to go.

And this outward example of the anti-Trump “resistance movement” has had another debilitating consequence: It has resulted in scores of qualified nominees pulling out of the process because of long delays and frustration, or otherwise good people declining to be nominated because it likely would not result in a confirmation.

The Democrats’ resistance tactics have hampered the work of the entire executive branch and also affected key agencies during the present coronavirus crisis.

In January, for example, Democrats forced the Senate to take a separate cloture vote on the nomination of Peter Gaynor to be administrator of the Federal Emergency Management Agency. Only eight senators voted against moving the nomination to a final vote.

A month earlier, Democrats forced the Senate to take a cloture vote on the nomination of Stephen Hahn to head the Food and Drug Administration, even though three-quarters of the Senate was ready to confirm him.

Trump probably is correct that he could use the Adjournment Clause of the Constitution to make recess appointments. But he can do that only if Republicans in the Senate help him by formally setting up a disagreement with the House on adjournment.

McConnell may be reluctant to set a precedent that could be used against Republicans in the future when they are in the minority in the Senate, and he might not have all of the votes he would need to do this.

But if the current crisis continues, a crisis that obviously hampers the work of the Senate, then Senate Republicans may want to seriously consider working with the president to use the Adjournment Clause to allow him to make recess appointments of needed personnel in key positions throughout the executive branch.