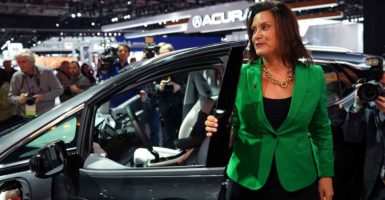 Michiganders are expressing their frustration with Gov. Gretchen Whitmer’s sweeping coronavirus stay-at-home orders, with protests and more than 200,000 people signing a petition for her to be removed from office.

“Take action in Lansing. Not on foot—stay in your vehicles,” reads a Facebook event post from the Michigan Conservative Coalition and the Michigan Freedom Fund urging Michiganders to protest Whitmer’s stay-at-home orders with a vehicle rally Wednesday in Lansing at the state Capitol.

The event has been dubbed “Operation Gridlock” and is being promoted with the slogan “She’s driving us out of business. We’re driving to Lansing.”

While the Facebook posting notes that participants must stay in their vehicles, it urges “every citizen, every business owner needs to get out of their house, out of their chair and get in their car, or truck, or anything that is legal to drive on taxpayer-funded roads … to Lansing to circle the Michigan Capitol Building at 100 N. Capitol Avenue at noon on April 15.”

Whitmer’s “stay home, stay safe” executive order, which was updated April 9, bans public and private gatherings among people outside of a single household.

It also mandates, according to a press release from Whitmer, that retailers control crowd sizes, with large stores having to restrict the number of customers at any one time to no more than four people for every 1,000 square feet of floor space, and that smaller stores must restrict capacity to 25% of the total occupancy limits.

In addition, large stores must “refrain from the advertising or promotion of goods that are not groceries, medical supplies, or items that are necessary to maintain the safety, sanitation, and basic operation of residences.” They also must close off areas of the stores that sell “carpet or flooring, furniture, garden centers and plant nurseries, and paint.”

She also banned residents visiting other homes, such as a neighbor’s residence and vacation homes.

The executive order states that, with limited exceptions, “all individuals currently living within the State of Michigan are ordered to stay at home or at their place of residence. … [A]ll public and private gatherings of any number of people occurring among persons not part of a single household are prohibited.”

Michiganders are doing more than taking to their cars on Wednesday to protest.

More than 200,000 people have signed a Change.org petition urging the recall of Whitmer, who was elected in 2018, in response to her handling of the COVID-19 pandemic.

“Recall Governor Whitmer,” the petition reads. “Her [failures] during the Covid-19 [coronavirus] is causing more Michiganders to get sick. Closing and banning various [nonessential businesses] and activities while leaving others open. Further promoting the pandemic.”

Residents of the state have taken to Facebook and Twitter to vent their frustration, and a public Facebook group called Michiganders Against Excessive Quarantine has more than 300,000 followers.

Tom Jipping, the deputy director of the Edwin Meese III Center for Legal and Judicial Studies at The Heritage Foundation, told The Daily Signal in an email that leaders should be careful not to jeopardize constitutional freedoms in their protective measures.

“Executive orders around the country prohibit gatherings because basic physical separation is necessary to reduce virus transmission,” Jipping said. “Orders like this, however, are harder to understand. Leaders who issue them must clearly explain both their authority to do so, and the necessity [of] taking such measures.”