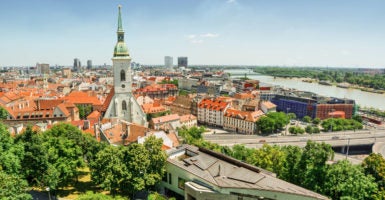 Ranked 60th in the world (out of 180 countries), Slovakia’s economic freedom score increased slightly in The Heritage Foundation’s 2020 edition of the Index of Economic Freedom. But the country’s economy remains stalled in the index’s “Moderately Free” category, where it has been for a decade.

After it gained independence from the former Czechoslovakia in 1993, market reforms made Slovakia one of Europe’s rising economic stars. Its small, open economy is driven mainly by automobile and electronics exports.

The government of former Prime Minister Peter Pellegrini, a member of powerful former Prime Minister Robert Fico’s leftist Smer (Direction-Social Democracy) party, had prioritized combating corruption and improving the quality of the public sector. But implementation of policies to achieve those goals was lackluster.

That poor performance, added to the public’s haunting memories of the party’s possible links to the 2018 slaying of a journalist and his fiancee, provided a path to landslide victory on Feb. 29 by the center-right and stridently anti-corruption OLaNO (Ordinary People) party headed by former businessman Igor Matovic, the new prime minister.

As the BBC reported, “The young reporter wrote about corrupt Slovak businessmen, EU subsidy and VAT fraud, and Italy’s notorious ‘Ndrangheta mafia and its attempts to cultivate ties with Slovak politicians.”

With public sentiment against corruption running high, the new government has an excellent opportunity to make real progress to improve Slovakia’s rule of law, one of the four pillars of economic freedom.

As the 2020 index reports, although secured interests in property and contractual rights are recognized and enforced, there’s a widespread perception of a lack of transparency and an abundance of corruption in the judicial system. That increases the risks for businesses and destroys incentives for work and entrepreneurship.

Corruption has been a long-standing problem, and few high-profile anti-corruption cases have led to convictions. Critics have long claimed that political influence impedes investigations of corruption.

It’s highly likely that this pervasive public-sector corruption has dragged down index scores on business freedom and labor freedom, too.

Not surprisingly, the index goes on to note that public administration is weak, and businesses sometimes face challenges caused by an inefficient judiciary. Workers are known for their motivation and productivity, but there is a skills mismatch that is due in part to inadequate secondary and higher education systems.

Farmers took to the streets in 2019 to protest what they saw as inequalities in the distribution of EU agricultural subsidies in the country.

Independently wealthy from his successful prior career as an entrepreneur, Matovic will have strong immunity against any attempts at bribery or malfeasance. That appears to be why the Slovaks elected him.

Let’s hope that Matovic and his new government can deliver some real progress in improving the rule of law and move up in the economic freedom rankings.