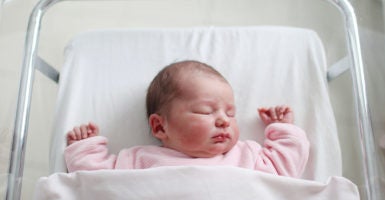 A three-judge panel of the 5th U.S. Circuit Court of Appeals affirms the state’s right to temporarily prohibit abortions until April 21 during the coronavirus pandemic. (Photo: Catherine Delahaye/Getty Images)

A three-judge panel of the 5th U.S. Circuit Court of Appeals affirmed the state’s right to temporarily prohibit abortions until April 21 during the coronavirus pandemic in a Tuesday ruling, Politico reported.

“I thank the Fifth Circuit for their attention to the health and safety needs of Texans suffering from this medical crisis,” Texas Attorney General Ken Paxton said in a statement. “Governor Abbott’s order ensures that hospital beds remain available for Coronavirus patients and personal protective equipment reaches the hardworking medical professionals who need it the most during this crisis.”

He added: “Texans must continue to work together to stop the spread of COVID-19, and we must support the health professionals on the frontlines of this battle.”

“Patients are already being forced to put their lives in harm’s way during a pandemic, and now will be forced to continue doing so to get the health care they need,” she said.

The pro-life Texas Alliance for Life applauded the decision and Paxton’s “prompt actions” in defense of Abbott’s order.

“We are very pleased with the decision of the 5th Circuit to allow Governor Abbott’s order to stand as applicable to abortion facilities just as it stands for other medical facilities,” Texas Alliance for Life Executive Director Joe Pojman said in a statement provided to The Daily Caller News Foundation.

“How many doctors and nurses have to become infected and possibly die before Planned Parenthood, Whole Woman’s Health, and other abortion facilities in Texas realize that they need to comply with the executive order, just like everyone else?” he asked.

Government affairs counsel at Americans United for Life Katie Glenn emphasized that not only is Abbott’s order reasonable, it is also necessary “to slow the spread of infectious disease in Texas, which is why doctors across all fields of medicine have complied and supported it.”

“I am delighted to see the Fifth Circuit reinstate the authority of Governor Abbott and Texas public health officials to do everything possible to flatten the curve and prevent unneeded suffering due to the Coronavirus pandemic,” Glenn said in a statement provided to The Daily Caller News Foundation.

Glenn added: “Everyone except for abortionists, who would carry on business as usual even as the rest of us make once-in-a-lifetime sacrifices to curb the spread of the pandemic. They falsely claimed that the Governor’s Order is an outright ban on abortion, even though it expires on April 21, 2020.”

Following news of the abortion ban, the Center for Reproductive Rights, Planned Parenthood Federation of America, and the Lawyering Project filed an emergency lawsuit against the state.

U.S. District Judge Lee Yeakel in Austin had ruled March 30 that the order banning abortions due to the coronavirus “prevents Texas women from exercising what the Supreme Court has declared is their fundamental constitutional right to terminate a pregnancy before a fetus is viable.”

But a U.S. appeals court ruled March 31 to temporarily allow the state to enforce the abortion ban as part of the state’s efforts to fight the coronavirus.