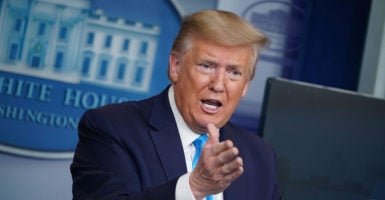 President Donald Trump floated the idea of defunding the World Health Organization after its botched response to the coronavirus pandemic on the same day the international body marked its 72nd anniversary.

During the daily press briefing on Tuesday, Trump said WHO probably knew more than it was talking about.

Trump tweeted about the matter earlier on Tuesday.

April 7, 1948 is the day that WHO—an appendage of the United Nations—began.

WHO Director-General Tedros Adhanom Ghebreyesus delivered a message about World Health Day on Tuesday, but did not directly acknowledge Trump’s earlier tweet.

“On the 7th of April 1948,  @WHO came into being. We mark this day every year as #WorldHealthDay,” the director-general tweeted. “Today & throughout 2020, we’re highlighting the vital role of nurses and midwives, as part of the International Year of the Nurse and the Midwife.”

Tedros also criticized the U.S. ban on travel from China.

“They actually criticized and disagreed with my travel ban at the time I did it. They were wrong,” Trump said during the Tuesday press briefing. “They’ve been wrong about a lot of things. They had a lot of information early. They seemed to be very China-centric. We have to look into that. So, we are going to look into it.”